How much can happen in one quarter of a year? Quite a lot, concludes swine market expert Dr John Strak in his quarterly update. African Swine Fever in China – and Belgium, ongoing trade wars, all may well disrupt global pig prices. Here is his analysis.

Since I wrote my last article on the state of the global market for pigs and pigmeat a lot has happened – in particular African Swine Fever (ASF) has been found in China and Belgium.

The former is a very significant event since there are multiple outbreaks of ASF in the pig herd in China (about 30 incidences) across a wide geographical area. And importantly, the Chinese have a reputation for not being transparent about disease outbreaks and market information. That said, the mood in the market in China seems calm and ordered.

Unclear how bad ASF outbreaks will be

An honest analyst will admit that we don’t know how bad the outbreaks are/will be in China even though the Chinese market is a very significant part of the demand for global pigmeat exports (+10% of global pork export volumes).  And matters to all those who see China as a key determinant of pig prices in the west.

A further twist in this tale is that, since the last time I wrote, the ‘trade war’ instigated by president Trump has not been defused or died down. Indeed, tariffs on Chinese goods sold to the USA and retaliatory tariffs on sales of US pork and pigmeat to China have escalated. An extraordinary game of ‘who blinks first’ is now underway between the US and China as each side increases its tariffs in response to perceived or real actions on trade policy by the other side. Let’s try and unpick how these events will affect the outlook for pig prices in the global market in the months ahead.

Before considering how things might change (for better or worse) let’s set out how the global market was likely to behave without major disease outbreaks or trade wars. That will give us a baseline for comparison.

Figure 1 illustrates the chartist’s position as described by the weighted average of key pork exporters’ prices and incorporated into a ‘Global Pig Price Index’ in the period 2011 to September 2018 (I call this the ‘world price’). That index has consistently been predicted to decline in 2018 and I have previously made it clear that my view was that the outlook for export growth and pig prices should be a cautious one in 2018.

The long run trends underlying this chart support the view that global pig prices have been in decline in 2018 and at the beginning of the summer I expected that this gloomy outlook would continue right through until at the end of the first quarter in 2019. We might have seen a turning point in the cycle in January 2019.

An important component of global pig prices is the US hog price and the short term movement in these prices in recent months have been a trader’s dream and a farmer’s nightmare. (Purchasing managers would not have been too happy either). Figure 2 illustrates this observation about US hog price behaviour.

Although the seasonal pattern of US hog prices has (just about) held up, the deviation from the pattern in recent months has been enough to give more than one market participant some sleepless nights. The expectation from these charts and other analyses was (pre-ASF in China) that the buoyant US hog scene was likely to be a bearish factor on prices in 2018. This expectation was supported by the hike in pig breeding herds and pig numbers in the EU.

It wasn’t just US farmers that were optimistic about 2018 back in 2017 when breeding decisions were made.

US market in denial about increase in hog numbers?

Some might say that the US market has been in denial about the huge increase in hog numbers and pigmeat that is in the pipeline in 2018. The impressive performance of US exporters in 2016 and 2017 has led many US farmers and packers to believe that a new world order has arrived.

There is some truth in this since the US supply chain has improved productivity at all levels and recent new investments by processors will keep that flame burning. The USA is no longer an ‘accidental’ exporter. But it’s all about timing and there is reason to believe that supply may have run ahead of demand – even without Trump’s tariffs and trade wars. That brings us to today – ASF, tariffs, etc.: let’s deal with the tariffs first.

The trade war is real and is having an impact. The impact of those tariffs and trade spats on sales of US pigmeat to China are shown in Figures 3 and 4. In the latest trade data (July) total (pork and variety meats) sales to China from the USA are down by around 1/3 but sales of offal/variety meats are down by 50%. This is likely to really hurt US packers and, in due course, US farmers. More generally, US pigmeat exports are still growing but at a much reduced rate compared with 2017. 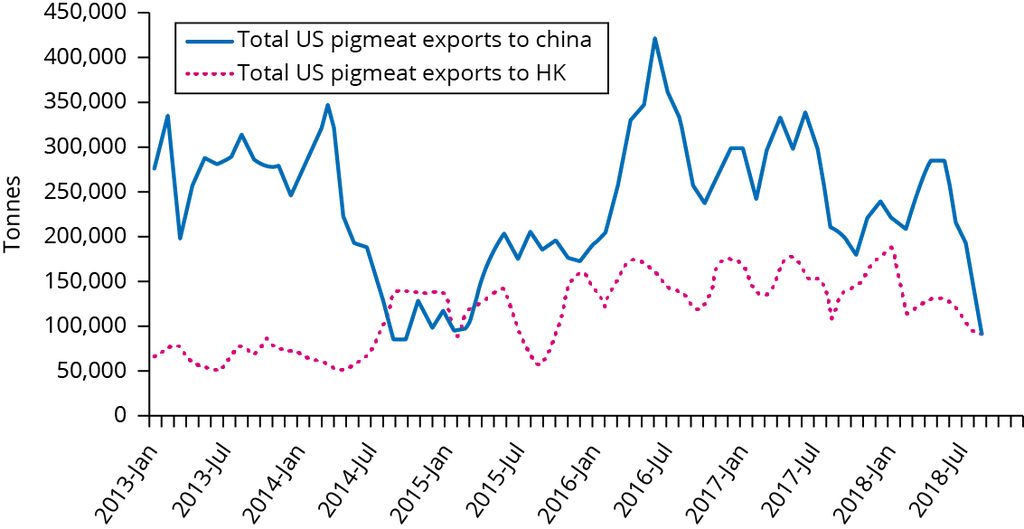 Significantly, US export values for pork and pigmeat are down by around 5% and that’s an indication of the discounts that are now being applied by sellers to allow the markets to clear when tariffs are being imposed on their customers. That’s more pain for the packers, and the farmers.

African Swine Fever: a silver lining to the cloud?

But what about ASF? Surely this is the silver lining to the cloud over China’s huge domestic pig herd (for exporters to China)? Culling the pig population and restrictions on pig movements must surely push Chinese buyers towards EU, and Canadian and maybe, US suppliers?

Even though finding reliable and detailed market information in China is as likely as spotting a dentist surgery in a hen house, Chinese hog prices can give us some clues about current market developments in China. And these prices have been rising – steeply. Figure 5 shows this movement.

However, this chart also shows that the pig price recovery in China started well before the ASF outbreaks were announced. We also know that the EU’s pigmeat exports to China haven’t jumped – they are at about the same level or slightly down on the same period in 2017.

The anecdotal evidence from China also isn’t conclusive – prices have been reported as going up in some regions of China and down in others. This reflects the problems that pig culls and movement restrictions will be causing the pork supply chain across the country.

We are left with the conclusion that, as yet, there isn’t strong evidence that ASF outbreaks in China have affected or will significantly affect global pigmeat pork exports in the next few months. It’s possible, and most likely, that the base line forecast for the next 3 months of 2018 remains unchanged i.e. global pig prices will continue to fall. But… watch this space.