China’s pig business has been going through very rapid changes in the last few years. As a result of this transformation, the once relatively isolated swine business has opened up – with tremendous consequences for the rest of the pig world.

China is capable of getting things done: big things. Yet, in contrast, as far as the pig industry goes it’s only very recently that China’s situation has been ‘big news’ on the world stage. Of course, as is shown in Figure 1, China has long been a very large producer of pork (millions of pigs and millions of pig farmers) but that production did not affect world markets and pork imports into China were relatively constant.

Global pork market did not include China

Effectively, a conversation about the global pork market didn’t include China. Furthermore, China’s pig industry was characterised by all those small, backyard pig farmers and they didn’t offer any effective demand for genetics, animal health or feedstuffs suppliers. However, all that has now changed – and change is the word that is most relevant to a review of China’s pig and pig meat production in the last five years – and more change is on the way.

If we turn the page back to 2013/14, the news media in China had a spate of stories about dead pigs being found in various public places. Local officials were castigated but these examples of malpractice and the smell and pollution from expanding, but unregulated, small pig farmers probably had a great impact on national policymakers. Low prices for pigs will also have discouraged farmers from staying in production. It’s likely all this ‘bad news about pigs’ influenced the introduction and enforcement of much stricter environmental regulations at national and local level. The net effect was a cut back in the Chinese pig breeding herd size from around 50 million sows to, maybe, 37 million as pig operations were closed down.

Figure 2 shows the pig population dropping rapidly after 2014 and this is the first example of change in the Chinese pig industry. Separately, Chinese agriculture had already begun to modernise and the 13th national plan in 2016 gave the shift from ‘small to large (modern) farms’ another push. The share of pigs produced by backyard farms will fall below 52% by the end of 2017, down from 57% in 2015, or a reduction of 66 million pigs, according to a source at Cofco Meat.

Zhang Guangan, director of the China Swine Industry Association, is reported as saying that China’s ten largest pig farming firms accounted for only 5.8% of hogs sent to slaughter last year, but that was up by 2.8% on the previous year. Their share is set to keep growing, with groups like state-owned Cofco an

the Agricultural Development Bank of China agreed to loan at least 3 trillion yuan ($ 450 billion) by 2020 for the modernisation of China’s agriculture industry. These two policy changes set the scene for the unfolding transformation of Chinese pig production.

Before any transformation could happen, of course, there was the small matter of how to supply the missing pork to Chinese consumers after the breeding herd cutback in 2014/15. As is shown in Figure 3, the short term remedy for this gap in supply was more imports. These imports started to grow in 2015 and doubled in 2016 to around 3 million tonnes per annum. China became the biggest customer for foreign pig meat in the world as well as the largest producer. This last big change brings with it something that did not exist before – a direct connection between the Chinese market and the global market in pork and pig meat. This connection has been explicitly recognised by CEOs of major pig meat processing businesses in Europe and North America – China’s consumers now directly affect pig prices in the rest of the world. For an overview of Chinese hog prices, see Figure 4. 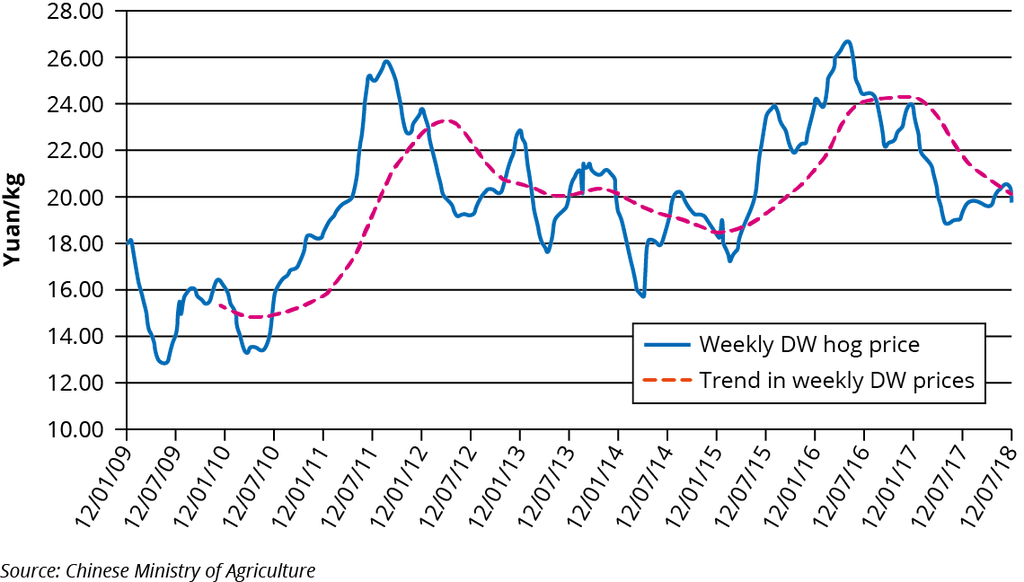 The move to larger and more capital intensive pig farming operations in China has only started but we are a long way from seeing its full consequences. One impact that is easy to forecast is the hike in demand that this modernisation has brought to western companies who supply genetics, animal health, equipment and feedstuffs. And that demand extends to ‘soft skills’ like; veterinary services, pig husbandry, and biosecurity to name but three.

With many diseases and debilitating pig conditions/poor management practices being prevalent in China – and with a reservoir of disease in the backyard pig sector – it’s likely that there will be a growth in demand for these skills and techniques for many years ahead. China’s pig production costs have been, and are, relatively high with low technical KPIs and feedstuff quality that is variable. All this required technical improvement sounds like a growth business for technical advice and know-how if ever there was one – and another big change that we will see in the Chinese pig farming sector.

Another impact that is internal to China and another big change that is worthy of note, is the drive by Beijing to attract large integrated pig production to the north east of China – close to its major grain producing area. This would help with the fight against pollution in the south and boost demand for the commodities grown in the north east.

There are reports that a minimum of eight major firms have announced or confirmed plans to produce around 17 million pigs annually in the north east. One report expects pig numbers in the northeast to eventually double to around 120 million pigs a year – that could be almost 20% of China’s annual output and equivalent to the output in Henan and Sichuan, China’s top pig producing provinces. Critics say it can be very cold there, and that it is remote. But that sounds like Canada – one of the world’s most successful pork exporters.

In summary, China’s pig and pig meat value chain is changing radically. And this is something that has only really started in the last five years but is now accelerating. Will all these plans for expansion be successful? It’s easy to be cynical but it should be remembered how far China has come since the millennium. One thing is clear: China has changed and has shown itself capable of getting big things done.