South Korea: A market with potential, and problems

South Korea’s pig industry is in constant movement. From ?having many smaller pig farms, the country is rapidly heading ?to having a lot less, but very large ones. Partly this is caused by policy movements and disease outbreaks. What is the long-term outlook?

South Korea has a population of around 50 million, is rated in the top-5 Asian economies and is the 15th largest economy in the world. It is a highly industrialised country that has transformed itself from a low income agriculture-based economy in the 1960s to an industrial powerhouse with major companies such as Samsung, Hyundai, SK Hynix, Kia Motors, Shinhan Financial Group and Posco in its stock exchange. Total exports make up over 50% of Korea’s gross domestic product (GDP) – placing it sixth in the global export league (just behind France in 2013).

Contribution of agricultural sector has shrunk

The rapid pace of industrialisation of South Korea has meant that the contribution of its agricultural sector to the national GDP has shrunk from around one quarter of GDP in 1970 to less than 3% in 2014. After the Second World War and the Korean War farmers were heavily subsidised and protected in South Korea. And they still are protected: the Organisation for Economic Co-operation and Development (OECD) estimates that its farmers enjoy a level of protection more than double the OECD average.

However, successive governments have begun to liberalise trade via the World Trade Organisation (WTO) and, latterly, through numerous free trade agreements (FTAs). Chile, the EU, Australia, the USA, and Canada have all signed FTAs with South Korea in recent years. Hence, beef and pork products from the USA, chicken from Brazil, and pork from Chile, Canada and the EU have entered South Korea and domestic agriculture has been subject to much more competition. Imported products have usually been cheaper than domestic products and the rising incomes of Korean workers and high domestic product prices have assured exporters of a ready market for their products in Korea – subject to regular protests from local farmers.

Another key aspect of the trade in livestock products has been the poor performance of biosecurity and preventative animal health regulations in Korea. The country has a history of Foot-and-Mouth Disease (FMD), swine influenza and Classical Swine Fever (CSF) outbreaks. The domestic livestock industry suffered badly from the FMD outbreaks in 2011/2012 and is now affected by PEDv and the sporadic incidence of FMD.

In summary, the long run trend is very clear – pork imports are growing. Although there have been peaks and troughs in this trend driven by trade  liberalisation (FTAs) and supply side shocks from animal disease outbreaks and feed price hikes which have opened the marketplace or affected local supplies. Domestic prices have, at times, swung wildly to reflect these influences, see also Figure 1. 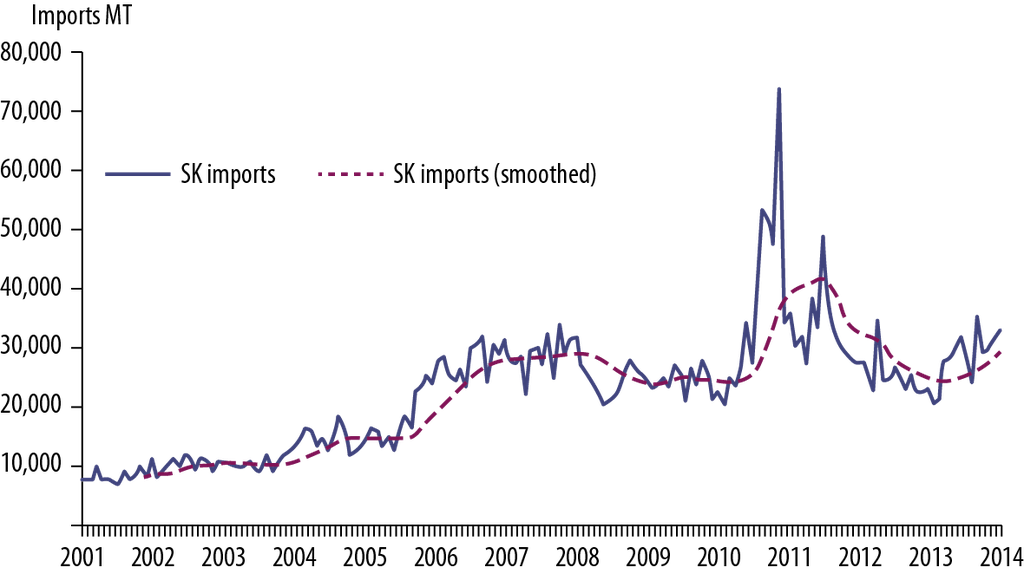 The various changes in agriculture and food policy and the disease outbreaks have affected the structure of the Korean pig industry. South Korea produces about one million metric tonnes of pig meat each year – and this places South Korea well behind Vietnam and behind, but much closer to, Japan and the Philippines, see Figure 2. The number of pig farmers and pig production units has decreased sharply – there are around 5,000 pig farms now compared with 8,000 in 2009 and 24,000 in 2000.

Although pig farm numbers have declined there has been a steady increase in total swine numbers – rising from around 8 million in 2000 to just under 10 million in 2014. Overall, the Korean industry is in a transformation phase as older less efficient small pig farms go out of business and larger, modern units come into production. The latter are, however, handicapped by the difficulties of implementing a reliable biosecurity and animal health policy across the nation.

Looking forward, the swine industry in South Korea appears to offer several opportunities. For foreign suppliers of pig meat it’s likely that South Korea will be a fruitful export market for some years to come as domestic pig meat prices are significantly higher than world market prices. Domestic producers have still some way to go in order to increase productivity and biosecurity and this is also a positive feature for overseas suppliers (and ancillary industry suppliers such as genetics and animal products).

The demand side of the equation has some pros and cons for those interested in selling to the Korean market. The Ministry of Food and Drug Safety recently announced that Koreans consumed about 44 kg of meat per person on average last year, up 22% from 36.8 kg in 2009. And pork was the most popular choice with 1.08 million tonnes consumed in 2014 (60% more than chicken and more than twice as much as beef). Indeed, meat consumption has grown over the past 40 years as per-capital income has increased in line with Korea’s industrialisation. Can it go on increasing?

Another policy that needs watching is the concept of ‘food sovereignty’ which has given some campaigning groups and farmers a platform to address the health, environment and economy – and a  reason to slow the pace of liberalised trade. On the plus side there are more gains for consumers on the way – if Korea’s complex distribution system for products is ever reformed there would be lower consumer prices.

Finally, a word of caution about the demographics of Korea: currently 17% of Koreans are over 60 and by 2050 the average age of the population will be 50. That will be the highest in the world. Worse, many of the existing pensioners in Korea are on the bread line – the OECD estimates that half of Korea’s elderly are living in poverty. If the pork industry wishes to carry on growing and achieving consumption increases in South Korea it will have to meet this particular challenge head on.

South Korea’s development is exemplary for the stages of development many pork producing countries are going through currently. Asia’s pig industry is far from uniform – there are as many development patterns as there are countries, varying from developing markets (Cambodia, Myanmar) to highly saturated markets (South Korea, Japan) and all the stages in between. In addition, the role of China is a different story in itself.

If not just one outlook is to be given for Asia, it is tempting to see which outlooks can be given for the region. And are there issues and approaches that apply to all markets, no matter whether they have great growth potential or are highly developed?

Questions that fascinate – and deserve answers for sure. Pig Progress is going to try to find these at the afternoon session of the Pork Production Summit, on Wednesday, March 11, 2015, the first day of the biannual animal  production event VIV Asia, to be held in the Bangkok International Trade and Exhibition Centre (BITEC) in Thailand. Pig Progress organises this session in cooperation with VNU Exhibitions, the organisers of VIV Asia. Helping us find the answers will be these four key  speakers with the following subjects:

Apart from the Pork Production Summit, VIV Asia 2015 (11-13 March) hosts a range of other events, including Aquatic, a new Biogas Conference and Pavilion, DairyTech Asia, and a Pet Health & Nutrition Conference. More about Biomin’s 2nd Mycotoxin event can be read on page 24. Total number of booths at VIV Asia is expected to be 850 with a projected 35,000 animal protein professionals visiting the show. In 2013, the show attracted 770  companies and over 33,000 visitors from 118 countries.