Mixing sows into groups only days after AI

As from 2013, all breeding farms in the European Union have to keep their gestating sows in group housing as from a month after insemination. Some producers, experiment further. Smeenk Farms in Haarle, the Netherlands, keeps sows in crates for only a couple of days – and with success.

Much has been written and said about it – as from 1 January 2013, all sow breeding farms in the Eureopan Union have to keep their sows in group housing as from four weeks after insemination until one week before farrowing. In the Netherlands, however, legislation laid down for breeding farms is even stricter than the EU directive. Not after four weeks, but four days post-insemination, sows ought to be sent into group housing.

Ever since 1998, when the 2013 deadline was introduced in the Netherlands, producers have gradually started moving to group housing systems. At Smeenk Farm in Haarle, Overijssel, the Netherlands, this was done when the farm expanded big time in 2008.

Prior to 2008, owner Hennie Smeenk, 50, and his wife Yvonne had been considering to move to Canada instead of expanding. After a Foot-and-Mouth Disease (FMD) outbreak in the Netherlands had kept the farm quarantined for 14 weeks, it was tempting to move away from the country, where apart from disease pressure, a climate of increasingly strict environmental and welfare legislation makes pig farming a challenging business. Eventually, personal reasons made the couple decide to stay, expand strongly (see photo 1) and become a test farm for De Heus Feeds.

The farm grew from 250 to 1,000 sows – and the new facilities were equipped with group housing systems for stable groups of approximately 50 sows each. Pen design was laid out with Electronic Sow Feeding (ESF) stations, supplied by Nedap Velos (photo 2); and he uses Topigs 20 gilts, served with a Piétrain sire line. The number of crates can be minimal as the sows only stay in there for a very short while. “Mostly they are sent back into group housing after two to three days already,” Smeenk indicates. “They will only stay in the AI section for two insemination rounds.”

The early phase of gestation is considered essential for achieving large litter sizes, hence the allowance in EU directives to keep sows in gestation crates for the first four weeks, to assure a stress-free environment for sows. Recent research at Wageningen University and Research Centre (WUR) seems to indicate, however, that the housing system does not seem to influence litter size and litter vitality. Important factors were found to be related to management, both in gilts and gestating sows – also see Box: ‘Success factors for group housing’.

The backbone of the system is a learning pen for gilts. Photo: Vincent ter Beek

In a presentation in 2010, reproduction researcher Dr Nicoline Soede, Wageningen University, dived deeper into the theme of gestating sow physiology, saying that pig embryos will be moving towards the sow’s uterus as from day four after insemination, most probably at day 6-7. They divide themselves over the uterine horns between days 7-11 and start attachment or placentation at day 11. She said that in the first month, pig embryo death is most likely – but there are many conditions that determine that outcome, like the quality of the eggs, the quality of the uterus; the eggs’ homogeneity; the space available in the uterus; sow weight loss; stress; and nutrition in early gestation.

She quoted research by Kirkwood and Zanella, in which the mixing of sows in groups at day 14 post-insemination led to lower weaning rates. Soede said: “Mixing them at day two post-insemination is not a problem, but between days 5 and 25 we should leave them alone.” She concluded, saying: “Mixing the sows leads to stress, but this does not necessarily have to lead to reproductive problems, provided that there are no other stress factors, like lack of space or aggression.”

Hennie Smeenk: “Most of our sows are sent back into group housing two to three days after insemination.”

Providing an environment that is as stress-free as possible, Smeenk Farm appears to be the living proof of this theory. Smeenk reaches impressive figures with numbers of liveborn piglets/ sow/ year amounting to 35.8 – and 31.2 weaned piglets/ sow/ year (photo 3). Average litter size is 14.4; pre-weaning mortality is 12.3%, with an aim to bring it down to 10%. In total, sows farrow 2.48 litters per year.

The backbone of the system, of course, is a learning pen (photo 4), where young incoming gilts are being trained to get used to group housing – and how to use the ESF stations. Smeenk calls it ‘the most important pen of the farm’, as without it, the mixing and keeping of group housing would not be possible.

Sending the sows back only days after inseminating is a money-saving strategy, Smeenk comments. “When keeping them in boxes for another four weeks after insemination, one needs a lot of extra gestation stalls.” Many pig farmers and other agricultural visitors have made their way to Smeenk, as to find out more, he says – but not everybody, is convinced to let the sows go back into groups so soon. Smeenk says, “Unfortunately, many producers are still enormously fearful.” 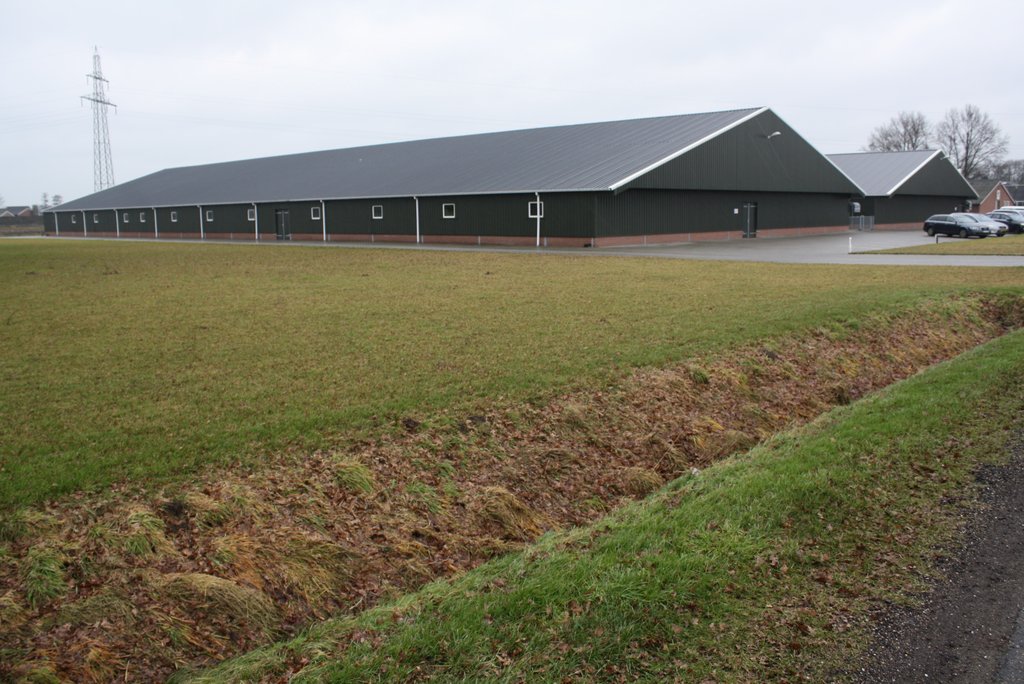 Pig semen can fly in Rwanda

Wrapping up June ’17: What’s new in the world of pigs?