Job satisfaction in a pig-friendly farm

The Bosgoed-Brink family in the Netherlands constructed a finisher pig house with pens for large groups. Both the owners and the inhabitants have been thriving and first results look promising.

Loudly gurgling, a fat, black-spotted finisher pig is speeding in between snoozing penmates towards the weighing station. There he has to wait for a second until the weighing process has been completed. Next, the animal takes a sprint around the feeding trough to go back through the one-way sluice into the lying area, disappearing from sight through a hole in the wall. The other pigs don’t seem too bothered about the noisy neighbour and continue doing what they were doing.

It is clear that pig producer Hilde Brink enjoys the sight of pigs playing. The Bosgoed-Brink family recently constructed a pig house for 2,950 finishers in large groups. The house has seven sections for 375 pigs and one for 325. This last section was made a touch smaller to allow space for a visitor room with a viewing gallery.

Opting for a large group operation wasn’t an overnight decision, Mrs Brink explains. She appreciates animal welfare, hence she wanted the pig house to allow for feeling comfortably and performing well. Having explored the market for a long time, the farm decided to opt for large groups.

She explains, “The most important reason for us to choose for this is that the pigs have a huge space at their disposal, in which it is easy to diversify between functionalities.” The animals have a special lying area, an eating and drinking zone and a space for defecation. Mrs Brink adds, “And because there’s a wall with openings in each section, the pigs can ‘flee’ when they feel unsafe.”

In the first round, the farm chose to separate barrows and gilts; in subsequent rounds, however, they were mixed. Daily growth in the second round was observed to be higher than in the same moment in the previous round.

The eating zone has been separated in 2 areas, each having two troughs. Mrs Brink uses a computerised dry feeding device by Nedap to be able to feed very meticulously. The pigs are fed 4 different diets before going to slaughter. Each feed is prepared by an own Bosgoed on-site feed plant.

The division of the eating zone is located right behind the weighing station. Depending on the weight figures that have been communicated to the weighing stations, the left or the right door will open up to the pig – and the animal can proceed to the respective troughs. This way, a pig producer is capable of providing different types of feed to the animals depending on their individual weights. Weight and feeding type are variables which can be communicated to the system using an app on the mobile phone.

The pigs will eat from so-called ‘flat troughs’. Feed will be dropped onto the plateau, and a part will roll towards the drinking nipples. Currently, there are 2 separate systems to provide drinking water; in the future one of these will be used for providing liquid feed.

Located behind the eating zone is the sorting sluice. Before transport to the slaughterhouse the weighing station will pick those animals that have reached the ideal weight. Through a middle gate, these animals are led to the sorting sluice, which opens up into a lying area behind the wall. Depending on the number of pigs, a separation can be placed in this space. Mrs Brink comments: “Pig delivery is really easy. The animals walk well as they have been enjoying much space and they are already located in a separated zone. We hardly have to chase them.”

The pig house has been provided with a direct air inlet. Once this was installed, it worked well, Mrs Brink says. Indeed, porcine cough sounds cannot be heard in the pig house.

Just like her employee Jan Klopman, Mrs Brink is enjoying viewing the animals. She says, “Jan and I share the same philosophy and thanks to him I can give my family more attention. Checking up on the animals takes a little longer than when you’d keep them in smaller groups, but all in all the pleasure in the pig house compensates for that.” 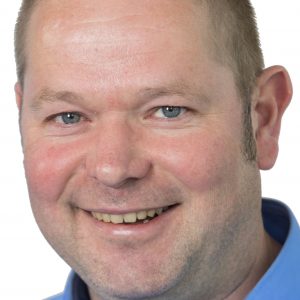