In Finland, wild boar are not only roaming the forests, they are also being farmed as their meat is considered a delicacy. Although the country is free from African Swine Fever, the virus is relatively close by in Russia, so there is constant vigilance for the virus. How are wild boar farmed there? And how can they be protected properly?

One of the easternmost wild boar farms in Finland is in Viinijärvi in Liperi, about one hour’s drive from the border with Russia. There, Juho Reinikainen runs Korpikarju Game Farm. Reinikainen says, “We bought the shelter and land from the previous farmer in 2013. After the fences had been repaired, we started to acquire animals through the Finnish Wild Pig Farmers’ Association. We bought sows and boar from a couple of different suppliers.”

So far, farming has been mainly an activity he does in addition to his day job, but Reinikainen is keen to take things to the next level. He recently invested in more animals.

Reinikainen says, “The main activity has been to bring a little more special meat onto the market. Wild boar meat is pretty much a seasonal specialty. Hams go at Christmas, and there is growing demand for a bit more special meat even at Easter. When the barbecue season begins, the demand for sausages resumes.”

In Finland, wild boar is sold not only freshly cut and processed into various forms, but also frozen and as whole wild boar. Reinikainen, who is qualified to work as a slaughterer, says, “We even deliver wild boar to parties, served and hot on the table. If customers would like me to, I can turn up at the event to cut it.”

A wild boar does not get produced in the same fashion as conventional pigs, hence payment does not follow a similar path. Production is completely market-based. The Korpikarju farm currently has 150 wild boar in an area of 2ha. The farm is divided into two parts – one for finishers, the other for sows and piglets. The farm is surrounded by a steel mesh fence, which is just over 2m tall and has been dug into the ground for at least 40cm throughout the entire length. Wild boar tend to root into the ground a lot, so the fence needs to be regularly maintained. Reinikainen says, “Every other year, we usually rent an excavator to improve the fence on the farm’s inside.”

Some wild boar sows prefer to farrow in booths made of mesh steel and plywood.

To keep out African Swine Fever (ASF), electric wires have been installed in connection with the fence, four on the outside and two on the inside of the fence. This is according to a ministerial decree from 2018, and for which wild boar farms receive a fencing grant. Inspections are made to check that the fencing is in accordance with the legislation. Reinikainen has also installed one electric wire at the top of the mesh fence. Its job is to keep lynxes and other animals outside.

Farrowing once a year

The herd of wild boar lives outside within the shelter. At the time of the visit, the landscape was muddy because of the rainy autumn days. It does not, however, seem to bother the animals. Reinikainen says, “We try to keep the pigs in as natural conditions as possible.”

That means that wild boar are allowed to be outdoors in pretty much the same conditions as they would be in the wild. However, small booths made of mesh steel and plywood are available for farrowing. Some sows use booths, whereas others prefer to farrow in a more natural nest, which they make by using round bales spread out in the enclosure.

A wild boar is leaner than a normal pig.

Currently there are 12 sows on the Korpikarju farm. The mating season lasts from October to December; the gestation period is 115 days. The sows farrow once a year in spring, at the turn of March to April, and litter size is usually four to six piglets. The piglets drink milk with their mothers until autumn. In captivity, wild boar can live for a long time; Reinikainen says his oldest sows are 12 years old, adding that they are listed to be replaced soon.

Keeping all piglets alive after farrowing

The first goal is to keep all piglets alive after farrowing. That requires the farm manager’s skill. Reinikainen says, “If one of the sows farrows before the most dominant sow does, it often happens that those piglets get eaten when they are allowed to run free.”

However, once the leader of the herd has had her piglets, the other sows are left in peace as the most dominant sow is busy taking care of her own offspring. On the whole, the sows do not need a lot of assistance during farrowing. Normally the piglets will all be born at roughly the same time.

The care of wild boar is quite simple, as the animals live free in the enclosure. However, daily monitoring is needed. Feed for wild boar consists mainly of mashed dried grains, dry hay and silage. Industrially produced mineral feed is given as supplementary feed.

Juho Reinikainen owns Korpikarju Game Farm. Ths is a wild boar farm in Liperi municipality, Finland, which has 12 sows and a total population of roughly 150 wild boar. Wild boar meat is a delicacy in Finland. At age 1.5 years, the animals are slaughtered onsite and processed in a nearby plant. The farm’s location is relatively remote, with only one pig farm in the Liperi municipality and the next being 50km away.

In the summer, the diets are supplemented with freshly mowed grass fodder. Reinikainen says with a grin, “If grass fodder, mowed anywhere, is brought here, everything is gone soon – and that includes willowherbs and nettles! Recently, we received 3m3 of wet rye that was not suitable for anything else. It disappeared immediately. A truck of unfit potatoes was eaten in ten days.”

He adds, “These animals eat everything possible. If, for example, a piglet is born with a so-called defect, it is eaten as well. This is a wildlife safety mechanism, according to which weak animals must not attract enemy animals to the scene.”

Water flows to the drinking place mostly under natural conditions.

The herd of wild boar lives outside within the shelter.

A veterinarian is needed at slaughter

Probably as a result of a varied diet and a natural life, the wild boar in the farm are healthy and there is normally no need to call a veterinarian. A vet does visit the farm to do pre-slaughter inspection. Reinikainen does the slaughter and cutting of animals himself. The animals are killed onsite using a gun, and after the blood has dripped out, Reinikainen transports the carcass to a small plant nearby. The biggest boar have to be killed with deer rifles.

The vet will re-perform carcass inspection at the end of slaughter. Trichinella samples are checked in the laboratory and if no trichinae are found, the meat can be cut. Reinikainen says, “They have never been found.”

The farm is surrounded by a steel mesh fence, which is just over 2m tall.

The flavour as ultimate goal

The farm aims for a carcass weight over 80kg. A wild boar is leaner than a normal pig, so there is less meat than a normal pig. The tenderloins generally weigh 300–350g. Reinikainen says that the goal is to produce game-flavoured wild boar meat, which means that the rearing period is long, at least a year and a half. He says, “A wild boar can be fattened quickly, but then the meat is different, rather fatty. The meat of wild-fed wild boar has a deeper shade of red than that of cattle, and it is superior to conventional pork.”

The goal has been to slaughter about 40 animals each year. The price of wild boar meat is better than the price of regular pork, but there is variation between farm sites. Meat from the farm costs € 38–56/kg, minced meat around € 20/kg, Reinikainen says.

Safety must be taken into account when dealing with wild animals. The wild boar in the shelter appear to be tame, at least when viewed from behind the fence. Reinikainen says, “They are domesticated. If one of them goes wild, it is removed, because I have to be able to work here.”

The large ones even have names. He says, “Rasputin is tame – when you scratch, then soon the animal is on its side. Sälli, on the other hand, is different. I can handle it, but it avoids humans.”

The animals have got accustomed to the sounds of cars and tractors and are not frightened by them.

Farm visits
With an interactive map Pig Progress takes you around the world one pig production farm at a time.

Recent cases of ASF in Germany have caused Reinikainen to be vigilant. He has also had to shoot wild boar around the farm’s premises. He said it would have been a good idea to build a fence at the eastern border with Russia a few years back.

Apart from the disease transmission risk, another major concern is the unrest that outside wild boar cause within the shelter. Reinikainen says, “Once one of our boar made a ditch of 15m wide to mark its own territory, when there were wild boar outside the shelter.”

Reinikainen never receives any complaints, although the farm attracts interested people – the reason he has installed camera surveillance. He says, “I open the doors when anyone asks if they can visit. Kindergarten groups have also been roasting sausages and learning about the animals.”

This article is a translated, edited and approved version of an article that was first published in the Finnish trade journal KM Vet. 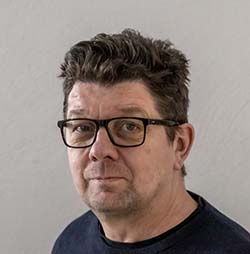