Why is the use of monoglycerides so popular?

The direct supplementation of high purity monoglycerides to feed and/or water is a popular and emerging nutritional practice. Its popularity may be down to it having many benefits and no disadvantages.

The direct supplementation of high-purity monoglycerides to feed and/or water is a popular and emerging nutritional practice. Monoglycerides of short chain and medium chain fatty acids (SCFA & MCFA’s) have a well-documented direct in vitro antimicrobial activity and are known to enhance the immunocompetence of animals. Monoglycerides improve animal gut health and reduce the risk of disease transmission in the post-antibiotic era.

The fight against pathogens

Antibiotics are defined as medicines that destroy micro-organisms or inhibit their growth. Globally, antibiotics are used in livestock production for 2 main reasons:

The curative use is intended to cure animals that typically suffer from a bacterial infection. The “antibiotic growth promoter” (AGP) use is intended to boost growth and feed efficiency in an intensified animal husbandry industry. Since the antibiotic ban in 2006 in Europe -related to the global health threat of antimicrobial resistance- alternative (nutritional) strategies have been developed and successfully implemented to promote animal gut health and to optimise production performances. Adopting a higher level of biosecurity and implementing higher value feed formulations are the new standard to replace or reduce AGPs. The effect of adding monoglycerides to feed formulations or drinking water systems has been intensively studied and tested. It is proven to be a very effective tool to help reduce the antibiotics usage by stimulating gut development, gut maturation and gut protection, and by improving the immunocompetence of animals.

Figure 1 – Esterification of capric acid to monocaprin and lauric acid to monolaurin boosts antibacterial activity. Up to 28 times less monoglyceride is needed to inhibit growth of relevant pathogens.

Monoglycerides are inspired by nature

Monoglycerides are naturally present in mothers’ milk with the aim to be biologically active along the entire intestinal tract. They are highly valued as bio-functional molecules to stimulate mucosal immunity maturation and gut development in the offspring. The antimicrobial activity of the monoglycerides of f.e. caprylic (C8), capric (C10) and lauric (C12) acid covers a wide range of pathogens, such as Gram-positive and Gram-negative bacteria, lipid-enveloped viruses, algae, fungi and protozoa. Monoglycerides are known to have a strong bacteriostatic (inhibiting) and bactericidal (killing) effect. A major benefit of monoglycerides compared to antibiotics is the fact that monoglycerides have a high selectivity of pathogen elimination, whereas antibiotics have a broad range antibacterial activity thereby also destroying beneficial gut microbiome bacteria. Different monoglycerides or combinations of monoglycerides can therefore target and suppress specific pathogen problems in a farm and boost rather than destroy beneficial bacteria.

PROVIRON MONGLYCERIDE TECHNOLOGY
Monoglycerides are formed out of one glycerol molecule and one fatty acid molecule. In the high-tech Proviron esterification process, glycerol and free fatty acids (from C3 to C12) are covalently bound to form heat and processing stable, non-smelling, pH-independent and superior antimicrobial active α-monoglycerides. 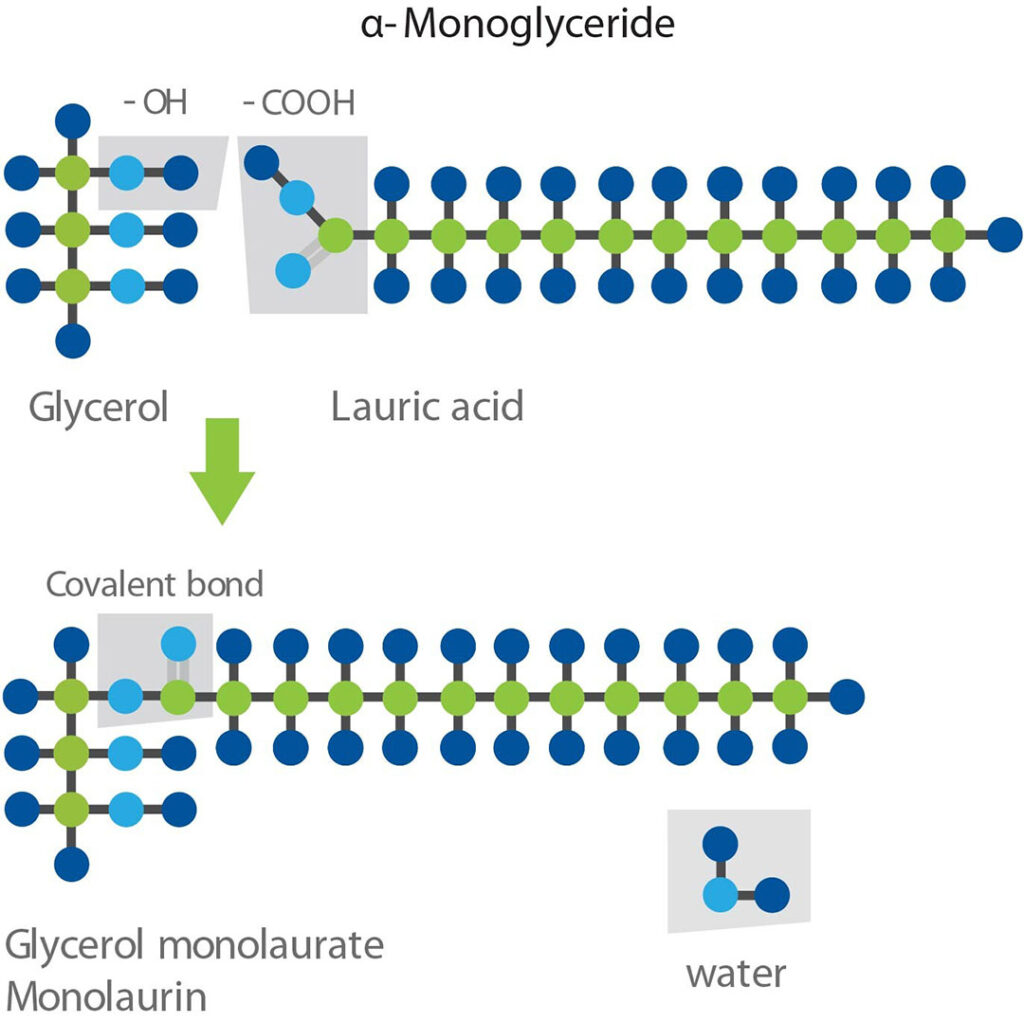 The use of organic acids such as formic, acetic, propionic, lactic, citric, or other organic acids has become common practice as a tool to support feed hygiene and digestion in young animals. Research has proven however that esterification of fatty acids to monoglycerides significantly increases the antibacterial activity, bio-effectivity, and molecular stability of SCFA & MCFA’s, making monoglycerides the next generation choice to reduces antibiotics and increase production performances (Table 1). The in vitro antimicrobial effectiveness of capric (C10) and lauric (C12) acid typically increases up to 30 times by esterification of a fatty acid to a monoglyceride. The glycerol moiety renders the fatty acids significantly more antibacterial active thanks to its emulsifying, detergent-like, properties and effect. The typical amphiphilic nature of monoglycerides -meaning that it has a hydrophilic or water-loving head, preferably positioned towards a water-environment, and a lipophilic or lipid-loving tail, preferably positioned towards a lipid-environment- causes disintegration of the bacterial membrane. Another advantage of the monoglyceride form is the pH-independency of the antimicrobial activity. A monoglyceride molecule stays lipid-active in a broad pH range, whereas free acids typically require a low pH to be optimally antibacterial.

Improving gut health is not limited to reducing the intestinal microbial load entering the animal through feeding. Mono- (and tri) glycerides of butyric acid are thoroughly investigated over the last years and are seen as the most effective tool to improve gut health by naturally stimulating mucosal maturation. The mucosal barrier is further fortified by MCFA monoglycerides which are positively modulating the immunity i.e., boosting animals’ defence mechanisms and avoiding unnecessary -energy costly- gut inflammation. .

Strategic use to promote animal health

As 60% to 80% of antibiotic usage is estimated to be related to gut health issues, it is crucial for the industry to increase gut health from the very first days. Supplementing monoglycerides from the start offers a multi-targeted approach with many benefits and no disadvantages. It provides a superior direct and selective antibacterial effect, an indirect pathogens defence effect and an optimised gut health and resilience effect, thereby optimising performance and preventing diseases. The scientifically proven and cost-effective added value of esterification makes monoglycerides the right and popular choice to reduce antibiotics and optimise animal health.

Mitigating antibiotics use in the livestock industry

Antimicrobial use: The outlook to 2030

Mindset to reduce antibiotic use is slowly changing