There is so much more to know about sows

Defining, collecting and analysing farm data can present endless opportunities. Not only does it help to gain insight into how to improve farm management – it also helps to see correlations that otherwise would remain uncovered. Which are the quantities to really look out for?

As this article will show, three other components deserve attention as well in this respect: the number of pigs born alive (PBA), preweaning mortality, and non-productive days (NPD) of female pigs. Assuming 30 PWSY in an example herd (Figure 1), one NPD equates 0.08 PWSY.

A research team at Meiji University, Japan, used 21-day preservice mean daily temperatures for individual pigs obtained from local weather stations close to the herds. This way, producers were able to predict how farrowing rates are likely to decrease by parity, based on the information from local weather news on TV.

For sows, summer servicing, lower parity, farrowing more stillborn piglets and having a WMI of seven days or more increase three types of returns. In lifetime, 33.5% of serviced females had one or more returns. These returned females had 41.5 more lifetime non-productive days than non-return females. Producers need to closely monitor females in the high risk groups to reduce their return-to-service intervals of non-productive days. 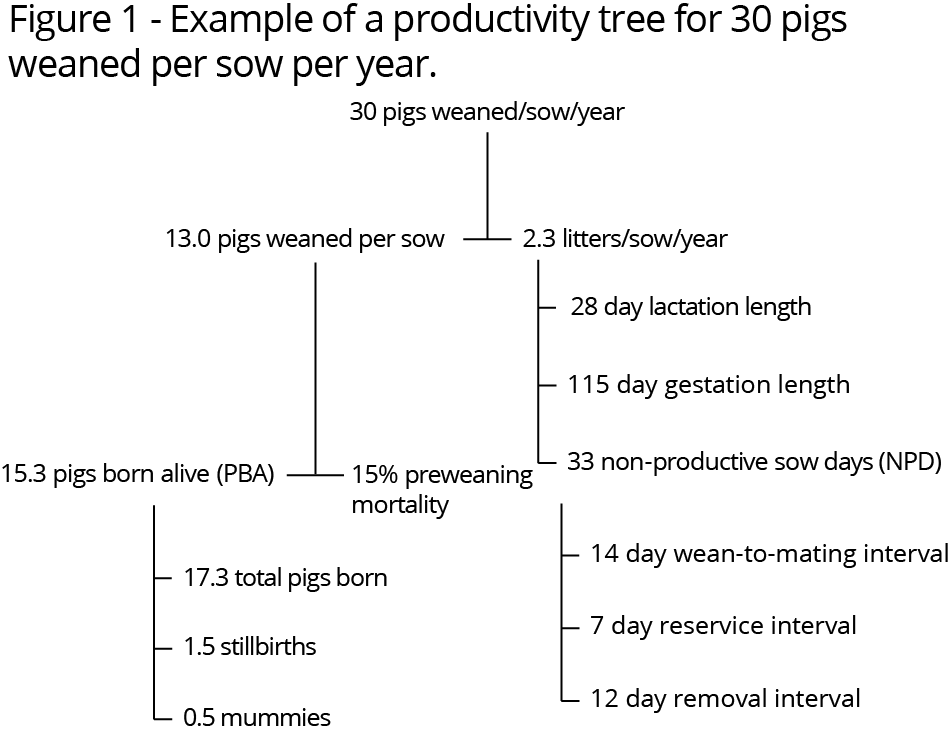 Also, the weaning-to-first mating interval can be used as a predictor for other types of reproductive performance. For example, sows with prolonged WMI will have lower farrowing rate and fewer pigs born alive. In addition, prolonged WMI is suggested to be related to a short duration of oestrus and a shorter interval between onset of oestrus and ovulation. A consequence of this is an increased risk of inseminating at a suboptimal period, which can be a major cause of low farrowing rate and fewer pigs born alive.

The number of pigs weaned depends on the pigs born alive and the pre-weaning mortality, as can be seen in Figure 1.

Delayed first-mating of gilts born in winter and spring increases the total number of pigs born alive. There is, however, only a small increase of at most 0.4 pigs, even when the gilt age increased from 200 to 300 days. So the benefit of increasing the gilt age is limited for increasing PBA. Also, no association was found between the ages and PBA for gilts born from summer to autumn. A typical approximately 240 days of age at first-mating has been practiced to increase body weights and more body reserves of replacement gilts to be first-mated.

Additionally, PBA in parity 1 is a predictor that can help producers to identify high prolific sows (super sows) at an early stage. Sows that have a high PBA in parity 1 typically produce high PBA throughout all the subsequent parities. These high prolific sows also have high lifetime reproductive performance. Gilt development is critical to have more super sows. Also, foot care for long toes or claw lesions is a good idea to keep good sows. 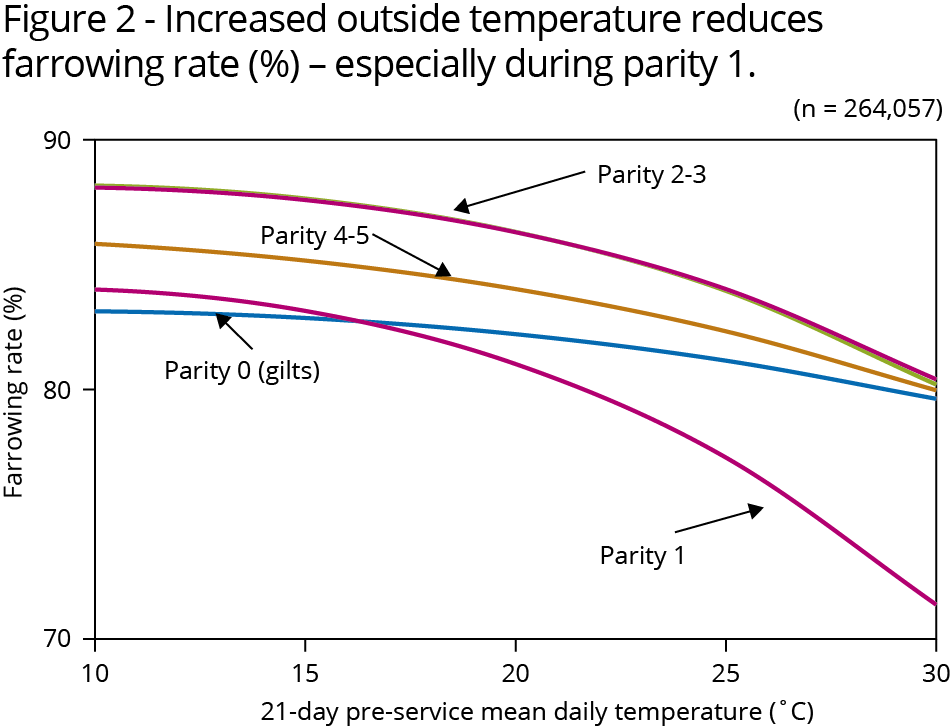 In this decade, the number of pigs born alive has increased in many countries. Genetic improvement is a driver for increasing PBA. However, increased PBA also increases preweaning mortality. Using herd level records, risk factors are farrowing more PBA, higher parity at farrowing, summer or winter farrowing, ages of 0-1 days of lactation and longer lactation length. Trauma and low variability account for 80% of reason records for death. Recommendations for sow management are assisted-farrowing following careful management and supplemental heaters in early lactation.

Mortality of gilts and sows

Increased mortality occurrences increase non-productive days and decreased numbers of pigs born alive. Farrowing is a major risk factor for sows in all parities and seasons. Approximately 68% sow deaths occurred in a six-week peripartum period. As the parity number increases, the mortality risk for sows also increases. So, parity 6 or higher sows in the peri-partum period are at the highest risk of dying. Increased care of maternal health in the peri-partum period in the farrowing barns would decrease the number of deaths of females.

Longevity is typically measured as number of parity at removal. Lower longevity in sows increases costs for replacement gilts and subpopulations of parity 0 and 1 sows which have low immune status for diseases. Also, both high efficiency and longevity can be achieved in breeding herds. In herd measurements, a lower percentage of re-serviced female pigs is associated with both higher PWSY and higher parity at removal. So increasing the farrowing rate and decreasing the number of re-serviced females are the way to go.

It is recommended that producers closely monitor the high risk female groups to reduce non-productive days and pre-weaning mortality, and increase the number of pigs born alive to improve herd productivity. Also, in most cases, reproductive performances are influenced by a set of sow factors, management factors, environment and nutritional factors depending on farms. In short – data analysis is important for each farm.