The challenge of pig production in Cameroon

Pig production in Cameroon requires good pioneering skills. With only a minimum of organised trade, high feed costs and a high disease pressure, being successful could hardly be a larger challenge. Jonas Tchinda has managed since 1978.

Forget about integrations, supermarket chains squeezing out margins or meatpackers dominating markets. For this feature Pig Progress travelled to a country where these parties have yet to come into existence. In Cameroon, the pig farm of Jonas Tchinda is among the largest that can be found – with about 400 pigs. And he sells his finishers directly to retailers – or to individuals organising festivals, to avoid the hassle of the market.

Tchinda, age 63, is based in Nkozoa  village, a suburb of the capital Yaoundé. His family-operated farm houses a broad variety of animals on a surface of about 200 m2. Not only sows, weaners and finishers, but also guinea fowl, geese, ducks and chickens. Exactly how many pigs he sells per year he prefers to keep to himself, but he does sell them at various ages – both after weaning so others can use them for further growing, and at about two years. At that age, the pigs are nice and heavy and can bring in between 300,000 and 400,000 francs (CFA), roughly between € 450 and € 600.

Jonas Tchinda, pig farmer in Cameroon: “For pork, there is no space reserved in Yaoundé markets.”

With that, Tchinda is doing good business, as pig farming in Cameroon comes with quite a number of constraints. For years, the development has been halted by diseases like swine influenza, reproductive disorders and parasites. Additionally, African Swine Fever (ASF) proved to be a big problem during 2014, causing strong price rises as it decimated the country’s pork supplies. On top of that, feed costs are usually relatively high.

Cameroon has no certified pig slaughtering or processing facilities

Concentrating on the pig industry itself, the sector still has a long way to go. On-farm, management challenges lead to a relatively low prolificacy rate and a high rate of in-breeding. On a broader scale, pig farmers are barely organised, which doesn’t help when aiming to build up proper marketing channels. Certified slaughter or processing facilities are absent, either of which could guarantee quality meat. It explains why Tchinda chooses to find his own way for marketing his meat, concluding, “For pork, there is no space reserved in Yaoundé markets. Therefore each producer is organised as he sees fit.”

Getting the most out of the pigs: some get special treatment

The Tchinda complex is divided into several compartments of 9 m² each containing one or two hybrid pig breeds. The animals are a mixture of Large White, Duroc and sometimes local breed genetics, which according to Tchinda, “are more resistant to disease outbreaks.” Crossbreeds offer one more advantage, he says, as they grow quicker. “A good pig breed is the one that weighs at least 80 pounds (36 kg) in six months.”

As a precaution, he mostly uses parent stock from his own farm, since others are often vague about the age of their animals. In order to maintain his herd, some of the pigs get a special treatment – not every male is castrated, and some gilts destined to be breeding animals receive a leaner feed than others, to ensure good breeding qualities.

Feed varies according to the type of pig

Tchinda obtains his feed from the Institute of Agricultural Research and Development (IRAD) which is located in Nkolbisson, about 6 km east of Yaoundé. In addition, he also grows it himself or purchases it from other pig breeders, especially those from western Cameroon.

He feeds his pigs with a mixture of ingredients, including brewery grains obtained from the Cameroon Breweries Company, palm kernel meal, corn, and cotton cake. In addition, often used elements are  soybeans, peanuts, fish meal, wheat bran, bone meal, sea shells, palm oil and premixes. Tchinda adds, “The proportions of the components vary according to the types of pigs. For example, the proportion of corn, peanuts and other fat- containing products found in the feed  for breeding pigs is reduced by 50% compared to pigs for commercial purposes.”

Future is bright for pig production in Cameroon

The future is nevertheless promising for Tchinda and his peers. With developments like the recent ebola outbreaks, consumption of bush meat is increasingly shunned, if it is not banned from sale in many Cameroonian localities for prevention reasons. Instead, pork is becoming more popular in homes, restaurants and even street roasters.

A higher level of organisation is therefore required. In this perspective it is noteworthy to mention a state project called ‘Improvement of Agricultural Competitiveness’ (PACA). In collaboration with the Ministry of Livestock, the country recently imported 73 breeding pigs from France – seven males and 66 females. This may be a small step on a world scale, but a giant one for Cameroon to bring high performance and new blood to the industry.

The challenges in the Cameroonian  market never caused Tchinda to lose his determination or enthusiasm. Since 1978 he has seen the sector evolve, which makes him now one of the veterans of Cameroon’s pig industry. He managed to build up a good reputation and makes a good living out of it. His residence also has a shop store front and he’s managed to send all of his children to school.

This article was was featured in Pig Progress magazine no. 1, 2015 – For a complete overview of all farm visits take a look at the interactive map 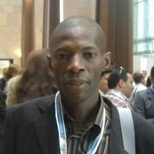