Oxidative stress is one of the processes happening inside a pig’s gut during and after weaning. Feeding trials in both China and Germany have demonstrated that high quality proteins may limit the impact of post-weaning stress syndrome.

More than 25 years of studies and practical experience on farms have demonstrated that the use of highly digestible protein in piglet starter feed results in improved weight gain, a better feed conversion rate and less diarrhoea during the critical weaning phase. While it is well known that this performance improvement is partly due to the piglets’ immature gut, which requires easily digestible nutrients, other biological processes have been less well understood.

This is starting to change. Within the past year, scientists have found strong indications of the missing link between feed proteins and piglet performance. The answer, they believe, lies with oxidative stress and related inflammatory processes.

Findings from recent studies in China and Germany suggest that, when piglets are given starter feeds containing a high quality, easily digestible soy protein, their oxidative stress level is lower – hinting at the possibility to reduce vitamin E addition in piglet diets. The German study also reports an improved inflammatory status. And, as documented in previous studies, piglet growth is improved.

The health impact of weaning

Oxidative stress is a consequence of all kinds of dietary, social and environmental stress during the life of a high-performing animal. In piglets, it is especially noticeable during the weaning phase, when young animals tend to put on less weight and are more susceptible to disease – a phenomenon known as post-weaning stress syndrome.

Social and environmental stress are difficult to avoid, but possibilities do exist to reduce dietary stress, which is typically caused by a poor-quality feed. Although such feed is typically high in protein, much of the protein content is impossible for the young animals to digest and may contain anti-nutritional factors (ANFs), such as soy antigens – factors that can trigger inflammation in the gut. The first symptoms of oxidative stress are decreased immunity, muscle degeneration, loss of appetite, diarrhoea, liver damage and apoptosis (cell death).

An opportunity to reduce vitamin E?

Vitamin E, in the form of alpha tocopherol, is a known natural antioxidant in the radical defence system. This is why many starter feeds contain an extra dose of vitamin E and other additives to support piglet growth and performance during the stressful weaning period. What the Chinese and German feeding trials suggest is that, if piglets are given feed containing a source of high quality protein, the addition of antioxidant additives may be reduced.

Both studies tested a highly digestible, speciality soy protein with a low ANF content (HP 300, Hamlet Protein) against soybean meal products with a higher content of the antigen beta-conglycinin. The trial conducted at the China Agricultural University in Beijing also evaluated the performance of fishmeal.

The studies also measured the malonyldialdehyde (MDA) level, which is a strong indicator of lipid peroxidation, and advanced oxidised protein products (AOPP), which indicate protein damage. Both reflect the level of cell damage by free radicals. 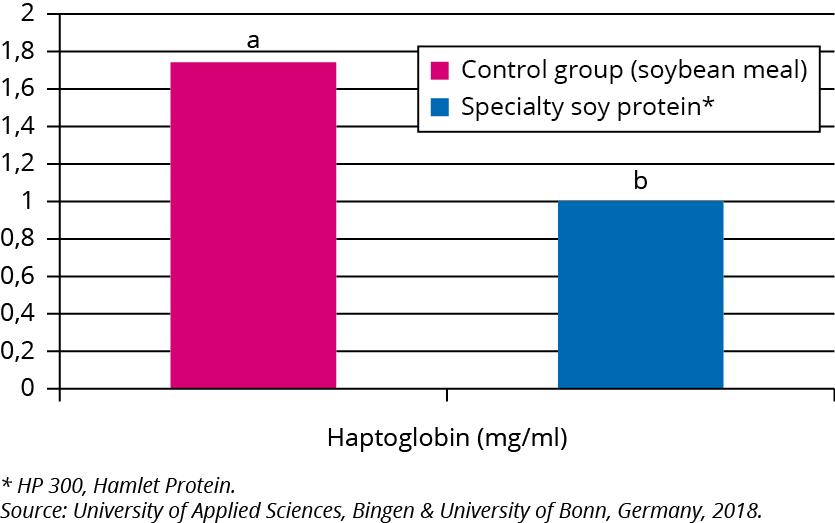 Analyses of piglet blood samples in the German study proved the close relation between oxidative stress and inflammatory processes. While oxidative status was best in piglets fed the speciality soy protein, they also showed the lowest haptoglobin values, an indicator of inflammatory status. At the same time, the level of vitamin E in the blood was higher.

This suggests that piglet immune systems are less challenged when the speciality soy protein is used in starter diets. In this way, more protein and energy are available to promote piglet growth. It is also a strong indication that the use of a high quality protein with a low ANF content may reduce the need for an extra dose of vitamin E and other feed additives with anti-oxidative properties in starter feed.

Together, these studies provide the first evidence that the choice of protein in piglet diets does have an influence on gut inflammation and oxidative status. Many studies have already documented the benefits of low-ANF soy proteins for piglet growth and performance. Further studies are now in the pipeline to confirm the indications: that the biological explanation behind these benefits is reduced oxidative stress.

More on this topic was discussed at a webinar, broadcast on November 1, 2018. View the webinar on-demand for free.

4 Strategies for getting weaned pigs started on feed