Canada’s pig inventory has been fairly stagnant since the turn of the century. Traditionally the country has been producing for exports, but with next door neighbour the US currently pursuing free trade-unfriendly policies, Canada needs to look further away.

Despite the fact that Canada’s pork exports increased by 6% from 2015 to 2016, the industry still faces a number of challenges. Most of those challenges have to do with trade deals, one that is at risk of being dismantled, one that failed, and one that could be lucrative if it weren’t for a few pesky obstacles. As it works to tackle its current challenges, Canada’s pork sector looks to the future with several goals in mind: To reduce agri-trade barriers and trade-distorting subsidies, and achieve additional market access.

It’s a little known fact that Canada produces more food than it can consume, which is why it places great importance on gaining access to international markets. Canada’s pork sector is no different. More than 70% of the pork it produces is exported to nearly 100 countries.

At home, Canada’s hog and pork industry generates $ 13.1 billion (US$ 9.8 billion) in economic activity and provides Canadians with 31,000 on-farm jobs. The Canadian Pork Council estimates than another 69,000 Canadians rely on the pork sector for their livelihoods.

Since 2000, total pig production (based on the number of pigs raised nationally) has remained fairly stagnant. Production fell fairly significantly after 2008, but has been on the rise in the past 2 years. Part of the problem might be on-farm economics. 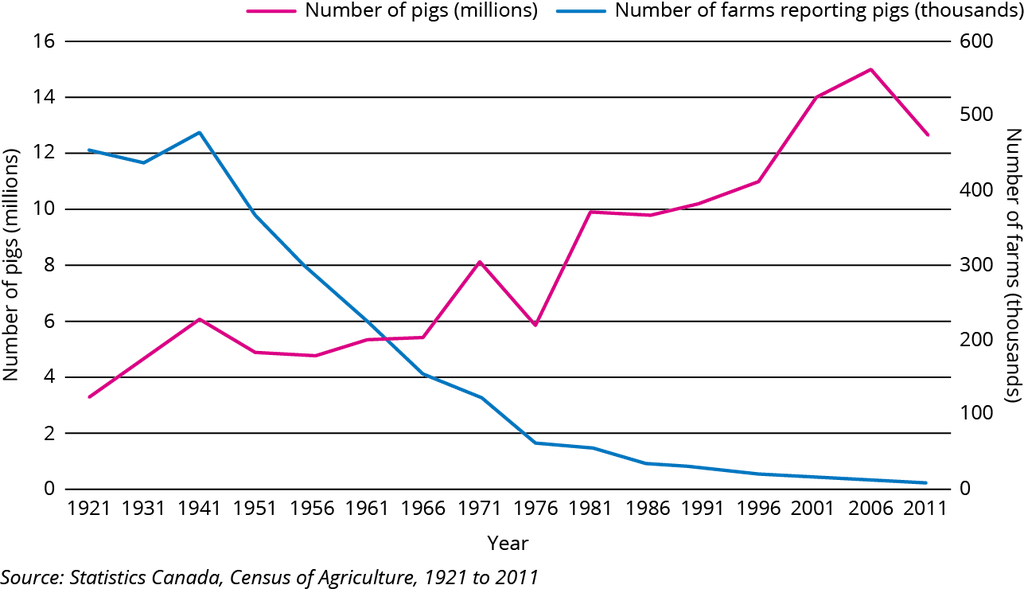 In order to lower losses, it is expected that producers will reduce the number of pigs they produce in the coming year. Canadian producers are, however, benefiting from a lower Canadian dollar. Since hog prices are based on US dollars, a lower Canadian dollar can be a huge benefit to producers, especially since the US remains Canada’s largest export market for small pigs. 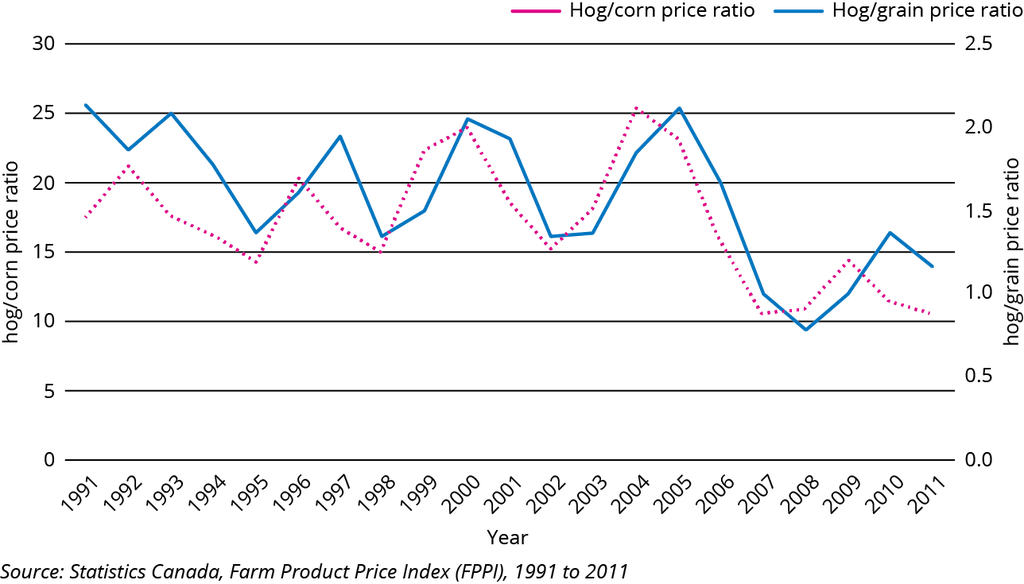 As a country that exports some 70% of the pork that it produces, Canada relies on trade agreements to ease some of the financial burden that comes with accessing international markets. Following his election, US president Donald Trump promised Americans to re-evaluate and possibly dismantle the North American Free Trade Agreement (NAFTA). If renegotiated, NAFTA could have a significant impact on Canada’s pork sector. The trade deal has been exceptionally good for Canada’s agricultural sector, and in particular, its pork sector.

One issue continued to plague relations under NAFTA and that was Country of Origin Labeling (COOL). Taking effect in March of 2009, COOL required retailers to inform customers about the country of origin of fresh fruits and vegetables, fish, shellfish, and meat products, including beef, pork, lamb, chicken and goat. Trade partners Canada and Mexico immediately challenged the move in the World Trade Organization (WTO), claiming that COOL violated trade agreements by distorting trade and reducing value and the number of cattle and hogs shipped to the US market.

In 2011, the WTO agreed, but in 2012 the US appealed. Since then, the WTO has upheld its ruling several times. In December of 2015, the WTO determined the impact of COOL to be valued at $ 1.1 billion (US$ 820 million) and gave Canada and Mexico permission to impose retaliatory tariffs against US imports. For Canada, those retaliatory tariffs totalled a significant $ 781 million (US$ 583 million). 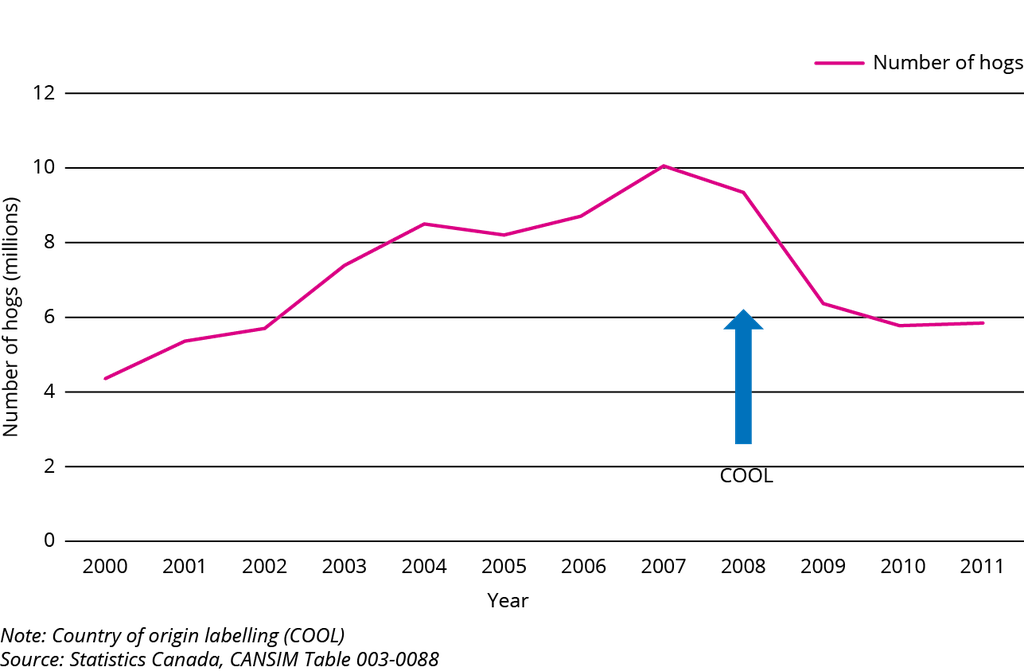 While it looks like Trump’s renegotiations of NAFTA will likely target Mexico, not Canada, the promise to revisit and potentially dismantle the trade agreement has left the agricultural sector in a state of uncertainty. It should be noted that the US exports a significant amount of pork to Mexico. If their relationship changes, movement could be affected, affecting prices. As mentioned previously, Canadian selling prices are based on prices in the US.

The US’s withdrawal from the Trans-Pacific Partnership (TPP) has pretty much crushed all hopes of the trade deal ever being finalised. The news was a crushing blow for Canada, as it was particularly interested in accessing the Japan’s lucrative market. It’s doubly disappointing, since Canada backed away from bilateral trade talks with Japan when it looked like TPP was making progress.

Options in other directions

There is still hope, though. Australia and New Zealand have suggested that it might be possible to create a similar trade deal with like-minded countries. In mid-March, Canada and China will be a joining a summit, hosted by Chile, to discuss the possibility of advancing trade in Asia-Pacific. At last count, 8 countries had agreed to attend, most of which were at the table for the failed TPP talks. Canada will attend, as will China, South Korea, Japan, Mexico, Colombia, Peru and New Zealand.

Figure 4 – Canadian hog inventory, as measured on January 1 of each year. 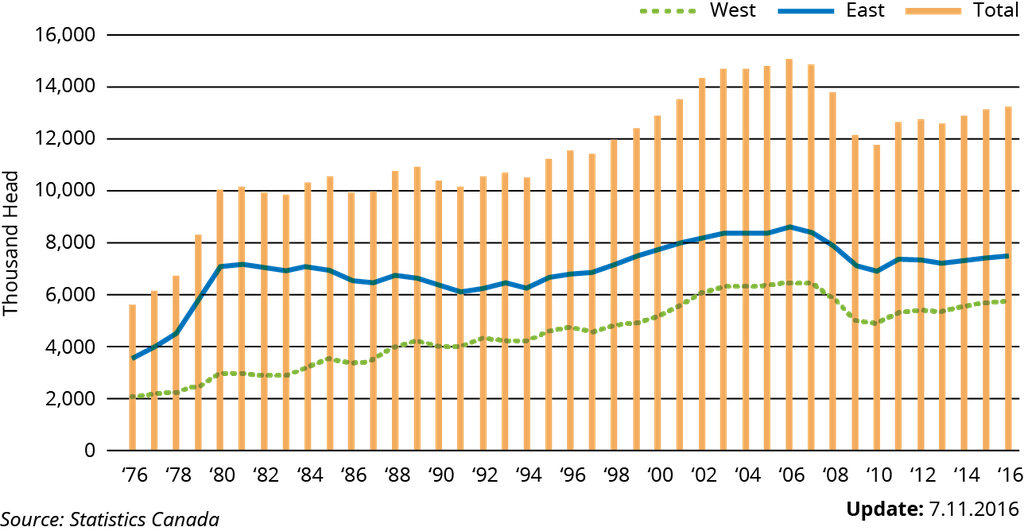 Finalised last October, the Comprehensive Economic Trade Agreement (CETA) between Canada and the European Union could bring hope to Canada’s pork sector. Under the agreement, Canada is allowed to export 81,011 tonnes of pork to the EU duty free. The quota includes fresh and frozen meat. While this news is positive, the agreement didn’t entirely remove barriers for those shipping red meat to Europe. Several issues create obstacles for the pork sector, including trichinella-free standards and EU health mark requirements.

While the EU requires product to be trichinella free, Canada is not officially recognised as being free of the worms. While Canada had hoped that it could develop trichinella-free standards similar to those set out by the World Organization for Animal Health, it is uncertain whether or not the EU would accept those standards.

Another obstacle to trade is the EU’s requirement of its own health mark on boxes of meat. The EU requires the health mark to be placed over a tamper-proof belt in the processing plant. This requirement will create additional and complicated handling logistics for those companies that ship to markets other than the EU. Not all pork in cold storage is destined for the EU.

Canada at a glance

In terms of surface, Canada is the world’s second-largest country (9,984,670 km2), only surpassed by Russia. Nevertheless, the majority of the economic activity is happening within 100 km of the US border, simply because of the climate being the best there. Pork production in Canada occurs throughout the entire country, with concentrations in Ontario in Québec in the east and in the prairie provinces Manitoba, Saskatchewan and Alberta. Not only with regard to pork, Canada is dependent on trade; the country is one of the world’s top 10 trading nations.

While the trade partners have discussed using an equivalent Canadian health mark, no agreement has been reached. Until then, it will be very difficult for Canada’s pork sector to take advantage of the new agreement under CETA.

Despite the challenges ahead, Canada’s pork producers remain optimistic. For now, it will continue pursuing its main goal: reducing agri-trade barriers and trade-distorting subsidies, and achieving international market access. 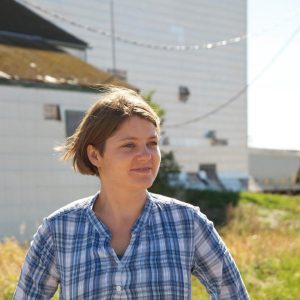