Investing in a pig’s early life pays off

Early life nutrition influences the overall performance of a pig, with the results being seen in the grower/finisher phases. Investing in early life quality nutrition will translate into positive economic results and a better health status of the animals.

Offering a milk replacer next to a sow’s milk in the first two weeks after birth and investing in a premium pre-starter diet around weaning (such as the LifeStart programme) provides short, middle and long term benefits; heavier finisher pigs, more homogeneous batches and economic gains by investing in early life. Light weight piglets benefit the most from this nutritional strategy, as recent trials have shown.

Sow prolificacy has improved over the past years, which has led to an increase in litter size and a higher variation in weight. Alongside the increase in litter size, there has also been an increase in the number of light weight piglets. These light weight piglets pose an economic disadvantage to the farmer, due to their higher risk for diseases and mortality. Nutrition and management in early life steer the within-batch homogeneity, the growth and survival rate in the nursery phase and overall performance. The rapid advancement in sow prolificacy prompts a change in the philosophy on how to raise pigs. The idea of using supplementary feeding in early life for ‘problematic’ litters but not for the complete groups deserves a review when aiming for profitability in this changing swine market.

Previous trials have demonstrated the long term economic benefit for the farmer of providing piglets with a LifeStart compared to standard practice. The next step is to demonstrate the benefits of investing in early life under field conditions, in different parts of the world, to highlight the importance of early life and how investing in the first six weeks of a piglet’s life is of substantial benefit.

In this study, the benefits of a LifeStart programme under field conditions in Belgium were investigated. The trial set-up as detailed in Figure 1, followed 50 litters (Danbred x PIC 408) from birth up to slaughter. Half of the litters were provided milk replacer (Milkiwean BabyMilk) next to sow milk up to 14 days of age and 5 kg of a premium pre-starter diet. The additional 25 litters were fed a standard feeding programme which consisted of a dry creep feed (Milkiwean Precoce) up to day 24 and 2.5 kg of a premium pre-starter diet. The total amount of feed offered between three and seven weeks of age was in both groups 10 kg. From seven weeks of age, commercial diets were provided ad libitum to all pigs until they reached slaughter weight (115 kg), following current farm practice.

Coping with the weaning challenge

When focusing on the pre-weaning phase, a clear preference in intake for the milk replacer and creep feed combination in terms of feed intake of the piglets was observed (Figure 2).

Providing supplemental milk and creep feed does not necessarily lead to a higher weaning weight. The main benefits arise from a better development of the gut pre-weaning, which helps the pig to cope with the stressful weaning challenge and reduces post-weaning diarrhoea. This is obtained by stimulating the development of the good bacteria in the intestines and reducing the time of starvation in the immediate period post-weaning. 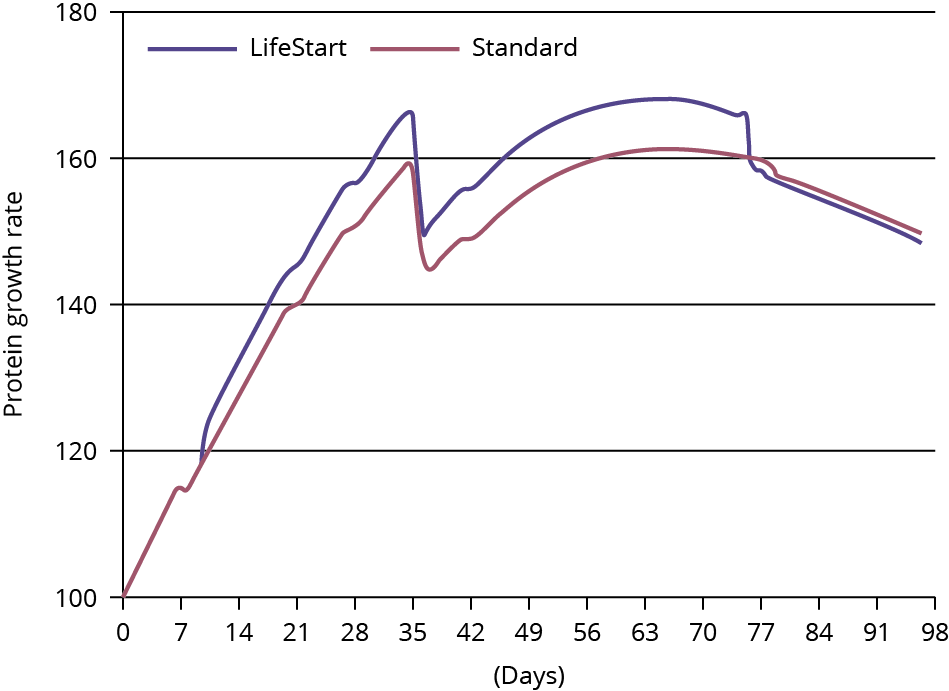 One of the most tangible parameters in terms of feed intake and utilisation is feed conversion ratio. In this trial, a better feed conversion rate in the LifeStart programme during the grower phase was observed. In the fattening phase better growth was observed, which was translated into 2.5 kg higher growth for the LifeStart group and when taking into consideration the investment on the milk replacer and the extra 2.5 kg of feed, there was an economic benefit of this investment all the way to market weight. In the Belgian circumstances, this investment into the programme translated into a €0.70 benefit per pig sold.