Leg weakness in pigs and sows aged between four and 18 months is often due to osteochondrosis. Supplementing feed with an alternative for vitamin D as from very early in the life of gilts seems to result in improved bone health.

Hyperprolific sows are more sensitive to stress and trauma and have a tendency to develop problems with their legs which can lead to difficulty standing, and even a permanent inability to stand. These locomotor disorders, such as osteochondrosis, leg weakness and arthritis, can have multiple origins. The main factors are genetics, conformation of the limbs, lack of exercise, state of the ground and nutrition.

As regards this last criterion, vitamin D plays a key role in maintaining calcium and phosphorus homeostasis and normal bone mineralisation. Excessive resorption of calcium from the bones during the reproductive cycle can in particular cause skeletal weakness and lead to lameness and even fractures. This is one of the main reasons for culling sows and reduced breeding profitability. There is only a limited understanding of the real vitamin D requirements of hyperprolific sows, and few studies have to date compared the effectiveness of different sources in pigs. DSM Nutritional Products markets the 25-OH-D3 form (also known as 25-hydroxycholecalciferol) under the name Rovimix Hy-D. Compared to traditional vitamin D3, this metabolite is absorbed more rapidly and allows more effective synthesis of the active form of vitamin D, thus contributing to improved bone health and greater productivity in sows.

Vitamin D3 is a fat-soluble vitamin and is therefore absorbed via the lymphatic system. As such, it is not active and is initially carried to the liver where it is converted (hydroxylated) into 25-OH-D3. This initial hydroxylation, which is regulated to a very limited extent or not at all, allows the vitamin D to circulate more easily in the blood system. 25-OH-D3, which is the main circulating form of the vitamin, is then subject to a second hydroxylation in the kidney to produce the active form 1-25-(OH)2-D3 (calcitriol). This reaction is closely regulated and mainly stimulated by the parathyroid hormone (PTH). 25-OH-D3, which is less hydrophobic than D3, has an advantage over traditional vitamin D as it is already hydroxylated. Because of this it avoids the liver; which is regarded as a real bottleneck significantly limiting the hydroxylation of D3; and rapidly reaches the blood stream.

The use of the commercial alternative for vitamin D3 therefore enables sows to benefit by having considerably higher circulating levels of 25-OH-D3 when compared to those sows supplemented with traditional D3, allowing their productivity needs to be better met. A supplement of 50 mcg/kg of 25-hydroxycholecalciferol in sow feed significantly increases the plasma concentration of 25-OH-D3 compared to an equivalent dose of vitamin D3 (i.e. 2,000 IU/kg feed), as shown by the dose-response study conducted by Dr Lauridsen (Aarhus University)on lactating sows (Figure 1).

Figure 1 – Influence of the source of vitamin D on blood levels of 25-OH-D3 in lactating sows. 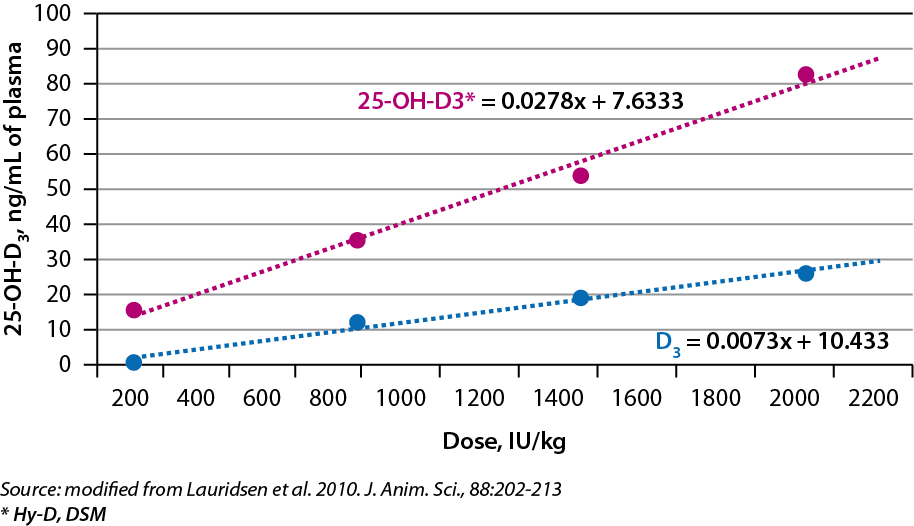 Bone mineral density Calcium, phosphorus and vitamin D play a key role in skeletal development and bone health. Supplementation of 25-OH-D3 during the gilt rearing phase prevents skeletal problems and increases the selection rate due to improved bone mineral density (Figure 2). Furthermore, guaranteeing high plasma levels of 25-OH-D3 during the critical lactation period ensures the synthesis of sufficient 1,25-dihydroxycholecalciferol. This active form of vitamin D is involved in maintaining calcium and phosphorus homeostasis by encouraging: intestinal absorption of the calcium and phosphorus; mobilisation of bone calcium; and reabsorption of phosphorus by the kidneys. Therefore, supplementing feed with the alternative for vitamin D very early on in the life of the gilt (development phase) and continuing to provide this supplement during the production phase (gestation-lactation) seems to result in improved bone health, better productivity and greater longevity, and also appears to prevent leg disorders.

Prevention of osteochondrosis in sows

Leg weakness in pigs and sows aged between four and 18 months is often due to osteochondrosis. This non-inflammatory disease results in degenerative necrosis of the joint cartilage cells. The locomotion problems caused by this disorder range from a shorter stride right up to an inability to put weight on the affected leg. Lameness can be episodic and highly variable because several joints can be affected and sows presenting with lesions do not necessarily become lame. The well-being of breeding sows is therefore negatively impacted because this painful condition is hard to detect. Over-rapid growth of the animal is often implicated. This results in the inability of the cartilaginous joint connecting the bones to withstand the mechanical force generated by the weight gain, thus causing lesions in the joint and epiphyseal cartilages. Strengthening the bones and cartilage by providing tailored vitamin and mineral nutrition during the gilt growth and fattening phase therefore seems to be an effective way of preventing osteochondrosis in sows.

The active form of vitamin D (1,25-dihydroxycholecalciferol), which is involved in the metabolism of calcium and bones, also plays an important role in cartilage development. In a study conducted in Japan, Pr Sugiyama from Niigata University (Japan) looked at the potential effect of 25-OH-D3 in terms of preventing this leg disorder. In total, 33 piglets weaned at three weeks were used in the experiment. They were divided into two groups with three repetitions per treatment: a control group received feed supplemented with vitamin D3 at 2,000 IU/kg, and a second group received feed supplemented with 25-OH-D3 at 50 mcg/kg. The pigs received the experimental feed from 6 kg to 110 kg live weight. After slaughter, the humeri and femurs of all the animals were sampled and subject to macroscopic and histopathological observations in order to assess the incidence and severity (Figure 3) of lesions in the joint cartilage.

The pigs supplemented with the commercial alternative to vitamin D, had plasma levels of 25-OH-D3 that were considerably higher than the control group, and showed a lower incidence of osteochondrosis. The percentage of cartilage lesions was in fact significantly lower for both the humerus and the femur.

Based on these macroscopic and histopathological observations, it was therefore clearly demonstrated that supplementing with 25-OH-D3 can inhibit the development of osteochondrosis and help to maintain normal endochondral ossification in pigs. 25-OH-D3 seems to act directly on the chondrocytes, which are cells involved in the synthesis and maintenance of cartilaginous tissues, and on the vitamin D receptors expressed in the joint cartilage. 25-OH-D3 also seems to have a regenerative effect on cartilaginous tissues because chondrocyte nuclei could be observed under the microscope in lesion areas.

However, a more detailed study is needed to precisely understand how 25-OH-D3 is able to prevent the development of osteochondrosis. It will be particularly interesting to study the metabolic factors that have an influence on joint cartilage, and the relationships between these factors and 25-OH-D3. 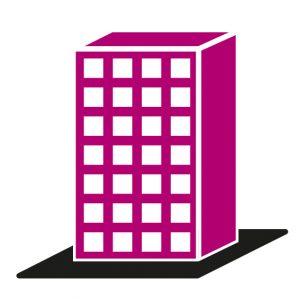