How to overcome heat stress in pigs

Economic losses due to heat stress in the US swine industry alone are estimated at US$316 million annually. Since heat stress affects the pig industry in tropical climates as well as temperate regions, here are ways to help pigs overcome heat stress with nutrition.

Losses due to heat stress include nonproductive days for sows and economic losses in growing-finishing pigs. Even in mild climate conditions such as the Netherlands pigs have problems in the summer with performance losses due heat stress (Figure 1).

Pigs are much more sensitive to hot weather than other livestock animals – largely due to the fact that pigs hardly sweat and their lungs are relatively small compared to their body size. When pigs are exposed to heat stress, their respiration rate increases, pulse rate falls, they start heavily panting and they stop eating because this contributes to further heat production. The fact that bigger pigs are more sensitive to heat stress can be clearly seen in growth performance parameters. Investigation of different weight classes (75, 80 and 28 kg body weight) showed a direct negative correlation on average daily gain (ADG) with increasing room temperature. While 75 kg pigs start to decrease their ADG at around 23°C, pigs weighing 25 kg can compensate up to 27°C (Langridge, Western Australia, 2014). A commonly accepted temperature range for sows in the farrowing house typically spans between 21°C and 25°C – though this is too big of a range. Nursery sows begin to show signs of heat stress starting at 22°C (Table 1). The feed intake drops almost 0.5 kg/day as temperature increases to 25°C.

This Vietnamese pig has found his own way of cooling down. Photo Vincent ter Beek 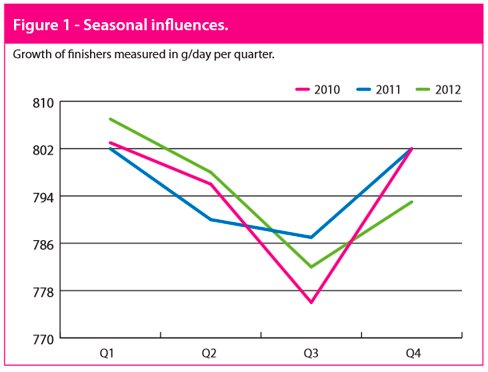 Effects of heat stress can be explained by changes in the intestinal barrier. If the barrier is impaired through heat stress, this impairment can lead to an increased permeability for endotoxins, which in turn will result in local or systemic damage or inflammatory reactions (Figure 2).

A significant increase in serum endotoxin concentrations was shown by research in 2013 when pigs were assigned to acute heat stress (35°C, 24-43% humidity) for 24 hours. Especially effects on milk production can be brought in context with endotoxin circulation as it is described that endotoxin decreases prolactin concentrations in postpartum plasma, which in turn has a negative impact on piglet development.

Technical solutions to reduce heat stress are often time  consuming and can be highly expensive, e.g. building cooled stables. A nutritional approach can prove more adaptable and quicker to implement. Based on current knowledge there are some measures we can take to improve the swine productivity during periods of heat stress. These include:

A sufficient supply of fresh, clean water. Eliminate bacterial growth in the water by adding acids, such as Biotronic SE forte Liquid or TOP liquid, to avoid infections through the system.

Wet the feed with water.
Use pelleted feed instead of mash. 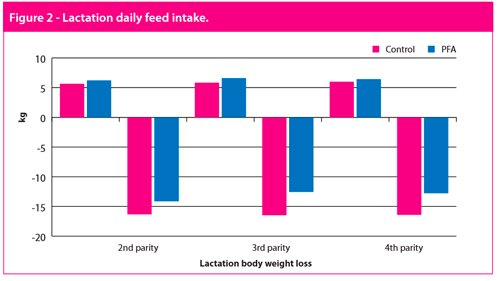 Lower crude protein. Researcher Noblet showed in a lactating trial under heat stress that sows lose less weight with a feed with lower crude protein (see Table 2). One of the explanations for this fact is that during digestion, proteins generate more metabolic heat than fats (26% against 9%), due to the complex reactions for the metabolism of the amino acids that compose them.

Replace starch with fat as an energy source. Fats are excellent sources of energy for swine to compensate for lower feed intake. Fat is also a more digestible ingredient that generates less metabolic heat during digestion compared to starch.

Less fibre. The higher the tenor of fibre of an ingredient, the worse the digestibility. Undigested fibre goes to the large intestine where it stimulates the growth of micro-organisms that will generate heat in fermentation processes.

Maintain the right electrolytic balance. As temperatures increase, an animal’s breathing tension increases. Faster respiration takes more carbon dioxide out of the blood stream which is then exhaled. This changes the pH levels in the blood, leading to metabolic acidosis and lower feed intake. Blood ‘buffers’ such as sodium bicarbonate or potassium can restore the electrolytic balance and support feed intake. 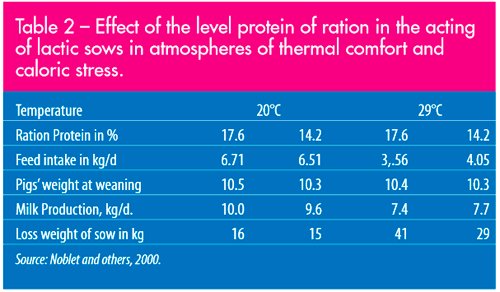 Combat toxins that negatively impact animal health. Hot and humid weather increases the chance of mycotoxin contamination on the field and under storage conditions. In heat stress conditions the liver is often under stress. This often appears as poor nutrient utilisation and/or chronic inflammation of the liver. It is important to keep the liver as healthy as possible and avoid additional stress from toxins, e.g. mycotoxins. Many trials have shown the negative effect of heat stress on development of endotoxins in the gut. A significant increase in serum endotoxin concentrations was shown in a research from 2013 when pigs were assigned to acute heat stress (35°C, 24-43% humidity) for 24 hours. Feed additives like Mycofix (Biomin) can actively combat major mycotoxins and decrease the production of pro-inflammatory cytokines.

Coming up: Webinar on heat stress in pigs, poultry and dairy cows