With the modern sow being bred to produce larger litter sizes, with a greater capacity for milk production, as well as being a leaner animal with a different metabolism, diets need to match this to ensure the production of viable, thriving piglets, while allowing sow potential to be realised.

The need for new research to understand how best to feed the modern sow is now more important than ever, with efficiencies, sustainability and welfare being key driving factors behind this.

The 60s, 70s and 90s saw peaks in research to adapt to changing sow genetics at the time. However, the modern sow has evolved again from the one that could be seen in the 90s, and therefore diets need to be adapted to ensure increasing and changing nutritional demands are met.

The stronger a piglet is at birth, the more chance it has of surviving and being productive throughout its life, whether as a breeding or meat animal. Ultimately, these outcomes are driven and attributable to genetics, health and maternal sow nutrition during gestation.

There is global demand for research that looks into the effect of maternal nutrition on piglet viability to fill the current knowledge gap in this area, and ensure pig production keeps pace with genetic potential.

In addition to this, British pig and poultry feed manufacturer ABN, and neonate nutrition company AB Neo recently commissioned a review by Dutch researchers, pulling together the current industry understanding of the effect maternal nutrition can have on piglet viability. This has concluded that two of the key areas to focus future research on, relate to the need to reduce piglet hypoxia (deprivation of oxygen) during the birthing process, and also how colostrum intake can be improved in the initial hours of life.

A 4-year PhD study is currently being carried out at the University of Leeds to investigate the effect of maternal nutrition on piglet viability. In conjunction with ABN and AB Neo, this study will look into how the sow can be best fed to produce a large litter, of good sized, viable piglets.
The study will also investigate dietary components that boost colostrum yield, and promote high concentrations of immunoglobulins in the colostrum. Ultimately the study will aim to create a diet that is optimum for the modern sow; that has the right combination of nutrients, in the right proportions to support the sow during gestation, as well as the piglet at the point of birth. The study will measure various factors such as piglet survival, piglet viability at birth, farrowing duration, and colostrum yield and composition.
The findings of the research will be a welcome addition to the industry on a global scale. It is recognised that this level of research is of paramount importance to the industry from a welfare perspective as well as addressing efficiency and profitability. The results from this research will aim to allow producers to rear more piglets per sow but in a responsible and sustainable way, through nutrition that is suited to the modern sow.

The most critical time for the piglet is just after birth. Unlike other maternal mammals, sows do not actively support the piglet once born, and will generally lie still allowing the piglets easy access to the udder.

Piglets are initially born with very limited energy resources, only enough to last 24 hours, and they have a limited ability to maintain a constant body temperature. The environment into which piglets are born is normally cooler than that in utero. This, paired with the evaporation of the amniotic fluid from the piglet at birth results in the piglet losing heat rapidly. 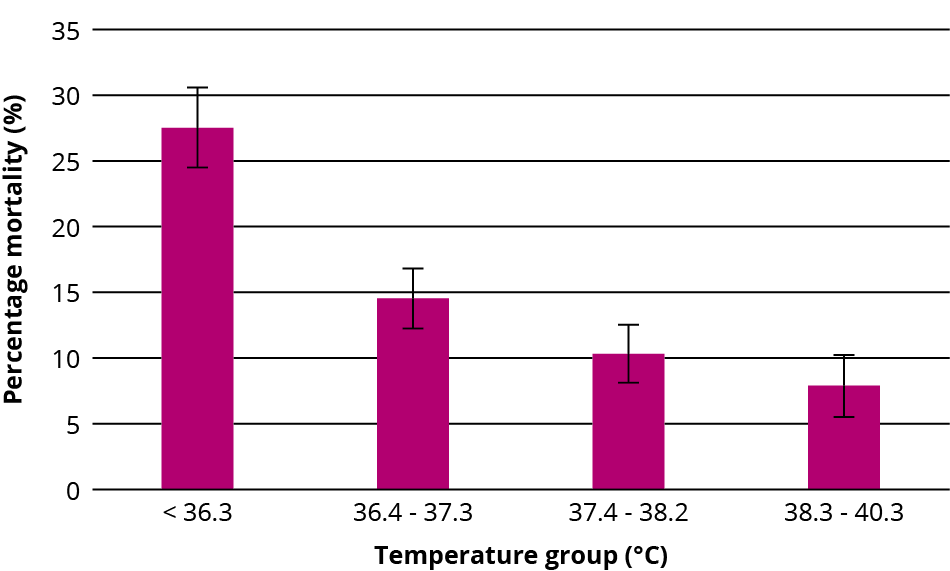 Therefore, it is critical that piglets are able to stand up quickly after birth, walk to the udder and start suckling unaided, all of which are thought to be influenced by sow nutrition during the 114 day gestation period.

The increasing trend to breed from sows that are able to produce bigger litters, can also influence piglet viability at birth, with larger litters generally extending farrowing time even when managed effectively.

Piglets at the end of the litter are at risk of compromised blood supply due to prioritisation to the contractions of the uterus, and also there is the risk that the umbilical cord may break before the piglet is born, starving it of oxygen. Piglets with low oxygen levels at birth are less likely to be able to get up as quickly as other piglets.

This, combined with a more crowded udder from the increased number of piglets produced per litter, means if piglets are not robust and viable at birth the likelihood of survival is significantly reduced.

Figure 3 demonstrates some of the research already carried out by ABN and AB Neo, with the University of Leeds, on the effect of sow diets on farrowing duration, highlighting the overall influence it can potentially have on piglet viability.

Considering these factors, future research needs to examine how sows should be fed, and what are the key macro and micro nutrients that can help ensure piglets are of a good size at birth, the farrowing process is as rapid as is sensible and piglets are immediately active at birth in order to produce a piglet that has the best chance of survival.

The sow also needs to produce high quality colostrum in the initial hours after giving birth, which is vital for piglet survival, and subsequent lifetime performance. Colostrum is the key source of energy and fat that provides piglets with a boost in the first hours of life, when energy sources are scarce.

In addition, colostrum is a source of vital immunoglobulins, providing a degree of immunity to piglets against diseases that its mother has come into contact with, and hence which are likely to threaten the piglets. Ensuring the piglet is equipped with the right complement of immunoglobulins, particularly IgG and IgA, will contribute not only to overall viability and survival in the initial critical stages of life, but will also be key for long-term health and productivity.

Colostrum also contains a variety of other nutritional factors that can help trigger a number of maturation processes, particularly along the gastro-intestinal tract, which help prepare the digestive system for life outside the uterus.

The nutritional benefit of a quality source of colostrum can’t be underestimated in pig production. Therefore, ensuring sows are fed a diet that supports colostrum quality and maximises potential yield is vital for the survival, health and long-term productivity of piglets.