Pig welfare might be improved by using genetic techniques, according to research at the University of Pennsylvania, United States.

In the United States, pressure is rising to improve the welfare of pigs in swine farms. That is why the University of Pennsylvania (UPenn) has been looking for ways to objectively measure the level animal welfare. The university is hoping that in that way, it is easier to debate issues with societal organisations. Key tool in the university’s approach: genetic techniques.

Measuring cortisol levels is not enough

The 4-year research is being done at the university’s trial farm in Kennett Square, PA, at about 50 km west of Philadelphia. It is just not accurate enough to measure the levels of stress hormone cortisol in blood, stated associate Prof Thomas D. Parsons, specialised in swine production medicine.

He explained, “That is why we have just started a research to telomeres. Those are amino acids at the extremes of each chromosome. When humans or animals age, the telomeres tend to become shorter. Moments of stress do accelerate this shortening. What we will do is continuously measure the length of telomeres during a pig’s life. That way we hope to figure out which circumstances yield the least amount of stress. We hope that this will lead to a method to objectively measure animal welfare.”

A link between telomeres and stress in birds

In birds, a clear relationship is existing between the length of telomeres and stress levels. Prof Parsons said, “In case we can also demonstrate this in pigs, it will provide more tangible proof in all discussions around animal welfare. These days often these discussions are often based on what might be nice for swine.”

In the United States, the animal welfare debate started to catch on just before the year 2000, when gradually opposition against sow stalls started to grow. For that reason, in 1998, the university constructed the trial facility to research sow and piglet housing. Prof Parsons: “As academics, we wanted to be ahead of developments which US sow breeders might meet in the future. We would like to help them to switch to housing systems with more liberty.”

The trial facility consists of a group housing system for gestating sows. Part of this facility has a straw bedding. Parsons stated that quite a number of sows prefer the concrete floor above the straw bedding. He said, “Apparently there are other factors determining where sows prefer to lay down.”

One factor might be social hierarchy, which is why the trial unit aims to determine whether it is possible to objectively determine a pig’s character.

The importance of the telomere research

Prof Parsons commented: “That way it is possible to place sows with each other that actually match best. Of course this will give practical problems, but perhaps it will give more insight into sows’ natural behaviour. Some sows simply turn out not to be able to function well in groups. We also measure animal welfare using pedometers. Even that is not a completely reliable indication. Exactly that is why the telomere research might help us to make the next step towards a higher animal welfare. After all, also in the US pork producers will face that.” 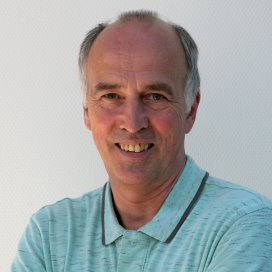