What is the correlation between haemoglobin levels and growth potential within a pig herd, and equally important, how can the modern swine producer respond to an anaemic herd to optimise its growth potential?

Three current studies provide the essential information you need about anaemia, haemoglobin levels and additional iron treatment. While this is an area of interest, it is sometimes neglected in both commercial and scientific communities. This research shows remarkable findings such as the fact that many piglets are anaemic – even on well-managed farms, and improving their haemoglobin levels can directly impact growth results. An additional iron injection to optimise the piglets’ growth potential is one of the ways in which this research can be supported.

Iron is a trace element and a vital constituent of haemoglobin. Piglets are predisposed to iron deficiency anaemia as a result of their low body iron at birth, an inadequate supply of iron from milk, no source of environmental iron, and a rapid growth rate. 200 mg of injectable iron given at day 1 to 4 is generally accepted as the most effective method of preventing piglet anaemia. However, studies have suggested that this single dose may be insufficient to ensure the greatest nursery performance. A study in 2014 investigated the prevalence of anaemia and whether 200 mg of iron dextran at weaning would reduce the risk of iron deficiency anaemia in nursery piglets.

A clinical trial was conducted at a commercial swine farm where a high proportion of piglets were anaemic at weaning. The piglets were assigned to treatment/control groups balanced for sex using simple randomisation. Group 1 were provided 200 mg iron dextran at processing and at weaning. Group 2 were provided 200 mg of iron dextran at processing and 1 cc saline at weaning. Average daily gain at weaning to 14-days post-weaning was not significantly different between the control groups (293 g/day) and treated groups (290 g/day), and the frequency of iron deficiency anaemia in nursery piglets was reduced by 50% if supplemented with an extra injection of iron dextran at weaning (Figure 1). All in all, the study concluded that an iron dextran injection (200 mg) at weaning reduced the prevalence and severity of anaemia in nursery piglets and it indicates that many piglets may be anaemic even on well-managed farms. 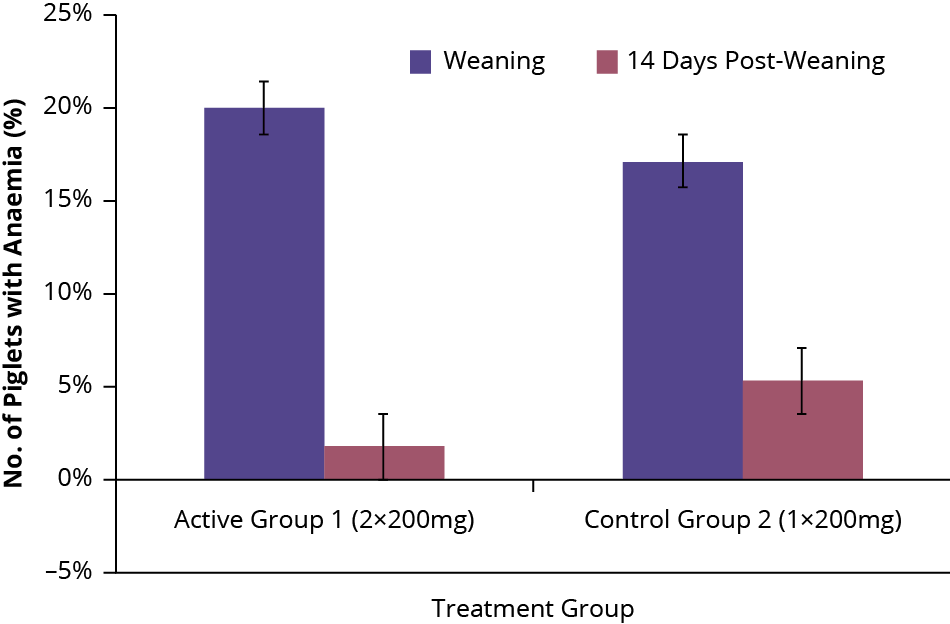 Correlation between anaemia, haemoglobin and growth

As a swine producer, it is crucial to understand the negative growth impact of having an anaemic herd. A study from 2015 investigated the association between haematological parameters at weaning and post-weaning weight gain in piglets. Five well-managed conventional herds with an average herd size of 1,000 sows were selected. All herds were provided a single injectable iron supplementation from different commercial products at 3-4 days of life. 99 piglets were randomly selected, and blood samples were taken from them at 1–3 days before weaning. The associations between each measured haematological parameter and the average daily gain (ADG) of piglets in a three-week period were tested.

This study showed a positive association between haemoglobin and ADG in the three-week period, and also, red blood cells and haematocrit had a positive association with ADG. An increase in 10 g haemoglobin/l blood corresponded to a weight gain improvement of 17.2 g daily weight gain in the three weeks post-weaning period (Figure 2). During the first weeks after weaning, the regulation of intestinal absorption may not be fully functional, which could partly explain the importance of improved haematological status at weaning for the improved post-weaning growth in piglets.

If a herd is anaemic, how is it possible to correct the haemoglobin levels to achieve optimal growth results? Earlier studies have shown that an additional iron injection resulted in greater growth post-weaning in piglets. This may be due to improved oxygen transport, immune function, vitality, metabolism, and intestinal health in the piglets as haemoglobin levels increase.

A well-recognised study from 2008 investigated whether piglets supplemented with iron through an injection of 200 mg of iron dextran, the product Uniferon from Pharmacosmos, at day 3 and a 2nd injection of 200 mg iron dextran at day 20 of life (trial group 2) would develop a higher haemoglobin content at weaning and grow faster from life day 20 to 34 (weaning age) and from life day 34 to day 50. The trial was set up in a 500 sow production unit, and blood samples were taken at day 20 and day 34 (at weaning) to measure content of haemoglobin. Weighing was performed at day 0, 20, 34 and 50 after birth. 236 piglets were included. They all showed a high potential for growth and performed well until weaning except 14 piglets that were excluded.

The study showed a significantly higher growth rate post-weaning and significantly higher content of haemoglobin at weaning in pigs from trial group 2 (iron supplemented at day 3 and day 20) compared to trial group 1 (iron supplemented at day 3) (see Table 1). The iron content in both groups was considered adequate, but this trial showed a higher average growth after weaning if there was a higher average haemoglobin, thus indicating that piglets’ growth rate would increase after weaning if they were supplemented with an extra injection of the iron dextran product.

Iron is beneficial for all pigs

Earlier trials have shown that iron supplementation was indicated only for the largest half of a piglet population. This study could not find a difference when separating in large and small pools of pigs, but on the contrary, found that all pigs on average would benefit from an extra injection. This may be due to the fact that all pigs were growing very well, due to high birth weight, and the study confirmed the assumption that fast growing and healthy pigs need to be supplemented with more iron than the usual 200 mg used at day 1-4 of life.

In short, Haemoglobin levels and growth are closely related, and there is an unexploited potential in assessing and correcting haemoglobin levels in piglets even on well-managed farms. To this end, a second injectable iron injection has proven effective in order to reach the growth potential within the herd.

References and SPC available upon request.

On demand: Webinar on piglets and weaning challenges

Popcorn for piglets – how to enhance digestibility?