Liquid feed is a great way to ferment protein-rich, home-grown fodder such as rape seed oil meal, peas and field beans or recycle liquid co-products from the human food industry into pig feed.

Non-fermented is mainly used and is simply a matter of mixing the cereals or complete feed with water and minerals. It takes around 2-4 minutes of mixing time (sometimes up to an hour).

The fermented version takes much longer to prepare, a few hours to 6-12 hours on average. The latter is of particular interest as it is known for its positive effect on intestinal health and Salmonella control. Especially in line with the pressure on using antibiotics to treat digestive disorders in pigs and the tight margins in the pig industry, fermented liquid feed is gaining interest, so it seems. Denmark has been a large user of fermented feed, mainly to control Salmonella as part of their strict national control plan for Salmonella reduction in the Danish food chain.

However, the use of fermented feed is not the way to go for all pig farms, as it need some adjustments to the farm (an example of liquid feed distribution is shown in this video) It really depends on the type of farm and whether critical points can be met to make this type of feeding a successful one. 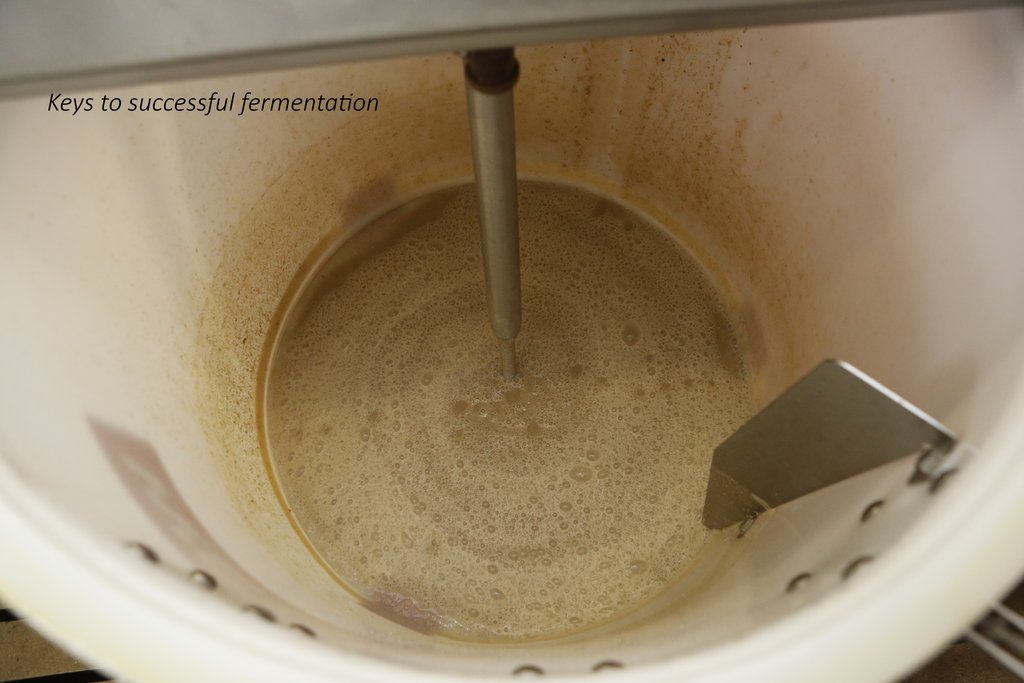 The practise of feeding fermented feed to pigs caught my interest again when I attended a seminar in Vienna, organised by Lallemand Animal Nutrition. Julien Delforge from this company gave a great presentation about the importance of the microbiology when farmers start using fermented feed. He explained that it is a good thing when lactic acid production is boosted with the fermentation process, as lactic acid is a palatable acid for the pigs. Unfortunately, also bacteria can grow in the feed and hence start producing other acids such as acetic acid. This has a negative effect on the palatability of the feed, which in turn can result in lower feed intake.

Delforge explained, “The art of fermentation is thus to keep those bacteria out that also produce the unwanted acids. This can for example be done by cleaning the feed before it is fermented, as there is always some wild contamination of unwanted microbes in cereals. Cleaning cereals can for example be done with a cereal cleaner system (physical separation of dust / cereal), which is used by some farmers.” It was shown that unwanted enterobacteria, yeasts and moulds was reduced considerably by doing this.

Also recently, I came across the ‘fermentation index’, developed by Dutch Animal Nutrition company Royal De Heus to determine the course of the fermentation process in an objective way. This index gives farmers, based on a series of indicators, a score on a scale of 1 to 10.

The higher the score means the better the fermentation process has been successful. The index is a combination of lactic acid and acedic acid (relatively and absolutely), buffer capacity, pH and dry matter content. De Heus developed the CombiFerm-concept, which combines three steps:

2) preparation of the Optimix, a grain mixture, that fits with the Optistart; and

3) the fermentation is done (10-12 hours), resulting in a feed with a pH f 3.6 and an ideal lactic acid/acetic acid balance.

According to De Heus, this concept, in combination with the right fermentation index score, can lead to an increase of profit per animal of up to 6% (average income per pig minus the costs for piglets, feed and loss). The company Schaumann has also been in the news regarding this topic. They have developed a new starter culture for liquid feed diets.

Their new product is specially developed for use in high-protein and low-starch and low-sugar feed mixes. According to them, the combination of highly effective specialist lactic acid bacteria ensures a high degree of lactic acid formation which has the effect of rapidly reducing pH, improving the digestibility of phosphorus and protein and suppressing undesirable microorganisms (e.g. Salmonella and yeasts).

I agree with the people from the University of Ghent who state that: “Since the announcement of the ban on the use of antibiotics as antimicrobial growth promoters in the feed of pigs in 2006 the investigation towards alternative feed additives has augmented considerably. Although fermented liquid feed is not an additive, but a feeding strategy, the experimental work examining its possible advantages also saw a rise.”

I am curious to know whether the antibiotic ban and the increased interest in and knowledge about intestinal health has really led to an increased use of fermented liquid feed in pig farms in Europe (or anywhere in the world?).

Comments can be left below!