It is well known in swine husbandry that the weaning period is the most critical period in a piglet’s life. Around weaning piglets are facing environmental, nutritional, social and managerial changes. The use of medium chain fatty acids in this stage can have a valuable effect on immunity.

The short term consequences of piglets facing all these stress factors during weaning will be a retarded feed intake and growth which in the end can lead to diarrhoea and immunity suppression. Nuscience is specialised in the use of medium chain fatty acids (Aromabiotic) for supporting the overall immunity.

The first 24 hours a sow produces colostrum, containing besides a lot of energy also large amounts of immunoglobulines G (IgG), known as the passive immunity. After 24 hours the gut of the piglet closes, and is not able to absorb immunoglobulines anymore. The amount of IgG (received from the sow) in the body of the piglets will decrease almost exponentially in time (Figure 1). As the piglet becomes older it starts to produce antibodies on its own, a proces which is fully developed when piglets are about 8 weeks old (Active Immunity). A very low overall immunity around weaning in combination with a high level of stress results in the post weaning immunity gap. 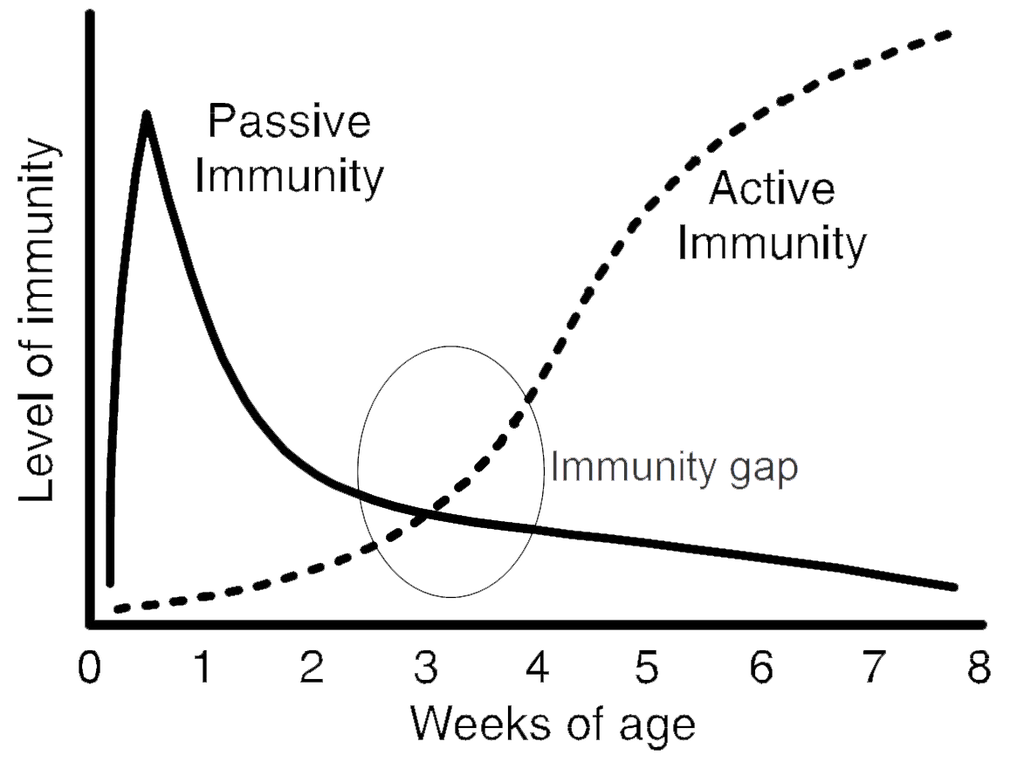 Trying to close this gap Nuscience succesfully developed Aromabiotic, a mixture of well defined medium chain fatty acids (MCFA) with a proven effect on immunity. This was well described in a report of the University of Wageningen (van Krimpen et al., 2014) , being an overview of 15 years of testing feed additives. Most of these additives had some positive local effects in the gut, but when the researchers looked at the veterinary treatments, the only additive which had a significant effect was Aromabiotic (see Table 1; difference pulmonary disorders was significant).

The excellent antibacterial activity of the product is generally accepted & described. Besides this antibacterial activity, adding the product in the feed seems to have similar supportive effects against encapsuled viruses. This was seen in a field trial where the supportive effect against Porcine reproductive & respiratory syndrome (PRRS) was tested. In this trial the piglets were divided in two groups. The control group, and a group which receiving Aromabiotic at 3kg/ton. Blood samples were taken at weaning, 30 days after weaning and 60 days after weaning and analysed on PRRS with a real-time PCR method and an Elisa for PRRS (Figure 2). 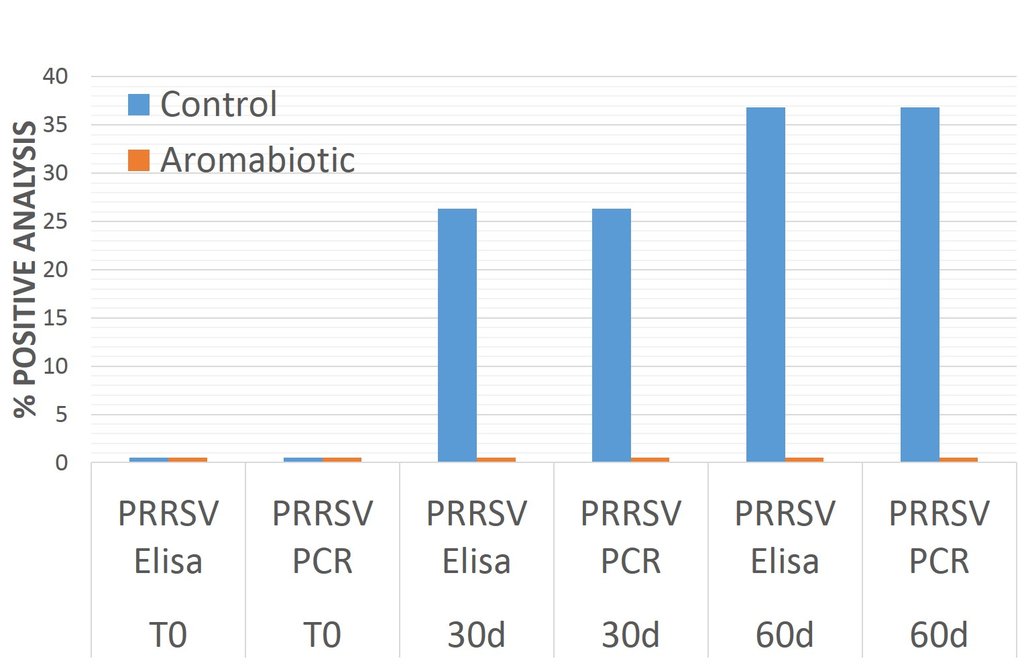 Both on PCR and Elisa analysis showed simular results: no PRRS could be detected in the Arombiotic group, while in the control group (low) levels of positive samples were detected at day 30 and 60. In this trial Aromabiotic was clearly able to reduce the % of positive blood samples. More research is needed to unravel the exact mode of action.

At the time of weaning the immature immune system of the piglets is under a lot of pressure. This is the time where bacteria and viruses start attacking the piglets. Sometimes disease is shown immediately (eg weaning diarrhoea), sometimes the disease has a longer incubation period and is only seen 2-3 weeks after weaning or even later. Aromabiotc can provide the piglets with some extra immunity support around weaning, which will for sure not be too much luxury for these young animals.