A sense of pride from free access stall use

A sense of pride comes over Danish farm manager Henrik Mikkelsen when seeing that his sows are in good shape. He keeps his sows in a free access group housing system during gestation. One stall, one sow – and it works fine.

It is only one year ago, that production went up to 100% at the new farrow-to-finish production facility at Risgaarden near Viborg, Denmark. These days, the conception rate in the dry sow unit is 95%, achieving 33 piglets weaned/sow/year. A housing system that places the different units in a logical way and a pen design which optimises the individual sow’s performance are just some of the reasons for the fast results. Add to that the farm staff’s energy – and there’s a recipe for success.

Risgaarden from the outside does not appear to be a pig farm. Arriving at the site, a huge administration plus canteen unit can be seen on one side of the alley and offices and changing rooms for both sexes on the other. All individuals entering and leaving the stalls have to change clothes and take a bath, making the administration unit a clean and scentless area.

For Henrik Mikkelsen, farm manager, the complex is his life. He explains, “I’m a free man here. My job is to be where I’m needed.” He is responsible for five employees as well as all feed production. Two employees are Ukrainian; the others are Danish. Soon two Romanians will join the team. To be sure that everybody is doing what is necessary, Mikkelsen talks a lot with them. “I see to it that we have two breaks every day together – this is when we talk about things. This also means that I can catch up with situations before they become habits which may be no good,” he says.

The service unit consists of 450 stalls of 70 cm wide, manufactured by the Danish company Egebjerg International, just like most other housing equipment on the farm. In an adjacent unit, there is an area with an additional 246 stalls – 106 of which are for gilts (60 cm wide) and an additional 138 stalls (70 cm) wide for more sows. The boars are kept in pens in a separate boar unit.
“We collect our own boar semen and use the boars when we serve using artificial insemination. We have a boar robot in which we transport the boar in front of the sows that we serve. This reduces the time we use for service quite a lot due to faster uptake of semen by the sows when they smell and get in contact with the boar,” Mikkelsen adds.
The six rows in the service area consist of 75 stalls each. The stalls are wide and open which makes them perfect for the service job. Each week 80 sows and 20 gilts sows are being served. “Several sows are served at a time, because we use the boar robot and a ‘stimulus’. The stimulus is an automatic stimulation device, which we hang over the back of the sow. Each stimulus is connected to an air pipe, doing correct and thorough stimulation.” When a sow is served they move the device to a next sow, which has just been in contact with the boar and is therefore ready to take the semen.
“It takes two employees approximately 2.5 hours in two days to serve 80 sows, this includes the time they use to get the boar into the robot, prepare the semen, etc.” And with a conception rate of 95% he can’t see why they should serve in a different way than this.
Group housing
Sows and gilts are serviced in one unit. After about 3 or 3.5 weeks they are moved into a group housing area. There are two of these units at Risgaarden, each with 20 pens consisting of 26 free access stalls. Mikkelsen discovered how they can avoid aggression when mixing a new group of sows in the housing system. He says, “After we have moved the sows, we lock them up in the stalls for a couple of days. Then they can get used to the new surroundings and some of the other sows, without getting into fights from day one. This works.”
The free access stalls are usually open. When a sow enters a stall, however, a side-hinged front wing is activated, which will close the rear gate behind her, meaning she is safe. Any sow can leave the stall by activating a mechanism when she moves backwards against the rear gate, which will then unlock. In addition, the stalls can be locked and unlocked centrally. It is also possible to close and lock the individual stalls manually, if a sow needs separating from the group.
Experience tells that sows spend most of their time relaxing in their stalls, which makes management relatively simple. Mikkelsen says, “Due to the side-hinged front wing the stall is completely open at the top. This makes it very easy to work with.” Vaccinating takes about one hour a week. Three sows can be vaccinated from one stall.
Easy job
As from 7.15am, one of the employees checks all sows in the gestation units, wiping concrete slats in case they are too slippery and giving the sows more straw. At about 9am, all 40 pens have been taken care of and each sow has been checked.
Mikkelsen says, “The system works perfect. We have an easy overview and it gives me my professional pride when I can see the sows are in good shape, healthy, calm and comfortable. They are all out of the stall every day to get some straw, but they can choose where they want to be.” 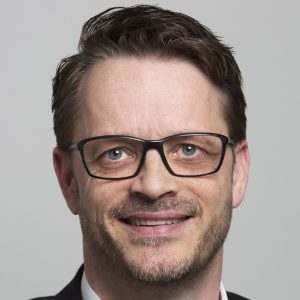 Interview: Leading a teenager to adulthood

40% of R&D resources are dedicated to improving piglet survival

How to improve PRRS control in 10 steps