Twenty years ago the Soviet Union dissolved and many new nations arose. Seven years later, in 1998, the Russian rouble had lost 75% of its value and the economy of the country fell into ruins. Out of the rubble and chaos, new rich Russian oligarchs that came to create enormous fortunes were on the track, seeking the potential in a country that had been ruled by communists, but brutally got the taste of market economy. From being a country in chaos and with strong mafia dominance, Russia today stands as a good country for swine producers. For pork, people almost pay twice in comparison to surrounding countries. Due to former prime minister and current president Putin, the Russian agriculture is aiming at to be self-sufficient in agricultural products. Russia has introduced a quota system and tax collector that protects against imports.

Many western actors have tried to establish industries in Russia over these last 20 years. Almost as many have broken their necks or sought retreat with heavy losses. Some succeeded. Norwegian pork producer Knut Langeteig is one of them. In 1991, he started small in a small town in Norway.

Seeing new markets on the horizon, Langeteig understood the keys for success in Russian swine production: A good market, visible good margins and good management. In 2006, he therefore founded the Norwegian company Russian Baltic Pork Investment (RBPI) in Kaliningrad on the Baltic Sea.

Firstly 8,000 ha of land in Pravdinsk in the South of the exclave was purchased. After that, an infrastructure with roads, water and power supply were created. Everything was built by Russian craftsmen under Danish leadership. The experience of modern swine production was low in Kaliningrad. This created a possibility to implement a standardised management from the beginning. The key component tying all farm factors together is management.

The animals (Danish Large White x Landrace gilts and Duroc boars) were imported from Danish Specific Pathogen Free (SPF) herds. The swine production started with 3,100 sows and the first gilts were inseminated in 2008. The plan is to close the herd in the future with production of their own replacement gilts. At present 20% of the replacement gilts are three-bred crosses from the finishing stables.

Piglets are weaned at four to five weeks of age and moved to one of the 16 weaner units.

The pig farm layout is characterised by high biosecurity – and located in an area with no other pigs. The pig population in Kalingrad is very small. The farm is surrounded with high fences and guards around the clock. The structure is based on different separated sections for breeding and gestation, farrowing, weaning and slaughter pigs. A quarantine unit for replacement stock is well separated from the herd, with separate fence and bath with disinfectants for incoming vehicles.

The section for mating and gestation includes eleven units with 132 sow stalls in mating and gestation. There is a separate boar unit for AI collection and preservation, 322 inseminations are done weekly. The farrowing unit includes nine units with 132 farrowing crates with slatted flooring. Piglets are weaned at four to five weeks of age and moved to one of 16 weaner units (8 x 1,750 places, 8 x 500 places) comprising floor-heated, two-climate pens with partially slatted flooring. The finisher sections are 16 units in total with fully slatted pens. Each finisher unit has places for 1,500-1,750 pigs. The pigs are delivered to the slaughterhouse when they weigh 115-120 kg, by the farms own trucks. All pigs are slaughtered at local plants in Kaliningrad. There are different workers in the different sections. It is compulsory to have a shower before entering a section.

The Danish company Egebjerg delivered the technology for the pig unit. All feed for the pigs is made in the feed mill at the farm in close proximity to the stables. The storing capacity at the farm is 18,000 tonnes – the annual consumption is 32,000 tonnes. The feed is based on wheat, barley, oats and soybeans. Parts of the cereals are home-grown but the main amount is purchased from local farmers. Soybeans are produced in Kaliningrad and sold to the farm.

The results so far

Even though the herd is very young, with mainly first-parity sows, the results are very good,

During 2011, 32.3 piglets were weaned per sow per year. There was a low mortality and high growth rate among growers and slaughter pigs. Good management and quality genetics have proved to be very important ingredients for these results. These production results so far illustrate the herd’s future potential. 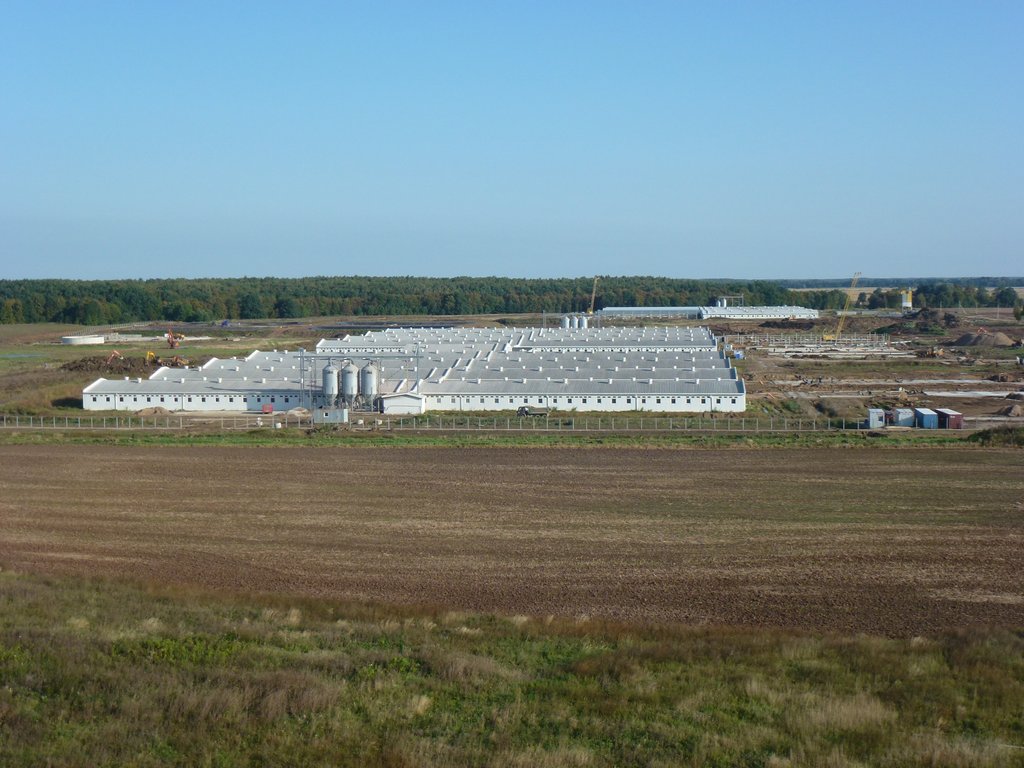 Many expensive lessons were learnt on the road, but it was considerably cheaper and easier to take step 2 (the expansion from 3,100 to 6,200 sows) than the first initial step. The investment company behind RBPI has now plans to build at least ten new farms in Russia copying this concept, similar to the worldwide Ikea idea.