Why relying on antibiotics alone is not enough

For decades, livestock production has relied on the usage of antibiotics in order to help their herds and flocks to overcome disease pressure. Evidence is growing that a resulting antimicrobial resistance has become a worldwide issue. What is needed? A deeper understanding of resistance as well as more attention to disease prevention.

Antibiotic resistance is no longer a topic that can be easily dismissed. After all, even the World Health Organisation (WHO) as well as the US president Barack Obama have emphasised the need to combat antimicrobial resistance on global level. Ask Dr Johanna Fink-Gremmels, professor of veterinary pharmacology, pharmacotherapy and clinical toxicology at Utrecht University, the Netherlands, and she explains very clearly the importance of the issue.

Onset and spread of antimicrobial resistance

Fink-Gremmels recently spoke at the international conference of the European Association for Veterinary Pharmacology and Toxicology, held in July, in Nantes, France. One of the major issues was the potential contribution of the use of antibiotics in animal husbandry to the global antimicrobial issue.

There is a general consensus among scientists that the direct transfer of resistant bacterial strains between animals and humans is limited, and this risk can even be reduced further by strict hygiene and control of the food production process. Fink-Gremmels says, “There is, however, also a general consensus that last resort antibiotics, which are of critical importance in human health care, should not be used for routine treatments in animals and if considered necessary in individual cases that this use should be governed by veterinary oversight and a full diagnostic work-up, including whenever possible a sensitivity testing of the targeted bacteria prior to use.”

Bacteria can develop defence mechanisms and hence resistance against all known antimicrobials. Fink-Gremmels says, “We need to realise that the giant numbers of bacteria in the intestinal tract can carry this information for antimicrobial resistance over many months and that animal excretions (manure) may transfer resistance genes also into the environment. It is good to see that awareness about these mechanisms is increasing around the world. It is increasingly more accepted that we need to implement clear rules and procedures to reduce the use of antibiotics in animal husbandry and to restrict their application to the diseased patient.”

A similar mechanism might contribute to the spread of resistance genes from animal operations into the environment. Reaching the environment, resistant bacteria can be found on plants and vegetables and can enter the food chain when no hygiene barriers are implemented.

The environmental persistence of genes encoding for antimicrobial resistance is most likely the reason for the global transmission of resistance factors. Fink-Gremmels explains, “Considering that globalisation in trade of food and feed materials is still increasing, it is of utmost importance that the knowledge about such mechanisms of spread of antimicrobial resistance is disseminated. Training and education of health professionals, veterinarians and farmers producing food for the global market has become more important than ever,” she concludes. As president of the European Association for Veterinary Pharmacology and Toxicology, Fink-Gremmels feels that this is a responsibility for her colleagues. “We need to allocate time to this task and as a European association support training programmes for our colleagues in countries which are recognised as emerging economies and in which in the last ten years animal husbandry and the production of meat, milk and eggs is rapidly increasing.” She just mentioned a few countries where she had been recently for teaching commitments, including China, Vietnam, the Philippines and the Persian Gulf region. Even more importantly, Utrecht as well as Wageningen University accept an increasing number of foreign PhD students, as part of their educational mandate.

Meanwhile, the interest for antibiotics is reducing. In several areas of the world, usage of antibiotic growth promoters (AGPs) has been banned (EU) or under pressure (US). In addition, various major retailers (such as e.g. Tyson Foods or McDonalds) demand meat that has been produced without the use of antibiotics that are essential in human health care. Last but not least, in several European countries further usage of therapeutic antibiotics is even discouraged.

“It is a change in mindset that is gradually taking place,” Fink-Gremmels states. At the same time she emphasises that modern antibiotics should remain available also for animals. “As veterinarians we are responsible for animal welfare and it remains our responsibility to treat the diseased animal with the most effective antibiotic, to avoid pain and distress from infections. The selection of an optimal antibiotic therapy needs to be based on a qualified diagnosis and long-term treatments with antibiotics that rapidly induce resistance should be avoided.”

Selection of the most optimal dosing regimen that guarantees a rapid therapeutic response and reduces the risk of the emergence of resistance remains a scientific challenge. In the development of recent antibiotics, all these different factors have to be and have been considered.

She indicates, “We call this a PD (pharmacodynamics data)/PK (pharmacokinetic data) approach”, as this assessment considers equally the effect of an antibiotic on the bacterial target population (the pathogenic agent) as well as the fate of the antibiotic in the animal’s body, particularly the fraction of the dose that reached the site of infection.

Fink-Gremmels continues, “Take for example a pig with a respiratory infection. We need to treat the animals quickly to avoid the spread of disease over the entire unit and the selected antibiotic needs to be effective (PD) against different classes of pathogens (such as for example mycoplasma, pasteurella, haemophilus species) and it needs to reach the inflamed lung tissue in a sufficient concentration (PK). Over the recent years, the bacteria sensitivity has changed, and extensive surveys are still needed to quantify these changes as part of the pharmacodynamic data assessment. Fink-Gremmels says, “This applies particularly to older antibiotics having a marketing authorisation for many years already, such as various penicillins, sulphonamides and tetracyclines. Their dosing regimens are awaiting a re-assessment, based on actual epidemiological data that describe the current sensitivity (cut-off) of major pathogens to different classes of antibiotics.”

Recently, increasing attention has been given to gut health considering that major parts of the immune system and hence the innate immunity and resistance to infectious disease are associated with the intestinal tract and its microbial population. Advanced feeding strategies (pre-fermentation) and the use of pre- and probiotics and other feed additives can optimise nutrient utilisation, while creating at the same time an optimal intestinal environment (microbiota). This is of particular importance in the initial phase of life (the piglet) and associated with the maturation of the immune system and in turn the future disease resistance of the animal.

Health care needs to start at day one of life or even earlier and by professionalising our care for the animal the need to cure diseases decreases automatically. This is perhaps the most elegant strategy to avoid antibiotic dependency and to reduce the use an antibiotics in pigs.

German by birth, Prof Johanna Fink-Gremmels (66) qualified as DVM, attending the University of Veterinary Medicine (TiHo) in Hanover, Germany. She is professor of veterinary pharmacology, pharmacotherapy and clinical toxicology at Utrecht University and has been attached to the university since 1991. Prior to this, she was senior scientist and research director at the federal institue for Meat Research in Kulmbach, Germany. Prof Fink-Gremmels is also president of the European Association for Veterinary Pharmacology and Toxicology. 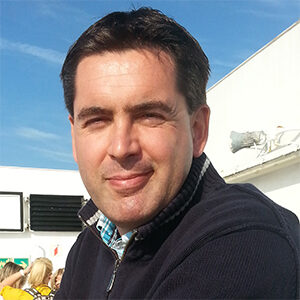