Popcorn for piglets – how to enhance digestibility?

At weaning, the young piglet’s gastrointestinal tract is not completely mature yet. That is why weaner feed is expensive – a lot of attention is paid to making feed ingredients as tasty and digestible as they can be. Puffing – a process essentially identical to making popcorn – is a sophisticated method to achieve just that.

Piglets are exposed to a radical change of feed at weaning. They must switch from their mother’s milk, which is liquid, easily assimilated and naturally rich in proteins and soluble sugar (lactose), to a solid feed, rich in cereals and which requires a whole new enzymatic machinery to break down these new proteins and starch to obtain the energy necessary for growth.

Figure 1 shows the evolution of the main intestinal enzyme activities during the first weeks of the piglet. It is well known that starch and crude fat are the main energy sources for pigs. Just as uncooked cereals are not ideal for human babies, piglets also need pre-gelatinised cereals because of their underdeveloped digestive system. Provided they are given good nutrition and care, the morphological adaptations and digestive capacity of suckling piglets go through substantial changes with their increase in age. However, despite those increases of digestive enzymes, the suckling pig has only reached two-thirds of its mature digestive capacity at 3 to 4 weeks of age (when conventional weaning usually takes place). In short, they need extra support to stimulate the maturation of their digestive system.

Figure 1 – Evolution of the main intestinal enzyme activities during the first weeks of a piglet’s life. 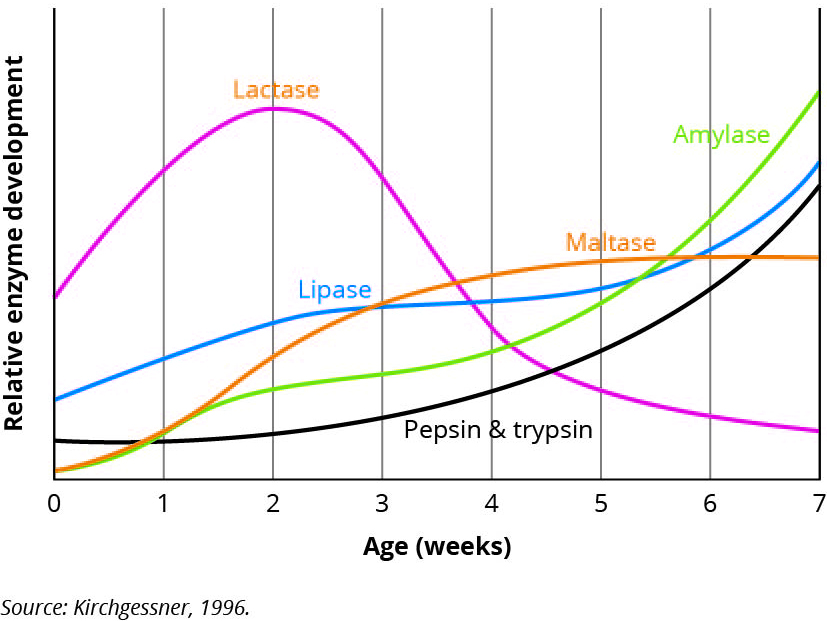 Keeping piglets eating during weaning is crucial for their future growth and weight gain. With the sudden change of diet, piglets may refuse to eat solid feed and develop anorexia, further resulting in atrophy of intestinal cells. Therefore, pre-conditioning piglets with solid feed rich in cereals is an important step to teach them how to eat solids after weaning. Normal practice on a farm is to provide pre-gelatinised creep feed.

Investing in the feeding of young animals is extremely important as it impacts their performance later on in life. This special will bring you the latest insights and developments regarding young animal nutrition. Find out more…

What does gelatinisation mean?

In feed production, gelatinisation of starch sources is a processing step that can help in this context. Gelatinisation exposes starch sources to heat and water to break down their molecules, with the result of increasing the starch’s digestibility. There are various different methods. One of the more expensive methods is puffing – or pressure cooking. This procedure is widely used for creating human nutrition – one only has to think of popcorn – but there are not many places in the world where the sophisticated technology is used for animal nutrition.

In short: the pressure-cooking process starts with a whole grain (corn, but also wheat, barley, rice, etc.) and from that produces a good quality, digestible and palatable ingredient. Figure 3 shows an illustration of the pressure-cooking process, based on a combination of pressure, steam and time. Clean grains go to the puffer at high pressure (20–25 bar) and with overheated steam (from 250–300°C). The grains stay there for a few seconds, then the pressure is reduced abruptly. The grains are then shot to the tunnel and will subsequently pop. That is because the water in the starch granules evaporates, resulting in the granules swelling instantly. It is known that 1 mol of water in liquid form occupies much less space than steam. When the steam evaporates, it digs holes in starch granules, thus the crystalline structure is completely broken down like popcorn (starch gelatinisation). Then the puffed grains are cooled instantly.

Figure 3 – Scheme of the pressure cooking process used in Weert, the Netherlands. 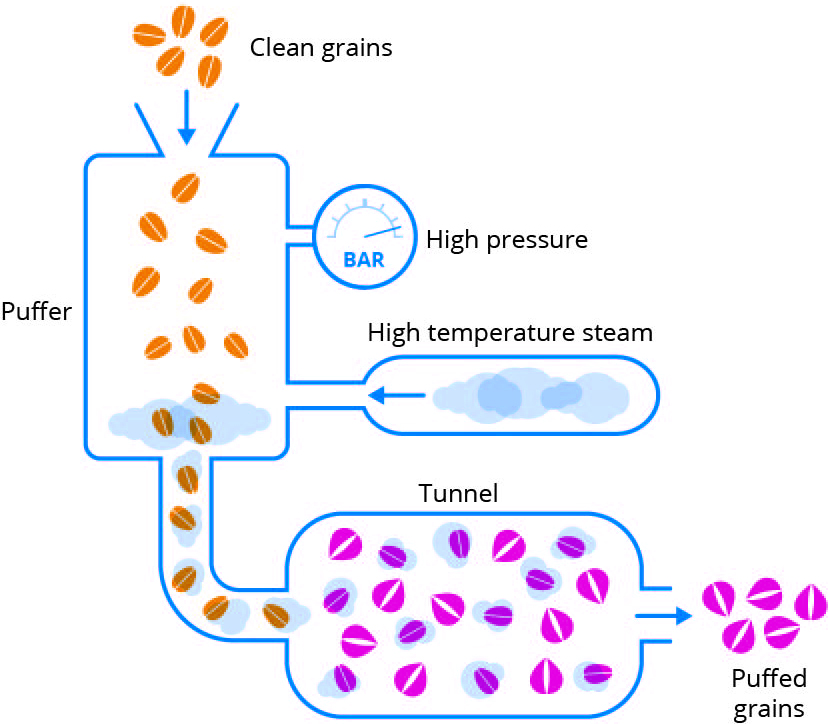 Because they provide energy and better palatability to piglet formulations, the pressure-cooked ingredients are today widely used in piglet feeding. Added to solid feed by up to 30% in the early life stage, they ensure best growth at a high health level.

In addition to the very common use in piglets, there are new and future opportunities – research continues into additional benefits of the pressure-cooking approach, with a focus on fermentable fibre or the potential to use pressure-cooked ingredients as a functional carrier to fix high fatty substances.

The above process is day-to-day business at Limagrain Ingredients in Weert, in the south of the Netherlands, where a pressure-cooking facility prepares grains for animal nutrition. In collaboration with Schothorst Feed Research in the Netherlands, the company conducted comparative in vitro tests to assess ileal digestibility of organic matter and starch, to compare four processing technologies of wheat grain (micronisation, steam flaking, expansion and pressure cooking) (see also Figure 2). The study showed that pressure-cooked (“Presco”) gelatinised wheat had the highest ileal digestibility of both organic matter and starch.

Figure 2 – Ileal in vitro digestibility of organic matter and starch of wheat in relation to gelatinisation technique.

In addition to that in vitro test, in 2016, an in vivo trial was also performed with 196 piglets. The results showed that piglets found gelatinised corn using the pressure-cooking method to be more palatable for both pre-starter as well as starter diets. They ate significantly more feed with pressure-cooked gelatinised corn than with another heat-treated corn in the market. Thus, they also gained more weight by the end of this trial.

The latest piece of scientific proof was gathered only last year. In 2020, a cooperative study by Limagrain and the University of Clermont-Ferrand, France, used the university’s in vitro system (a so-called TIM model) to simulate the digestion of starch in weaned piglets. The results obtained with barley grain during six-hour digestion showed that pressure-cooked barley leads to the highest starch digestibility (70%), followed by extruded barley (64%) and expanded barley (60%).