Piglets in the era without zinc oxide

Many solutions have existed to avoid the occurrence of post-weaning diarrhoea, but one by one they are disappearing from the veterinarian’s toolbox, think of antibiotics or zinc oxide. Time to think of new solutions for an old problem.

Post-weaning diarrhoea (PWD) is a highly prevalent enteric disease, affecting piglets during the first two weeks after weaning. The disease is characterised by diarrhoea, dehydration and low performance. Mortality may reach up to 30%, thus representing an economically significant disease. PWD is a multifactorial disease and several factors influence its occurrence during this critical period. These factors can be grouped into three categories: predisposing, contributing and determining factors.

The stress associated with the weaning period is known to increase the piglet’s susceptibility to PWD. The first week after weaning is characterised by a low feed intake, which is highly correlated with an increased risk of disease. Moreover, a reduced feed intake is associated with low performance and increased intestinal inflammation, reflected by poor villus and crypt development.

Intestinal inflammation creates an ideal environment for the proliferation of bacteria, including E. coli and the production of toxins, which may reach sub-epithelial tissues due to the increased intestinal permeability and the consequent ‘leaky gut’ syndrome.

In addition, the intestinal barrier and the immune system of piglets of this age is not fully developed. Also, the intake of immunoglobulin A (IgA), the antibody playing a critical role in mucosal immunity from sow milk is interrupted at weaning, contributing to the increased susceptibility to infections.

Environmental conditions, including sub-optimal temperature, high animal density and a poor feeding programme are well-known contributing factors for PWD. Furthermore, mixing piglets from different origin increases the variation of their immune status and increases the incidence of aggressive behaviour, which may influence the piglet’s susceptibility to diseases. Additionally, co-existing infections, (e.g. viral infections) have been reported as contributing factors, increasing the susceptibility to PWD.

Enterotoxigenic Escherichia coli (ETEC) has been identified as the most common cause of PWD. Enterotoxins and adhesins are produced by these bacteria and are indispensable for the disease development. ETEC adhere to the small intestine epithelium and the enterotoxins increase water and electrolyte secretion into the lumen, causing dehydration and diarrhoea due to the impairment of the enterocytes and malabsorption.

Figure 1 – Effect of IQs supplementation on stress due to weaning.

Several in-feed alternative strategies have been used to prevent PWD, including the use of minerals, pre- and pro-biotics, organic acids and phytogenics. Zinc oxide (ZnO) at levels of 2,500-3,000 mg/kg of feed has been used since early 1990s to decrease the incidence of diarrhoea and improve growth performance in post-weaning pigs, probably due to its effects on the microbiome. However, its use at high levels has always been controversial and has led the European Commission to ban its use since June 2017 and to limit the total dietary zinc to a maximum of 150 mg/kg of complete feed in piglets (European Commission, 2017).

Zinc is a heavy metal which tends to accumulate and cause soil contamination. Furthermore, the bioavailability and absorption of zinc from zinc oxide are very limited, resulting in high levels of zinc being excreted to the environment, contaminating the groundwater and the whole water supply chain. Additionally, it has been reported that high levels of zinc oxide increase the proportion of multi-drug resistant E. coli and Salmonella in piglets, due to the co-selection of heavy-metal-tolerant and antimicrobial-resistant genes. Therefore, there is a need for an effective alternative to the high dosage of zinc oxide for the control of PWD in piglets. 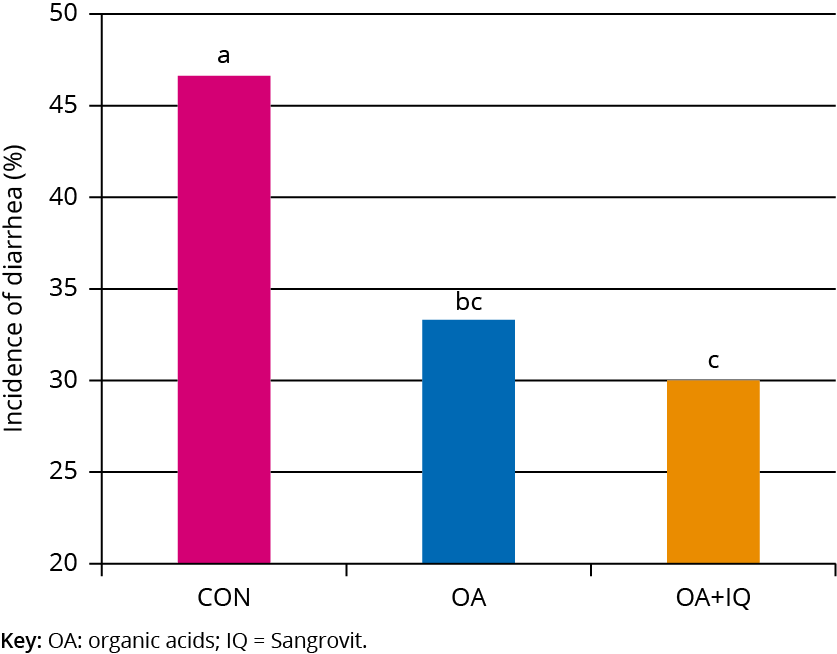 Isoquinoline alkaloids (IQs) are very well-known local anti-inflammatory compounds. They are available as a standardised blend in a commercial feed additive (Sangrovit, Phytobiotics). The use of IQs has shown to down-regulate stress response due to transportation in finishing pigs as well as to enhance the intestinal barrier function, limiting the entrance of pathogens to sub-epithelial tissues and enhancing nutrient digestibility and absorption. Moreover, stress reduction was correlated with a lower pathogen shedding. Additionally, IQs supplementation has shown to decrease stress response at farrowing, resulting in a better sow and piglet performance and overall health.

In piglets, IQs improved the integrity and the resistance of the intestinal barrier. Additionally, adding IQs to an organic acid blend significantly decreased stress response after weaning (see Figure 1). Furthermore, IQs decreased the incidence of diarrhoea as compared to non-supplemented piglets and organic acids (see Figure 2).

In conclusion, these data strongly support the use of IQs in post-weaning pigs to promote gut health and reduce the incidence of PWD.