Keep pigs agile to manage the cost-effectiveness of feed

Being able to manage all the risks impacting cost-effectiveness of diets is the holy grail of nutrition. But where best to start – controlling all the risks in the diet or enabling the animal to respond in an effective way to potential risks? Combining inspiration from the industry 4.0 movement with learnings from genetics, paves the way to new approaches in pig nutrition.

Feed is a major production cost and there are 2 ways to approach it:

The latter is much easier said than done and despite animal nutrition becoming increasingly more sophisticated, we are likely to still be far from maximising the return on investment of feed. This is because there are still difficult to control or unknown factors present in feed that can affect performance.

There is also a lack of a full understanding of how pigs respond to and process the many influences of feed and how this can be influenced positively to maximise returns. Feeding for gut agility is the beginning of a new perspective on pig nutrition. It starts with how we can support the animal to self-regulate or self-optimise its response to nutritional challenges in favour of performance efficiency.

Industry 4.0 is an initiative that started in Germany and is influencing new manufacturing technology initiatives in other countries for more intelligent and flexible production. It is often claimed to be the fourth industrial revolution and is mainly driven by digitisation, which is improving manufacturing responsiveness, quality and efficiency. Now, machines are not only controlled by human operators – they talk among themselves, too.

The term ‘Industry 4.0’ refers to the combination of several major innovations in digital technology. These technologies include advanced robotics and artificial intelligence; sophisticated sensors; cloud computing; the Internet of Things; data capture and analytics; digital fabrication (including 3D printing); smartphones and other mobile devices; platforms that use algorithms to direct motor vehicles (including navigation tools, ride-sharing apps, delivery and ride services, and autonomous vehicles); and the embedding of all these elements in an interoperable global value chain, shared by many companies from many countries.

One major outcome to expect from Industry 4.0 is that production, supply chains and even products themselves will become a lot more responsive and interactive, allowing them to quickly adapt to changes in the environment and individual demands of customers. Products can also track their own functioning or how they are used and react accordingly. For example, the equipment used on a construction site can now detect an impending mechanical breakdown and prevent it. The next generation of this equipment will be able to compare the efficiency of various machines and suggest more efficient deployment.

The inspiration from this for pig nutrition is, to think about how can we manage nutrition cost-effectively such that pigs can self-optimise their responses for greater efficiency in performance, even in the event of nutritional stressors in the diet.

There is scientific evidence suggesting that for genetic selection, improving the ability of pigs to cope with stressors, may be a better way of improving pig performance than selecting only for increased growth potential. That means the pig needs to be able to adapt faster and more adequately to dietary changes and stress factors for efficient growth performance.

Another term to describe the capability of being able to adapt to changes efficiently is agility. So, in other words this research is saying that pigs need to become more agile to consistently meet performance potential efficiently. Genetic selection is certainly going to play an important role for advancement in this capability of the pig.

The gut is particularly responsive to stressors, hence why the emphasis is on the gut when improving the pig’s adaptive response. Gut agility is a new term coined to describe the pig’s ability to adapt to nutritional stressors in a faster and more energy efficient response than it normally would.

Agile nutritional concepts are designed to boost gut agility and empower animals to adapt to a variety of nutritional stress factors, including mycotoxins, making them more robust and energy efficient. The animal becomes more robust in the face of dietary challenges, resulting in more consistent high performance and well-being. This again will contribute to consistency in the cost-effectiveness of diets under commercial conditions.

Nutritional stressors, such as feed transitions, reactive oxygen species and endotoxins in the feed, less digestible nutrients and anti-nutrients can all cause stress reactions such as oxidative stress, reduced gut integrity, inflammatory responses, shifts in gut microflora and reduced appetite in pigs. This not only reduces growth performance, but also feed efficiency and thus the cost-effectiveness of diets. Feed efficiency is reduced due to energy wasted on stress reactions instead of being used for productive purposes. For instance, under oxidative stress and inflammation, 30% of the performance drop is explained by the catabolism and feed conversion needed to manage inflammation.

Increases in intestinal permeability raises the possibility of translocation of bacteria and/or their toxins across the more permeable gut barrier. The resulting endotoxemia can trigger disease onset and progression. The increase in translocation of endotoxins across the intestinal barrier can also stimulate immune cells to secrete pro-inflammatory cytokines and prostaglandins like PGE2, resulting in low-grade inflammation, which again can waste metabolic energy.

Agile nutrition concepts rely on bioactive substances derived from plants that reduce those type of negative stress reactions, seen in response to nutritional stressors for more energy efficient responses in the pig.

It is well known that mycotoxins in the diet can have a negative impact on pig performance. Table 1 highlights the results from a meta-analysis study on 85 pig trials reporting the effects of different types of mycotoxins on pig performance in weaner and grow-finishing pigs. For each additional 1 ppm (1 mg/kg) of aflatoxin in the diet, there was a reduction of 3.9% in pig weight gain. Similarly, there was a reduction of 0.28% in the weight gain for each ppm of deoxynivalenol (DON) and 0.17% for each ppm of fumonisins in the diets. In general, the reduction in the growth rate in challenged animals was explained by the combined effects of reduction in feed consumption and in the efficiency of protein deposition. The greater part of variation in weight gain was explained by the variation in feed intake.

Recent research has shown that DON reduces feed intake in mice by significantly increasing the release of the gut peptide CCK (cholecystokinin). CCK is a key component in appetite control. Binding of CCK to specific receptors triggers messages to the brain and gut to promote the feeling of satiety. Certain phytogenic substances can act as an antagonist to CCK and dilute the negative effect of DON on feed intake. Feeding those types of substances can therefore help to reduce the negative impact of DON on feed intake in pigs.

Mycotoxins can have a huge effect on the health and productivity of livestock – check out this informative feature.

A second meta-analysis study carried out in pigs concentrating on the differences in response to a single mycotoxin and multiple mycotoxins in the feed, revealed that the same mycotoxin concentration showed a much stronger negative effect on pig growth performance when present in combination with other mycotoxins than in a single contamination.

What was also notable was that irrespective of the type of mycotoxin contamination (single or multiple) the proportion of reduction in growth performance in response to mycotoxins due to increased maintenance energy was between 6% and 7%, also see Figure 2. 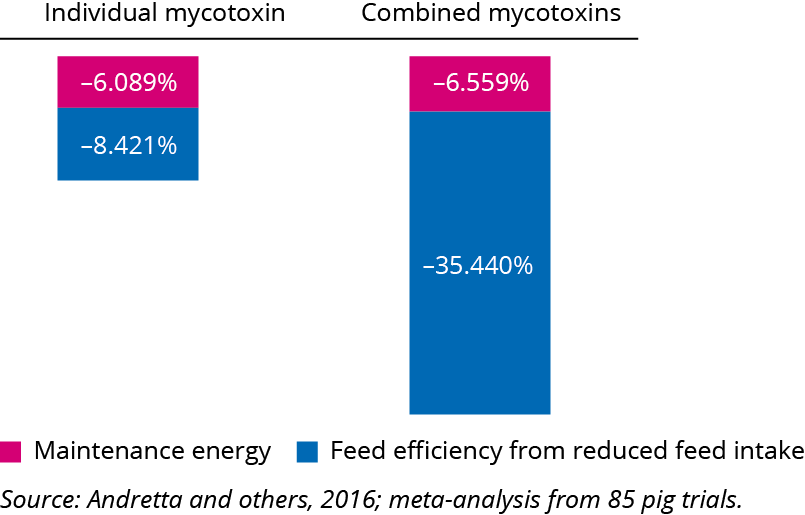 Direct disturbance in the functions of some organs, especially the liver, and the partition of nutrients for activities other than body growth also increase a mycotoxin challenged pig’s demands for protein and energy. Those activities include stress reactions similar to those seen in response to other types of nutritional stressors mentioned earlier in the text.

It follows that agile nutrition concepts developed to reduce stress reactions in pigs and for more energy efficient responses to nutritional stressors are therefore also an effective means in managing the response to a broad spectrum of mycotoxins for cost-effective pig nutrition in the face of nutritional challenges for the pig.

In conclusion, digitisation inspires new thinking, transforms the way we do things, promotes collaboration and most of all increases the efficiency and sustainability we can achieve in agricultural production systems. These are exciting times, with Industry 4.0 only just starting to creep into agricultural production systems, it no doubt will trigger further innovations, new concepts and processes also for pig nutrition and production in years to come.

The future is now: functional nutrition for pigs