Helping the liver to detoxify mycotoxins

Mycotoxin strategies have so far focused on binding compounds or detoxifying the compounds by feed additives. Animals however, can also detoxify mycotoxins themselves to a certain extent, mainly in the liver. Is it possible to help them?

Mycotoxins are small, but very dangerous. Above a defined contamination threshold level, which differs based on the type of mycotoxin, animal species, age and production stage, these toxins have the potential to impair animal performance, expressing their toxicity through alterations in organs like the kidneys, liver and gut. Decontamination solutions, widely available on the market today, are mainly based on their ability to bind mycotoxins. But is it enough to merely rely on a binding strategy? Indeed it is believed that most mycotoxins are non-polar or partially non-polar, meaning that they cannot be bound in the gut and pass through the intestinal barrier. This necessitates a strategy of detoxification.

Figure 1 – The fate of mycotoxins. 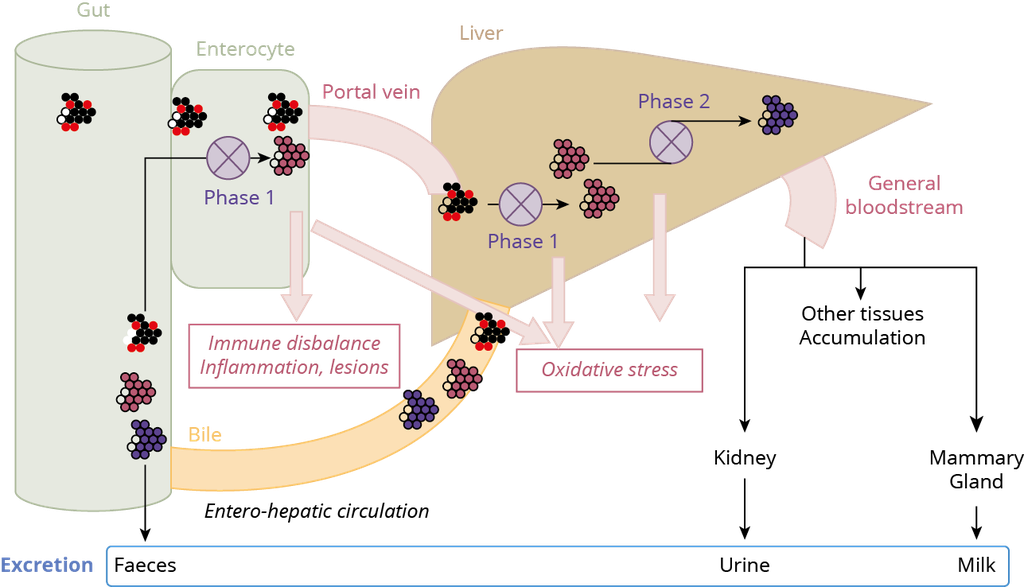 The fate of each mycotoxin is different, and we know that there are more than 1,000 different types of mycotoxins, which can act synergistically to impair the performance of livestock animals. Therefore, an approach that promotes the animal’s own detoxification system to cover a wide spectrum of mycotoxins should be favoured, instead of a strategy that focuses on each individual mycotoxin. 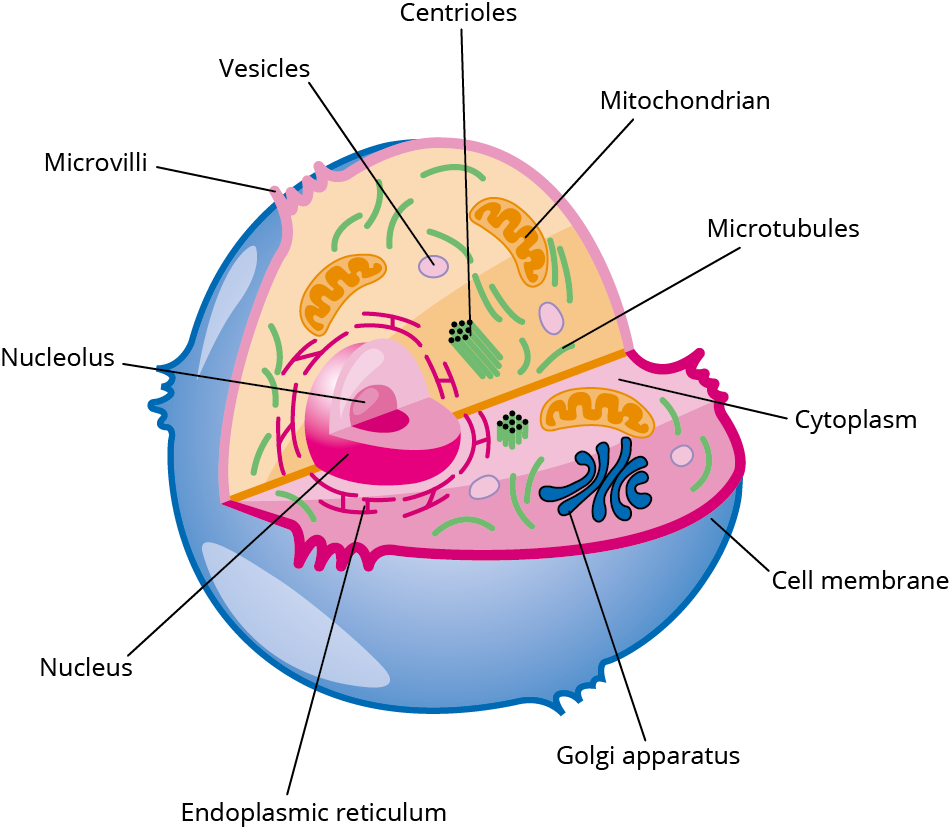 Not all the animals are equally well-equipped with the necessary enzymes in the intestinal mucosa to detoxify mycotoxins. Moreover, not all animals have the appropriate metabolic enzymes in the liver, which is one of the main sites of mycotoxin detoxification. Therefore, the excretion of mycotoxins, treated as xenobiotics by the organism, follow different elimination routes, via the faeces, bile (and then faeces again), milk and/or through urine.

The liver is the main site of detoxification for xenobiotics, including mycotoxins. Before reaching any tissue through the general bloodstream, mycotoxins are detoxified in 2 steps.

In phase I, called the oxidative, reduction and hydrolysis phase, mycotoxins are first transformed into a chemical form that can be metabolised by phase II enzymes. The major actors in phase I reactions are the cytochrome P450 enzymes, which are located in the endoplasmic reticulum and mitochondria of cells. These enzymes mainly catalyse oxygenation reactions, as well as dealkylation and epoxide formation reactions.

In this first phase, the metabolism of xenobiotics is mainly performed by 3 families of cytochrome P450 enzymes:

Isoforms of these enzymes have been identified in humans, poultry, swine, ruminants, fish, and many more species. In addition, CYP 450 polymorphisms between species, and also between different breeds, can partly explain the different sensitivity levels of various animals to mycotoxins.

In the 2nd phase, the transformed mycotoxin or its metabolite is conjugated to water-soluble substances to increase its solubility. This is the conjugative step. Several types of reactions are possible in this phase, and result in the excretion of the metabolite via different routes. For example, depending on the species, the enzyme sulfotranferase catalyses the addition of a sulphate group to the mycotoxin deoxynivalenol (DON), UDP-glucuronosyltransferase glucuronidates T2 toxins, DON and zearalenone, whereas glutathione-S-transferase conjugates ochratoxins and DON with glutathione molecules. The increased solubility of the resulting metabolites facilitates their excretion by the liver.

The absorption levels of mycotoxins, the efficiency of their biotransformation, the type of metabolites formed, the excretion routes and host sensitivity, all depend on the types of mycotoxins, whether the animal has been exposed to mono- or multi-mycotoxin contaminated feed, the animal species, and the developmental stage of the animal.

The effects of this strategy were tested on DON in piglets and on zearalenone in sows.

A study was conducted in pigs to compare the effects of the core component of a comprehensive mycotoxin detoxification solution, My-T (Pancosma), on the major hepatic oxidative and conjugative enzymes. The animals were exposed to feed with or without 2,000 ppb of the mycotoxin, DON. A third group of animals was fed the DON contaminated diet supplemented with the detoxification solution.

After the treatment period, hepatic microsomes and cytosol fractions were prepared by differential centrifugation from the liver lobes. Total cytochrome P450 content was determined with a spectrophotometer. The following enzymes were identified using different methods:

The study showed that chronic oral administration of the mycotoxin DON decreased hepatic oxidative enzymes in piglets. The inclusion of the detoxification solution in mycotoxin-contaminated feed was able to correct these metabolic perturbations caused by exposure to DON. This beneficial effect was mainly measured in the total microsomal cytochrome P450 fraction.

By inducing the production of more total cytochrome P450 enzymes, the solution can increase the natural biotransformation of mycotoxins during the phase I reactions in the liver. These activities can, in turn, facilitate greater detoxification and excretion of mycotoxins.

In pigs, zearalenone (ZEA) is absorbed in the gut at a level of around 80%. The first detoxification step is carried out in the enterocytes and in liver cells, by the cytochrome P450 family of enzymes. These reactions result in the formation of the major metabolite α-zearanenol, and to a lesser extent, β-zearalenol. The second detoxification step, called conjugation, is catalysed by the enzyme, UDP glucuronosyltransferase.

ZEA and its metabolites target the reproductive system and oestrogen tissues. They are excreted mostly through the bile to be recycled via enterohepatic circulation (65%), and also through urine. This can explain the particularly high sensitivity of pigs to this type of mycotoxin.

ZEA and its metabolites are considered to be toxic for 2 main reasons.

• Firstly, it exerts oestrogenic activity. ZEA has a structure similar to 17-β estradiol, and therefore can bind to the oestrogen receptors, which has the potential to cause cancer. In sows, ingestion of ZEA-contaminated feed was shown to decrease the secretion of luteinising hormone and progesterone, induce vulvovaginitis, and increase the size of the ovaries and uterus. It may also lead to abortions, lower conception rates and reduced litter sizes. Moreover, the resulting progeny have a higher risk of developing swollen vulva and hyperoestrogenism.

• Secondly, ZEA and its metabolites exert genotoxic effects by producing DNA fragmentation and adducts through the formation of covalent bonds with DNA bases, impairing gene transcription.

Given the difficulty of degrading ZEA in feed constituents prior to including them in the diets of farm animals, the use of feed additives can be a tool to limit the negative effects of this mycotoxin in animals. Such a product should have two key properties: the ability to bind and efficiently trap ZEA, and the capacity to optimise the natural detoxification process and the anti-oxidant status of the animal. Extensive research enabled the development of a feed additive meeting both criteria: My-T Premium.

In sows, zealarenone and its metabolites target the reproductive system and oestrogen tissues. Photo: Henk Riswick

The effects of the strategy were then investigated in vivo on the reproductive tract of female pigs fed a ZEA-contaminated diet (0 vs 2,000 ppb ZEA). Each treatment group consisted of 6 piglets with a mean initial body weight of 10.8 kg.

The results showed that ZEA did not affect piglet performance, but increased the vulvar volume from day 6 until day 21, and enhanced the length and the relative weight of the reproductive tract of the animals at the end of the trial. 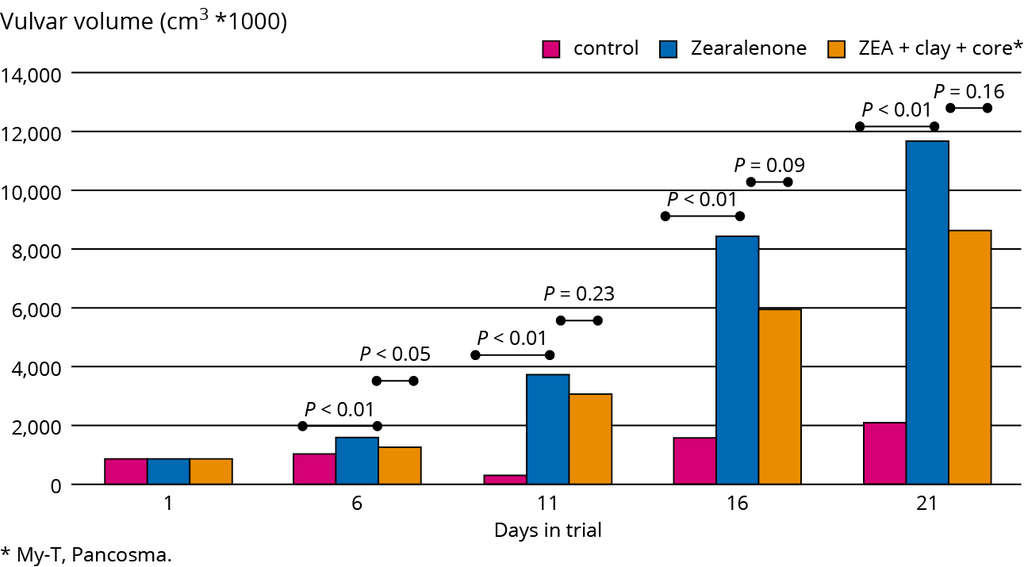 The addition of the My-T Premium, which is a consists of a specific clay and a detoxification solution, limited the negative effects of ZEA on the reproductive tract of the sows, by reducing the vulvar volume as soon as day 6, and by significantly decreasing the length and relative weight of the reproductive tract by day 21 of the trial.

Figure 5 – Clay + core* limits the negative impact of ZEA on the reproductive tract (in vivo model). 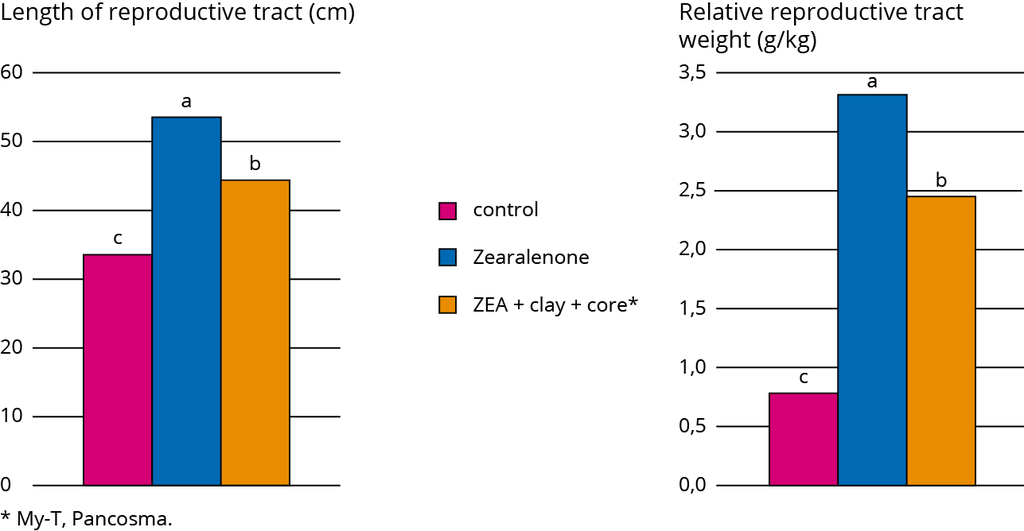 These results confirm that dietary supplementation with a feed additive combining specific binding and detoxification properties, has the potential to counteract the negative effects of ZEA-contaminated feed in female pigs.