Phytate is not the only element that has anti-nutritive effects in pig nutrition. When the product is gradually broken down into smaller compounds, these may also affect a pig’s health. A thorough approach is what is needed.

The costs associated with the anti-nutritional impact of phytate on nutrient and energy utilisation, leading to reduced growth performance and feed efficiency, have been estimated to be as high as $ 2 billion each year. Prevalent in many of the feedstuffs used to produce pig diets, phytate is increasingly recognised as a performance inhibitor that needs to be eliminated, rather than simply as a source of phosphorus (P) that can deliver feed cost savings through the use of phytase enzymes.

Phytate (IP6) exerts significant anti-nutritional effects by binding with and making unavailable key nutrients that are important for growth, including Ca, Zn, Fe and other trace minerals and amino acids. Dietary phytate can increase maintenance costs and reduce energy utilisation for growth. The combination of the anti-nutrient effects associated with phytate reduces animal performance. So targeting near-complete dietary phytate destruction would be advantageous to improving gain and feed efficacy, thus lowering the cost of production.

When phytase was originally introduced to the global feed industry, the focus was on reducing added mineral phosphate levels in the diets, saving both money and reducing pollution. Standard doses of phytase, traditionally targeted at releasing an extra 1 kg of available phosphorus (avP) per tonne of feed, results in the release of approximately 40-45% of the phosphorus bound to the phytate (IP6) molecule. Empirically, this has been found to result in the accumulation of lower phytate esters, primarily a mixture of IP4 and IP3, in the animal gut. The key point is that standard phytase dosing may be degrading one anti-nutrient and simply replacing it with another. 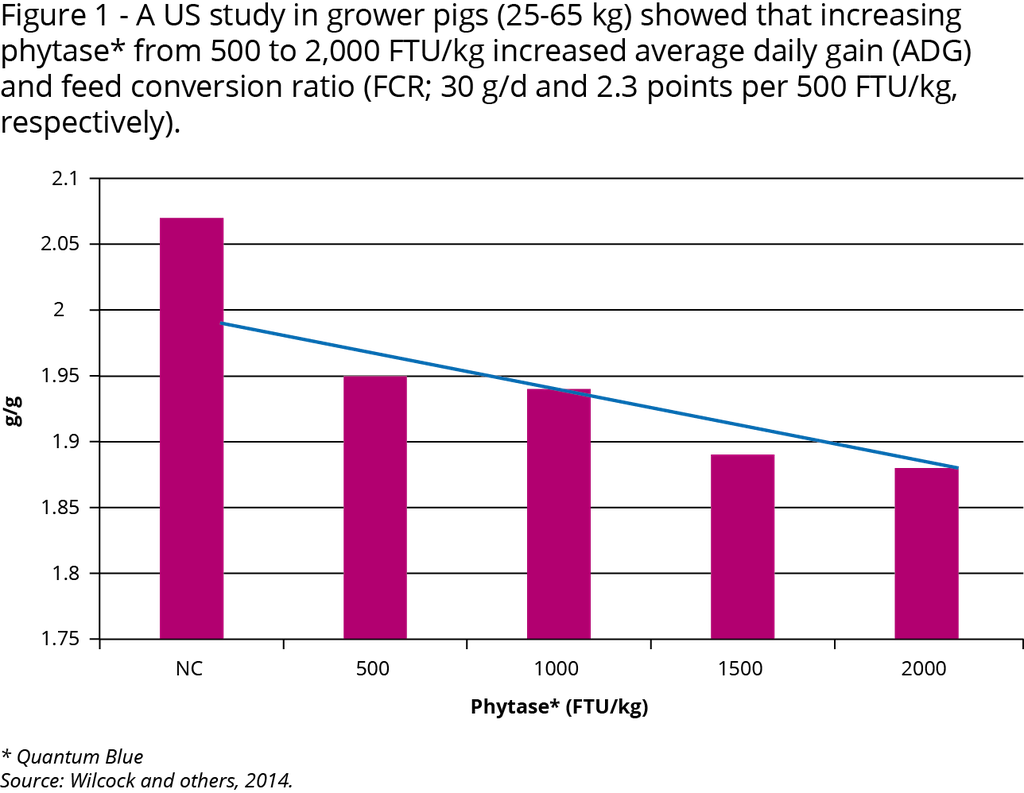 So targeting the rapid destruction of IP6 to IP2 with a minimal accumulation of lower phytate esters could further improve animal performance. This may be achieved by selecting the phytase with the optimal characteristics for IP6, IP5, IP4 and IP3 breakdown, and using this phytase at superdose levels – typically three to four times the standard dose. A recent US study in grower pigs showed that increasing phytase from 500 to 2,000 FTU/kg improved average daily gain (ADG) and feed conversion ratio (FCR). 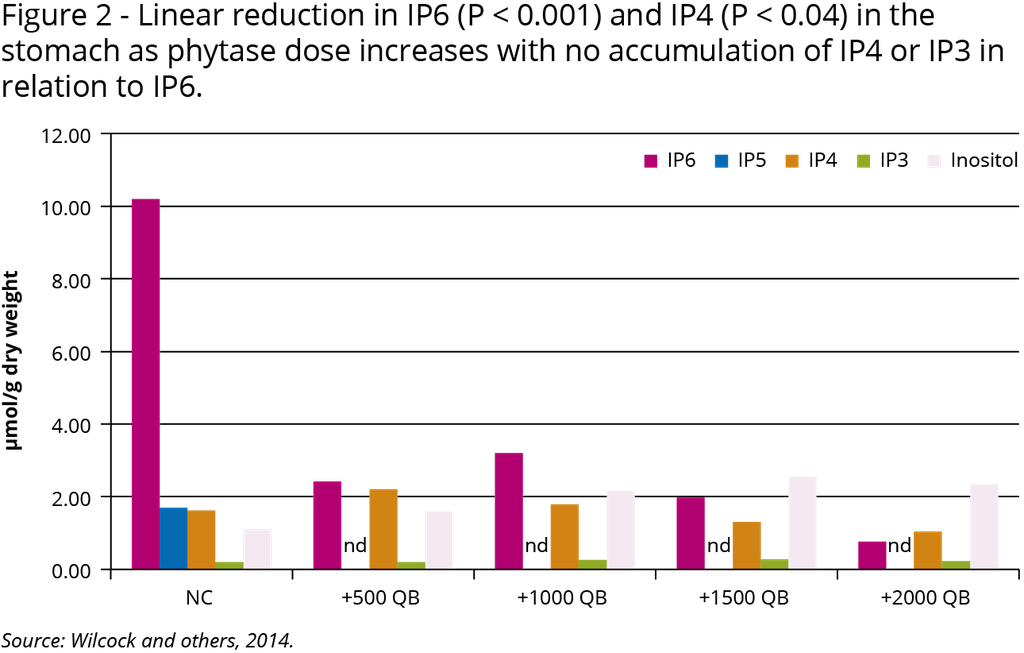 The positive response to superdosing levels of phytase seen here can be associated with the phytase breaking down IP6, IP5, IP4 and IP3 so as to eliminate their anti-nutrient effects. Figure 2, from the same study, shows that, as phytase levels increased above the standard level (500 FTU), the initial increment in IP4 and IP3 concentrations were held in check and reversed to NC levels.

In this regard, superdosing can be seen as using enough phytase to prevent the build-up of IP3 and IP4 within the animal.

When thinking about phytases, they should be considered as enzymes used to effectively breakdown IP5, IP4 and IP3, as well as IP6. Phytases should not only release P, but also eliminate all inhibitors of digestion and enable the animal to grow more efficiently. Superdosing phytase does exactly that.

This also sheds light on why there are differences between commercial phytases when they are employed for superdosing. To date, the focus in phytase comparisons has been on their ability to degrade IP6. There are clearly differences between phytases in this respect, but the fact is that each phytase ‘sees’ IP5, IP4, IP3 and IP2 as a totally new substrate.

Phytases also differ in their ability to attack these lower esters and this is cannot be predicted from their activity on IP6. For animal producers to see a greater return from their phytase programme, they need to select an effective phytase that, when applied at superdosed levels, can break down IP6 and continue to destroy the anti-nutritive lower phytate esters, even at low concentrations of phytate.
Choosing a phytase simply by determining how much phosphorus it releases does not provide the full picture. Scientific data now enable a much better understanding of the precise effect that phytases have in the gut, thereby maximising the performance benefits that can be gained through effective superdosing.