Global overview of mycotoxin threats in 2015

Mycotoxins are present on every continent and in every feed commodity. Knowing where they are and at what frequency and level they occur helps us to anticipate possible threats. In 2015, deoxynivalenol was found to be the single most prevalent mycotoxin in all feeds worldwide.

The annual Biomin Mycotoxin Survey provides a good picture of the threats posed by mycotoxins to livestock worldwide. This is all the more important for pigs, which are one of the most sensitive of all animals to the major mycotoxins.

The types, concentration levels and combinations of mycotoxins in the feed, along with animal age and health status, all influence the actual mycotoxin impact. Many mycotoxin combinations interact synergistically, amplifying their negative effects on swine health and performance.

Figure 1 – Prevalence of the major mycotoxins in feed commodities ­relevant to swine, as a percent of samples tested in the 2015 Biomin Mycotoxin Survey. Samples with a level detected above the health risk threshold for pigs are shaded in dark blue. 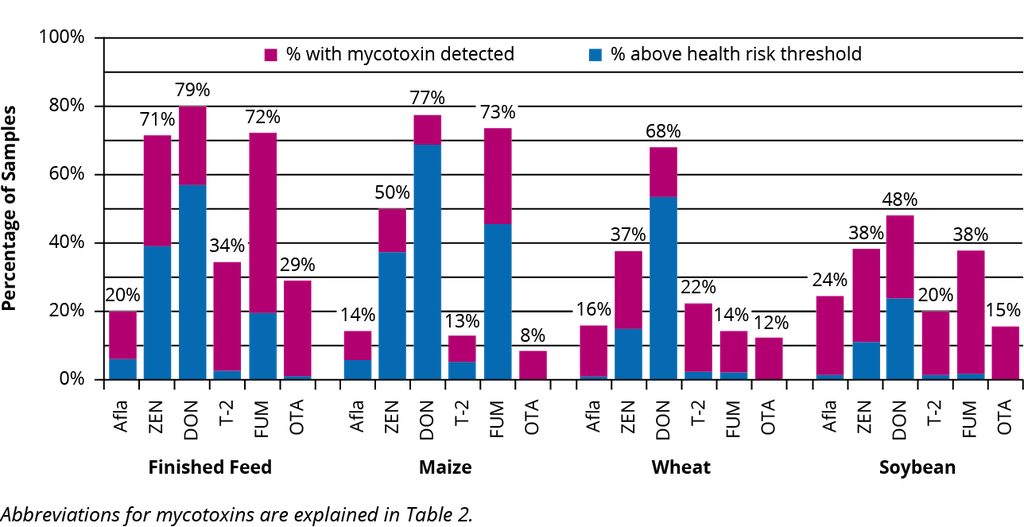 The 2015 survey covered 8,271 raw commodity and feed samples from 75 countries. Most samples of feed in the latest edition contained some of the major mycotoxins. Of all samples tested for the six major mycotoxins, 97% tested positive for at least one. Finished feed, corn (maize), wheat and soybean results are shown in Figure 1 and Table 1. Deoxynivalenol (DON) was the single most prevalent mycotoxin in all of the feeds shown, having been found in 79% of finished feed samples and 77% of all corn samples. Of those samples in which DON was detected, 71% of finished feed samples and 88% of corn samples had DON concentrations (measured in parts per billion or ppb) above a level known to impact on pig health and production.

Zearalenone (ZEN) also registered as highy prevalent. In finished feed and corn, the majority (53% and 73%, respectively) of samples exceeded the pig health risk threshold. Fumonisins (FUM) were present in almost three-quarters (72%) of corn samples and 61% of those affected samples were above the recommended threshold.

Some of the common symptoms of toxicity are outlined for the major mycotoxins in Table 2. In many cases, the effects of sub-acute toxicity are subtle, such as disease susceptibility, reduced weight gain and poor feed conversion. Because these are less obvious than some of the acute or clinical signs of toxicity, the drain on financial performance may go undiagnosed and disease prevalence can start to grow.

With both ZEN and FUM, there is a known synergistic effect when combined with DON, such that the effect of 2 mycotoxins in combination are worse than would be expected from the sum of each mycotoxin effect. DON and ZEN combine to reduce growth rates and suppress the immune system of pigs, and DON and FUM together increase the risk of immune suppression and impact on gut health. This can occur at low concentrations, even at levels below recognised thresholds. In the finished feed samples, 21% had co-contamination of DON and ZEN and 48% had co-contamination of DON and FUM.

Go beyond binders to combat mycotoxins

When people think of counteracting mycotoxins, they often think binders. Yet binders constitute just a small part of the toolbox for countering mycotoxins. Binders only effectively target adsorbable mycotoxins, such as aflatoxins and ergot alkaloids.

A scientific review of mycotoxin management highlights the fact that trichothecenes (e.g. DON, T-2 toxin), ZEN and FUM are known to be inefficiently held by binders in vivo (real animal conditions). A binder is still important and binder choice should be based on evidence of effectiveness and lack of impact on vitamins and other valuable nutrients. It is also important to move beyond binders to have multiple strategies against mycotoxins.

Use of feed additives to counter mycotoxins

The most scientifically advanced method to counter mycotoxins is biotransformation, implemented using innovative feed additive ingredients that target a specific mycotoxin type and renders it irreversibly non-toxic. As an example of the latest research achievements, a purified fumonisin esterase enzyme (Fumzyme) was developed that specifically and efficiently cleaves off the 2 tricarballylic acid side chains from the fumonisin molecule. This results in a compound that is non-toxic for the animal. A similar approach with the micro-organism BBSH targets the trichothecenes (including DON), also rendering them harmless.

What role can plant and seaweed play?

A third process used against mycotoxin effects, i.e. bioprotection, involves plant and seaweed extracts shown to support the immune system and liver, which often bear the brunt of the mycotoxin challenge.

As the latest survey results show, multiple mycotoxins often contaminate swine feed and some of them have known synergistic effects – so even low levels can reduce pig performance and affect pig health. This reality requires a multicomponent approach that comprises an effective binder, a combination of genuine biotransformation compounds and validated bioprotection in order to deliver absolute protection that protects both pigs and profits.