The addition of probiotic yeast appears to positively affect the piglet immune status, whether supplied in sow feed or in weaner piglet feed. Trials in different continents point in the same direction.

Probiotics are live non-pathogenic micro-organisms that are taken orally to aid in the maintenance and/or restoration of healthy gastro-intestinal microbiota. Saccharomyces cerevisiae var. boulardii CNCM I-1079 is a non-colonising, non-systemic probiotic yeast registered as a zootechnical feed additive for use in piglet and sow feed (Levucell SB, Lallemand Animal Nutrition, France). It was first isolated in 1923 from lychee fruit in Indonesia by French scientist Henry Boulard who noted that natives of the area used the skin of the fruit to treat symptoms of cholera.

A very active research has provided interesting data on several modes of action of the yeast strain. Some areas have been widely documented, like the regulation of the intestinal microbiota through mechanisms such as oxygen consumption, the adhesion of some important pathogen receptors, the production of specific proteases or the maintenance of a good intestinal structure and function. The immunoregulation properties of the boulardii strain have opened another very exciting area of research at the highest  scientific level. 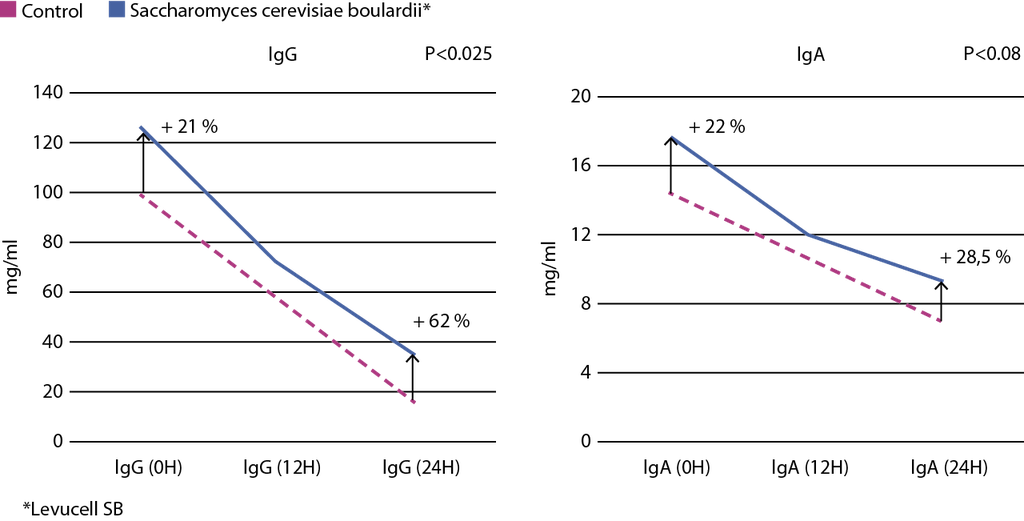 Challenges of the immune system in newborn piglets

Peri-partum nutrition is essential for immune development and survival of newborn piglets. The piglet is profoundly immunodeficient at birth, and is highly dependent upon a supply of both specific and non-specific immune factors present in maternal colostrum and milk for immune protection, development and survival. Immunoglobulin G is the most clinically important globulin during the first weeks of life and IgG from colostrum is absorbed over the gastro-intestinal tract during the first 24 to 48 hours post-partum.

Weaning pigs from the sow is one of the most stressful events in a pig’s life that can contribute to intestinal and immune system dysfunctions that result in reduced pig health, growth, and feed intake, particularly during the first week after weaning. Acquiring active immunity is a slow process, and pigs are weaned at a time when passive immunity is declining. The magnitude and severity of this weaning crisis at the gut mucosa is dependent on how much the immune system was expanded during the pre-weaning period.

Unfortunately, the point where the production system determines the weaning age, and when the immune system is ready for weaning do not coincide, so managing the immune system for optimal disease prevention will continue to be a challenge.

The sensitivity of the immune system to mycotoxin-induced immunosuppression arises from the vulnerability of the
continually proliferating and differentiating cells that participate in immune mediated activities and regulate the complex communication network between cellular and humoral components. Mycotoxin-induced immunosuppression may manifest as depressed T or B lymphocyte activity, suppressed antibody production and impaired macrophage/neutrophil effector functions. Suppressed immune function by mycotoxins may eventually decrease resistance to infectious diseases, reactivate chronic infection or reduce vaccine and therapeutic activity.

In an experiment performed at a commercial farm located in Brittany, France, 66 Large White x Landrace sows were blocked by parity and body condition three weeks before expected parturition. They were divided into a control group fed the regular feeding programme of the farm, and a group fed a diet with the yeast strain, fed 5 x 1010 CFU/day of S.c. boulardii CNCM I-1079, from the start of the trial to weaning. 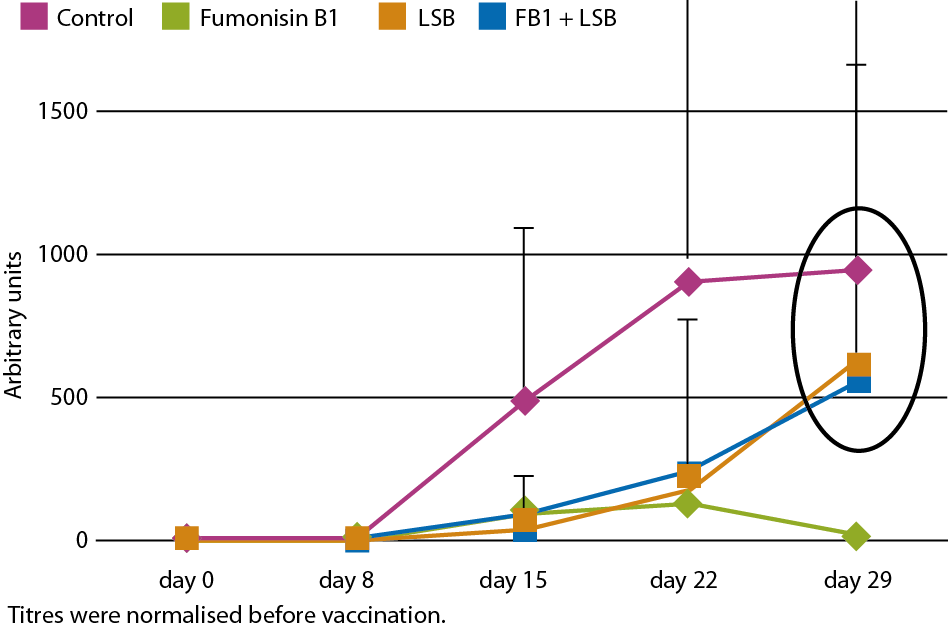 In another experiment, 30 newly weaned barrows were transferred to the Livestock Issues Research Unit of the United States Department of Agriculture (USDA) and divided into two treatment groups: with and without the in-feed inclusion of the yeast strain (2 x 106 CFU/gr. of feed). On day 16, all piglets were dosed via indwelling jugular catheters with lipopolysaccharides (LPS), which are molecules that usually elicit strong immune responses in animals.

In S.c. boulardii treated piglets, cumulative Average Daily Gain increased by 39.9% and lipopolysaccharides-induced piglet mortality was reduced 20% compared with control piglets. Concomitant with these attributes, the inclusion of the live yeast resulted in a unique immune/cortisol profile distinct from control animals. Cumulatively, the yeast strain supplementation resulted in differential cytokine production profiles from a larger pool of immune cells while in the presence of reduced cortisol concentrations prior and during the initial response to LPS challenge.

According to Collier, growth enhancement in weaned pigs may also occur via suppressing acute responses to pathogenic challenges and thus potentially preventing the diversion of energy away from maintaining innate and adaptive immune responses and liberating it for growth-related processes.

As part of this research field, Lallemand Animal Nutrition presented a study at the meeting of the Australian Pig Science Association (APSA) in 2015.

The study was done in co-operation with the French National Institute for Agricultural Research (INRA) ToxAlim, France, and University of Londrina, Brazil, and focused on the interaction between mycotoxin and yeast by examining in particular the vaccination response and small intestinal histomorphometry.

The experimental model used in the study confirmed previous findings indicating that dietary exposure to Fumonisin B1 (FB1) induces specific morphological changes, and demonstrated a negative effect on the specific antibody response.

FB1 piglets supplemented with the yeast strain reached (FB1 + LSB) a similar specific antibody titre than those supplemented but not under challenge (LSB) after 29 days, suggesting an inhibition of a deleterious effect from FB1 (Figure 2). Interestingly, the villous height was restored in both jejunum and ileum for FB1 supplemented with the probiotic (FB1 + LSB) compared with FB1 alone to become comparable to the control group.

The immune system is central to pig health and well-being. Under certain circumstances, like at birth, weaning time or under mycotoxin contamination, the immune system is unbalanced and so not fully protecting the piglets. The supplementation of Saccharomyces cerevisiae var. boulardii CNCM I-1079 in the feed could represent a very interesting tool to modulate the immune response, increasing the immunoglobulin concentration in colostrum when applied to the sows, or showing a different cytokines or antibodies profile when applied to piglets.
Source: Pig Progress magazine 32.2 (2016)