Porcine Circovirus 2 (PCV2) has proved to be a very variable virus, and various genotypes are known around the world, with different levels of prevalence. Ideal would be to have 1 vaccine that can protect against the majority of genotypes.

PCV2 is circulating on almost all swine farms worldwide. The variability of strains evolved over time. Based on sequence identity in ORF2, PCV2 can be divided into 4 different genotypes. These PCV2 genotypes have been designated consecutively based on the time of first identification with lower case letters (a, b, c, d). Furthermore, a 5th genotype (PCV2e) has recently been reported from the USA and China, however in a very low prevalence.

What was initially the most prevalent genotype, PCV2a, has gradually been replaced by the PCV2b genotype since 2005. This occurred in many countries worldwide and became the most commonly identified strain in pigs. Since 2010 new variants were described, like e.g. PCV2d (or mutant PCV2b due to close relationship to PCV2b type).

Since 2012, the PCV2d genotype has become predominant in North America, Asia and Europe, certainly in newly reported cases of PCVD. Some surveys, however, still do report the highest prevalence of PCV2a in randomly selected farms.

The clinical relevance of genotype specificity is a subject of controversy, all major types namely a, b and d are considered virulent and potentially responsible for clinical forms of PCVD. Nevertheless, the strains of PCV2d type are mostly identified from clinically problematic cases, including PCV2-systemic disease (or PCV2-SD) or Porcine Dermatitis and Necropathy Syndrome (PDNS). PCV2d together with PCV2b was also found in higher amounts in blood and tissues in sick animals than PCV2a.

In a recent survey conducted in 37 farms in France, 14 PCV2 strains belonged to genotype b and 18 to genotype d. The average clinical score was significantly higher when strain d was isolated: 7.8 (on a scale of 1-10), compared to 6.2 when genotype b was involved.

Figure 1- Relationship of the main PCV2 genotype based on ORF2 sequence comparison.

In a previously published study piglets were vaccinated at 3 weeks of age with either the vaccine or a placebo. All animals were challenged at 7 weeks of age with the PCV2d strain. Loads of PCV2 DNA were measured in the blood up to 3 weeks post-challenge. Besides that, a pool of serum or faecal material was generated from all vaccinated and challenged or non-vaccinated and challenged (control) pigs on day 21 post-challenge. Those serum or faecal pools were administered to contact pigs by the intramuscular or oral route to check the transmission capacity. Viraemia as well as nasal and faecal shedding were significantly lower in vaccinated pigs, compared to the control group.

Contact pigs exposed to faecal material from control pigs were PCV2 viraemic at 14 days post-challenge and also shed PCV2 DNA in nasal and faecal excretions, while PCV2 DNA was not detected in vaccinated and challenged pigs.

Figure 2 – Percentage of viraemic pigs with the viraemia higher than 6log10/ml. 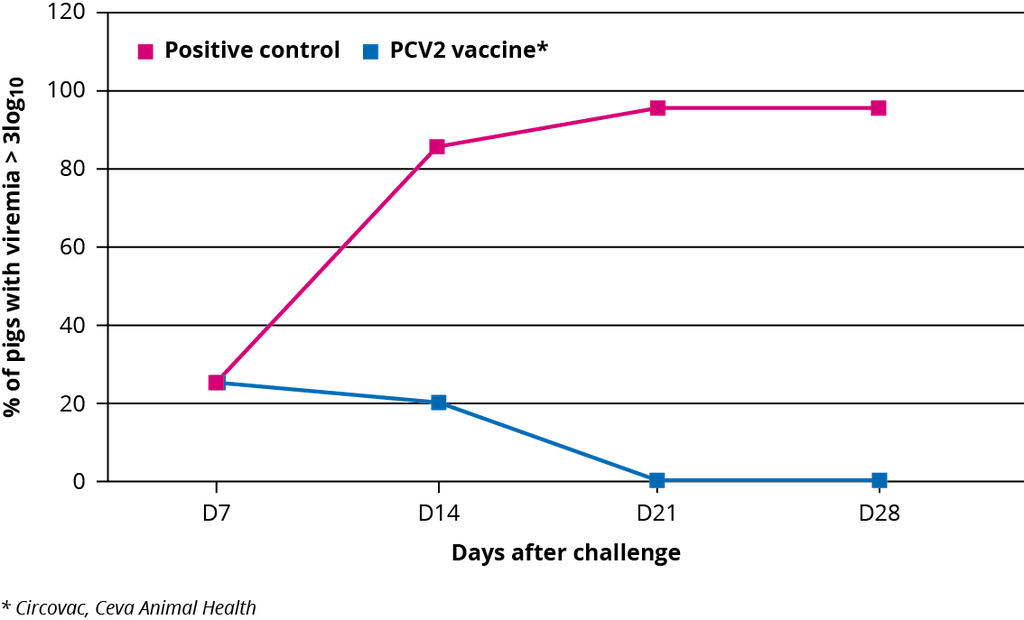 In another trial, piglets were vaccinated at 3 weeks of age with 0.5 ml or did not receive a vaccination as control group. All were challenged at 10 weeks of age (day 0) with the virulent PCV2d strain. Pigs were sampled weekly and sacrificed 4 weeks later (day 28). The method qPCR to measure virus loads was used for vaccine efficacy evaluation.

In comparison to the control group, already on day 21 post-challenge, the percentage of pigs with Ct<33.4, which corresponds to high viraemia status, was lower in vaccinated pigs. this is equivalent to approximately 6log10 dna particles ml, see Figure 2.

On day 28, serum virus contents differed significantly among the groups with median values 0; and 8.01 log10 copy number/ml for the vaccinated group and control the control group respectively (p<0.05), see Figure 3. This high viraemia in the control represents in field conditions a high risk for PCV2 systemic disease manifested by wasting and increase mortality.

The significant reduction of virus DNA in the lymphoid tissue was observed in vaccinated pigs. The vaccine demonstrated a high efficacy against the experimental infection with PCV2d.

PCVDs remain a common problem in many swine farms. Strains of different genotypes of PCV2 are circulating in the herds. The PCV2d seems predominating particularly in farms with clinical forms of PCVD. Vaccination of piglets with Circovac proved to be efficient in protection against PCV2 strains belonging to this genotype. Vaccination also prevented the transmission to the susceptible contact pigs. Those results demonstrated that piglet vaccination is an efficient tool in the control of PCVD.

Want to read more articles from the latest issue? Go to the digital magazine and log in with your current details!

How is Brazil getting on with eradicating CSF?