Although the UK is coming out of the European Union, the country is still pushing forward with antimicrobial usage targets in the major animal species. Health expert David Burch thinks it might be useful for other member states to consider their impact.

In the UK, we had the O’Neill report (2016) finally published, suggesting that the UK should have an overall target of 50 mg/kg biomass. This caused some consternation as how he interpreted biomass, but he was using the current approach by the European Surveillance of Veterinary Antimicrobial Consumption (ESVAC), using total consumption of farm animal antibiotics per kg of animal produced or imported/exported to come up with the final Population Correction Unit (PCU).

This is fine and may be achieved sooner if reports of usage reduction are to be believed. Then they are saying, beyond 2018 they want species-specific targets and these are being considered now, but you need good and reliable usage data by species to set these targets and this data is currently not always available.

Unfortunately, targets can be a movable feast too, as the Dutch have found out. First it was a 50% reduction, which they achieved quite quickly by banning in feed premixes and medicated feed. This was then increased to an arbitrary 70% reduction and they have plateaued just short of 60%.

In PCU terms they have come down from 114 mg/kg PCU in 2011 to 68 mg/kg PCU in 2014, which is commendable. Between 2009 and 2014 they fell from 495 tonnes of active antibiotic to 207 tonnes, a 58.2% fall. Tetracyclines accounted for 63% of the total fall, but you have to question the significance, as they are not considered Critically Important Antibiotics (CIAs) in the WHO classification, unlike fluoroquinolones, 3rd & 4th generation cephalosporins, about which they were more concerned with regard to human health.

Controls were put on the CIAs as well but a general overall target can be very non-specific and potentially meaningless.

Spain has also actively grown in this time period, whereas the majority of countries have fallen, especially Germany, which was the largest user in 2011 at 1,819 tonnes and is 1,314 in 2014. This improvement has continued through 2015 too, reportedly down to 800 tonnes following the introduction of monitoring schemes.

O’Neill felt that the Danish model was the best target of 44 mg/kg PCU overall. From a pig perspective most of the antibiotic used (75%) or 81.5 tonnes were used in 74% of PCU live biomass or 1,766 thousand tonnes. This then expresses itself as approximately 46 mg/kg PCU for Danish pigs, which is a substantial pig industry producing approximately 20 million slaughter pigs and 10 million growers for export.

In the UK, we have seen sales of antibiotics fall by 10% from 445 tonnes in 2014 to 404 tonnes in 2015. The amount of antibiotics going into 90% of chickens, turkeys and ducks has also been identified as 46 tonnes in 2015. So making some minor adjustments for the other 10% and for laying hens, game birds and some cattle use we can estimate pig use at approximately 250 tonnes.

I have always been in favour of keeping things simple so liked to use mg/kg liveweight or deadweight (liveweight/0.75) and developed a spreadsheet to monitor this and thought the average usage was about 160 mg/kg liveweight (see Figure 1) or possibly lower.

However, if we are to use PCUs then approximately 10 million pigs slaughtered at 100 kg liveweight would have a 250 mg/kg liveweight usage and 333 mg/kg deadweight and using an average PCU of 65 kg as the average treatment weight, it comes out at 385 mg/kg PCU, nearly 8 times the Danish usage. 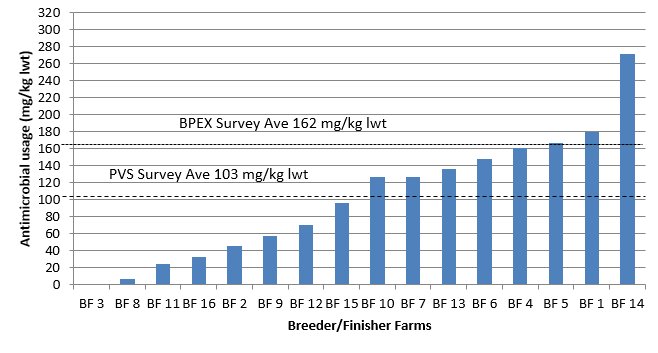 Effects of monitoring on usage

Monitoring usage also allows farmers and vets to discuss their usage and for the farmers to properly assess the cost of medication accurately and compare that cost with other procedures such as disease eradication, vaccination or by making improvements to management, ventilation and hygiene. In-feed medication can cost usually between €15-30/tonne, it is not insignificant when all totalled up.

This seems to be so important to make the most of this new situation. It is anticipated that usage will continue to fall although data for 2016 will not be available for some time. It is anticipated that a further reported drop may be another 20% for this year but we will have to wait and see but could bring pig use closer to 300 mg/kg PCU.

Personally, I don’t like random or arbitrary targets e.g. let’s reduce usage by 50-70%, I prefer to have specific objectives ‘what are you trying to achieve, what are the concerns and how can we get there?’

I think we have been over-using antibiotics in the UK pig industry and used them as props, when we have disease outbreaks due to poor biosecurity, poor housing and sometimes poor management. However, producers had to deal with strong EU market competition as 50% of our pork is imported. As diseases have built up like mycoplasma pneumonia plus PRRS virus pneumonia plus swine influenza plus Actinobacillus pleuropneumoniae and so on, we have used antibiotics to mitigate the problems and keep production going.

I think when these new regulations and requirements roll out in the UK and across the EU we are going to seriously have to address our deficiencies. On the other hand, each country and each farm is in a different state of development and just to assume that one country can hit this target, every other country should also reach it is a bit naive, seeing the huge variations in usage.

Squeezing the industry too far

There are also some reports that squeezing the industry too far can have negative repercussions on the health, welfare and subsequent production of the animals, as is the case of Denmark, so is that too low? Getting to 100 mg/kg liveweight or 150 mg/kg PCU would be quite an effort but potentially achievable in time.

Hopefully, governments will move forward cautiously yet steadily allowing to get buy in from producers and vets, without bullying and antagonising them. They must be able to utilise sound data and set rational yet achievable targets over a sufficient time period to manage them.

The main driver is the huge resistance problems that are coming in the human/medical field, our efforts won’t stop this but if we can help in a small way then it will prove worthwhile.