Where there is a will, there is a way: the story of the successful bid to host the IPVS 2012

Looking back at my first IPVS Congress 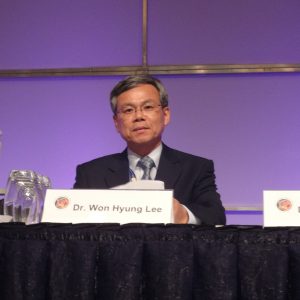 Was the chairman of the IPVS 2012 Organising Committee. He studied Veterinary Medicine at Seoul National University and obtained his PhD at Chungbuk National University, Korea. He worked at Sunjin company, the largest swine group in Korea, for eight years and developed the SPF (Specific Pathogen Free) breeding pig herd in Korea for the first time. From 1996 to 1999, he was a research fellow at the Clinical and Population Science in University of Minnesota, specialising in the field of PRRSv and SIV. In 1999, he worked at Designed Genetics in Canada as a project leader and succeeded in eradicating PRRSv from breeding stock. After that, he was appointed as an executive director and president of Darby Genetics and Shinki Swine Farm company, the largest swine breeding company, respectively where he worked from 1999 to 2005. During that time, he contributed to introducing ISO 2000 in Al station and HACCP at the farm level for the first time in Korea. Since 2005, he has been the president of XP Bio, a swine research farm which carries out various kinds of swine trials and supplies pigs for experimental purpose. In addition, since 2003, he has been a member of Advisory Committee of National Veterinary Research and Quarantine Service and the Korea Swine Association. He also founded APVS and organised the first APVS Congress in Seoul, Korea in 2003, and served as the president of the Korean Association of Swine Veterinarians in 2003 and 2004. Dr Lee has also lectured at Seoul National University as an invited professor, written several publications in scientific journals, and received an award from the minister of agriculture, forestry and fishery for his contribution in the swine industry.