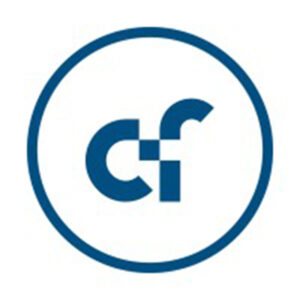 Today’s pig farms must use technology in harmony with human inputs if the business is going to succeed and be profitable.

Traditionally, pig units have been very labour intensive requiring many people to work on the farm’s long hours seven days a week. 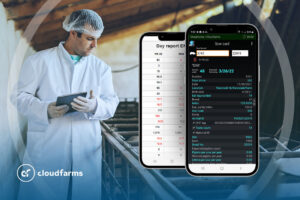 That labour requirement is currently proving to be a huge challenge on pig farms as people do not want to work in such tough conditions, making it hard for farmers across the world to find staff.

However, that’s where technology can step in to solve the problems, taking the labour out of most of the jobs required on a pig farm and substituting them with solutions that can be controlled from a mobile phone.

Clever use of technology

Founded by 2 Danish professionals, Cloudfarms has emerged into a global leader in data management for breeding and production sows as well as finishers, with local customer support teams sited across the United States, Europe, and Asia. Multi-site pig producers in over 40 countries already run their business more efficiently with the help of Cloudfarms.

It is a comprehensive, fully cloud-based pig management system developed to address the requirements of modern multi-site pork production. Basically, data is recorded, processed, and utilised 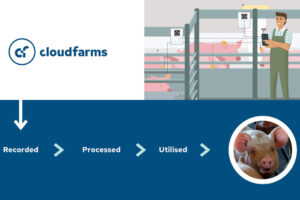 from every stage of pig production in the units by software developed by Cloudfarms.

This gives production managers and farm managers collective knowledge and control of how their farms and units are performing and advises them where alterations can be made to increase performance or efficiency.

The target market is the large pig farms as well as medium sized sow breeding farms with at least 1,000 to 2,000 sows. Currently, the largest customer using the technology manages 170,000 sows, with numerous other customers running 20,000 to 50,000 sows in their respective units.

By using real-time data via a mobile app, which is updated every 20 minutes, the technology allows staff to monitor the pigs from a distance on their phones or monitors.

This platform makes it easy and less time consuming for the staff to record the daily registrations like servings, farrowings, weanings and feed consumption. 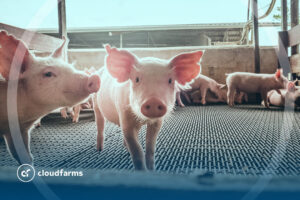 As soon as the device connects to Wi-Fi, it synchronises, and data is seamlessly transferred to the web allowing real-time production results to be displayed in the reports on the TV. This eliminates the need for a hand-written whiteboard and with real-time data there is no delay waiting for records to be entered.

Many users of the app have reported significant time savings when inputting the data. Another advantage is that the system is very user friendly and even non-technical oriented staff can master the app within days.

What the farmer said

Henrik Bovbjerg is the co-owner of Bovbjerg Genetics and Bovbjerg Ecology. He runs 1,000 sows and is the largest organic multiplier in Denmark.

Henrik says: “We use Cloudfarms for all registrations. First of all it saves us a lot of time, as we don’t have to spend time writing the data down from a piece of paper and we always have the phone with us anyway.

“It gives me a very good overview as the owner of the pig productions that we can see all registrations a few seconds after they have been entered. In addition, we use Cloudfarms to keep track of the gilts stock, so we always know how many gilts we have for sale in the various weeks and how many we have made an agreement on.

“Last but not least, it is a super registration tool for medicine, so you know you get all the right registrations, and no notes get lost. This gives a great deal of security during checks, of which we have many in particular for the organic part.”

It costs a lot of money for farmers to source and train workers for their pig units so they have to ensure the working conditions are attractive to retain that labour.

By using Cloudfarms technology, farmers can immediately take their pig units into the 21st century and create working environments that are attractive to young professionals and skilled workers.

This will reduce the misconceptions some people have about working on pig farms, instead providing long-term careers for those with the vision to make technology work.

The mobile app is designed for fast data entry on large farms saving a lot of time and ensuring the data is validated in real- time.

Jens Krogsgaard Jorgensen runs Kibsdal Svineavl in Denmark which is a Danbred breeding farm with a total of 2,000 sows.

Jens says: “We are very happy to use Cloudfarms as it helps us to do the registration easy and quickly in the units. The function with the QR Code in the app makes it easy for use to put in the right data on the right sows.

“It is a huge advantage that the program is in live data. So, all employees have the same data set all the time. The Cloudfarms support team is always ready to help us when and if we need them,” he says.

Why do pork producers use a traceability system?